For some reason this reminds me of a scene from Johnny Dangerously where Danny DeVito is trying to bribe the D.A. and one of the things he offers him is a new automatic oven that can “cook a turkey in less than a day!”. 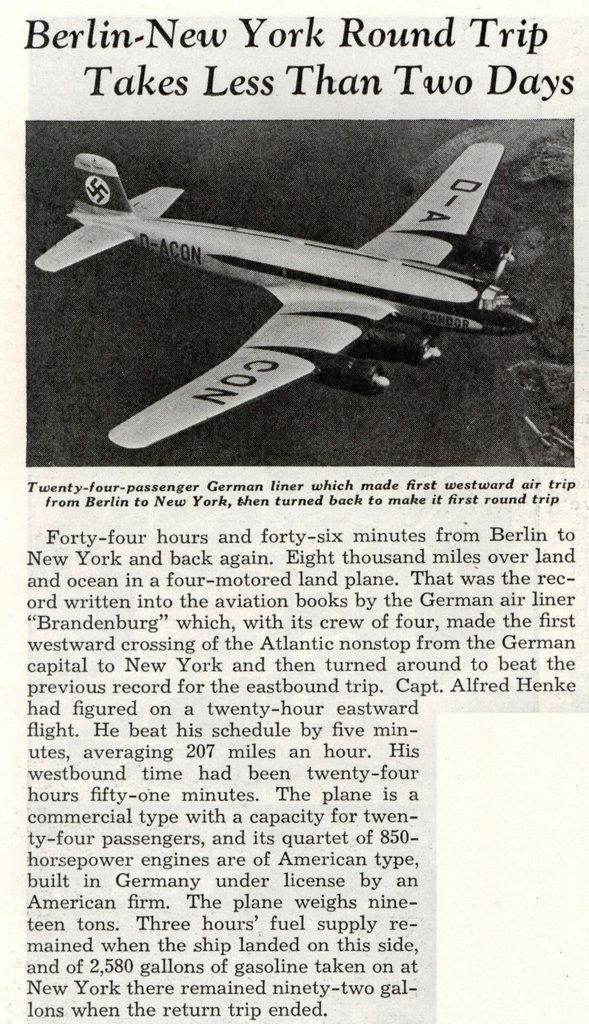 Forty-four hours and forty-six minutes from Berlin to New York and back again. Eight thousand miles over land and ocean in a four-motored land plane. That was the record written into the aviation books by the German air liner “Brandenburg” which, with its crew of four, made the first westward crossing of the Atlantic nonstop from the German capital to New York and then turned around to beat the previous record for the eastbound trip. Capt. Alfred Henke had figured on a twenty-hour eastward flight. He beat his schedule by five minutes, averaging 207 miles an hour. His westbound time had been twenty-four hours fifty-one minutes. The plane is a commercial type with a capacity for twenty-four passengers, and its quartet of 850-horsepower engines are of American type, built in Germany under license by an American firm. The plane weighs nineteen tons. Three hours’ fuel supply remained when the ship landed on this side, and of 2,580 gallons of gasoline taken on at New York there remained ninety-two gallons when the return trip ended.