Bernard Shaw’s Rotating House Is an Aid to Health (Aug, 1929) 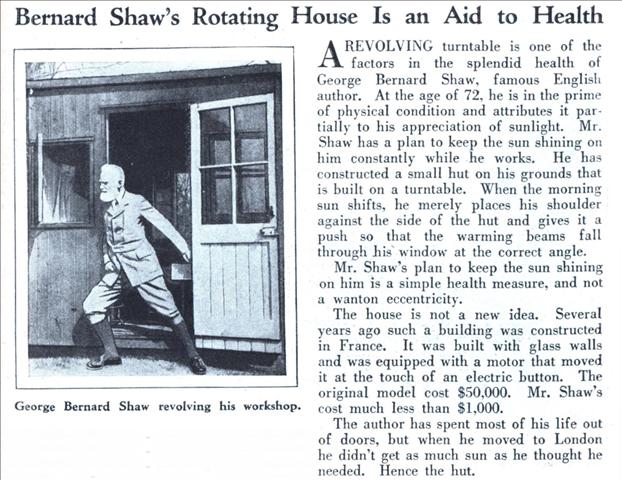 Bernard Shaw’s Rotating House Is an Aid to Health

A REVOLVING turntable is one of the factors in the splendid health of George Bernard Shaw, famous English author. At the age of 72, he is in the prime of physical condition and attributes it partially to his appreciation of sunlight. Mr. Shaw has a plan to keep the sun shining on him constantly while he works. He has constructed a small hut on his grounds that is built on a turntable. When the morning sun shifts, he merely places his shoulder against the side of the hut and gives it a push so that the warming beams fall through bis window at the correct angle.

Mr. Shaw’s plan to keep the sun shining on him is a simple health measure, and not a wanton eccentricity.

The house is not a new idea. Several years ago such a building was constructed in France. It was built with glass walls and was equipped with a motor that moved it at the touch of an electric button. The original model cost $50,000. Mr. Shaw’s cost much less than $1,000.

The author has spent most of his life out of doors, but when he moved to London he didn’t get as much sun as he thought he needed. Hence the hut.