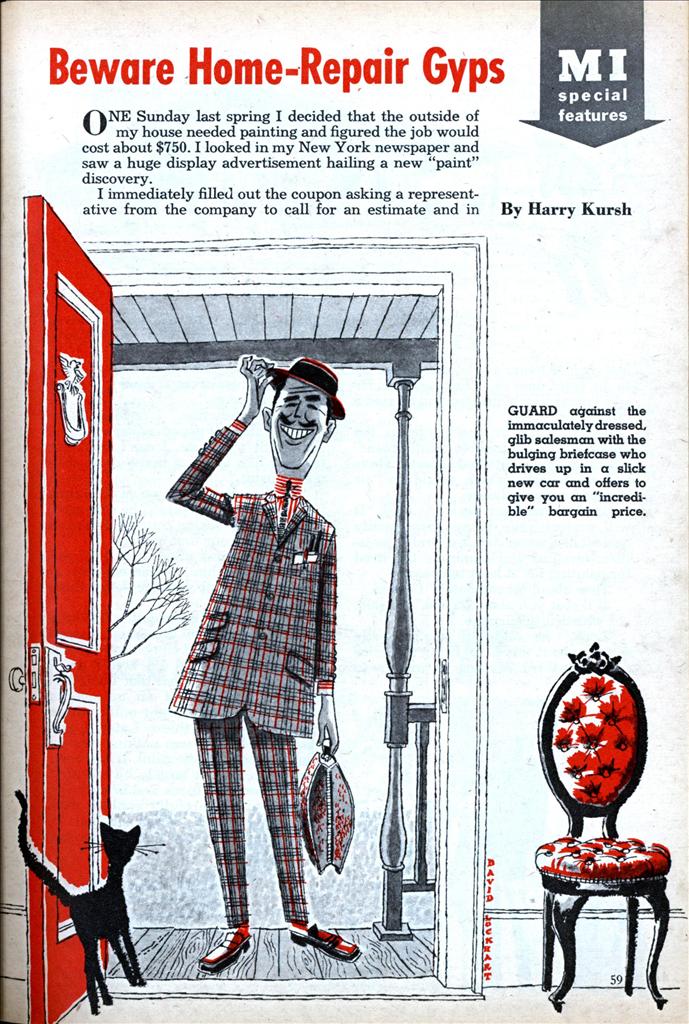 ONE Sunday last spring I decided that the outside of my house needed painting and figured the job would cost about $750.1 looked in my New York newspaper and saw a huge display advertisement hailing a new “paint” discovery.

I immediately filled out the coupon asking a representative from the company to call for an estimate and in less than 48 hours a salesman pulled up to my front door in a slick new car. He was immaculately dressed and carried a bulging briefcase.

He explained in glowing terms the details of the “incredible mastic paint” which, he said, contained asbestos fibers and mica flakes which would be “air blasted” onto my house.

“It won’t warp or peel,” he said. “It will protect your house permanently against fire, water damage, drafts, moisture, termites and eliminate the need for painting for at least ten years.”

“How about an estimate?” I asked.

I whistled in surprise.

“Look,” he said, “If you’re really serious about this I can bring the price down one-third. My boss is anxious to get in this area. You have a nice house. Just let us use it as a model to snow future prospects.”

“That sounds fine,” I nodded, as he shoved a stack of papers under my nose. “But wait a minute. I can’t sign that fast. I’d like to see a house done with mastic paint.”

“Oh, the only houses we’ve done thus far are on the West coast,” he shrugged. “We’re just breaking into the East and you’re one of our first contacts.”

“Well, I’ll think about it and let you know,” I told him. I wanted time to check his company with the Better Business Bureau.

A week later I got a letter from the New York Better Business Bureau warning me that if I signed to have my house mastic-painted I’d better get a lawyer and face the fact that I had gotten the short end of an outrageous swindle by a fly-by-night outfit whose guarantee was worthless. Later, I also learned that there was nothing new or amazing about mastic paint. It had been used for years but largely by industry to cover concrete block and brick walls I and has to be carefully applied after \ costly preparation. When applied to ‘ wood siding, like my home and most other homes, it would begin to flake and powder in the first rain and actually cause the wood to deteriorate rapidly.

I reported the results of my investigation to the New York newspaper and the gyp company’s ads were barred from their columns. Unfortunately, however, countless thousands of home owners are still being rooked by the same mastic paint racket and thousands more by dozens of variations of home repair gyps.

“There’s hardly a product or a service offered the home-owner today,” says the Wall Street Journal in a recent home-repair business survey, “that some shady operator somewhere hasn’t taken up. Almost any repair job, from $50 to $5,-000, may attract a repair gyp.”

Says Victor H. Nyborg, president of the Association of Better Business Bureaus: “Americans this year are spending an unprecedented amount on home improvement and the gyps are getting their share of it.” According to Mr. Nyborg, before the year is out phonies knocking on your door will rake in some $500,000,000. And this is only a conservative estimate.

The most rampant racket is the one that almost hooked me—the “model home” angle. If it isn’t “mastic paint,” it is one of a thousand ingenious variations. Consider the one they pulled recently on a New Jersey home-owner. A salesman knocked at the door and announced that he was from a new company in New York.

“We’d like to do business in this area with a new aluminum siding,” said the salesman. “And we’ve selected your house as a model. We’ll give you a whole new siding job free if you’ll let us take pictures of your house and use it for advertising purposes.”

Free! Who can resist such a deal? This home-owner signed up promptly and got his job done just as promptly— plus a bill for $1,960! He!s now paying off that note at the rate of $67.93 a month because what he didn’t know when the salesman shoved a batch of papers under his nose to sign was that one of them was a bank loan authorizing the new siding job.

Another angle to the “model home” trap turned up a few months ago in Memphis, Tenn. A gyp outfit there convinced dozens of home-owners in a single community that their homes had been carefully selected for a package “model” deal.

It included the installation—at cost—of a combination garbage disposal-dishwasher unit and a free supply of soap for three years. The bargain price? Just $230. Few could resist. After the gyp outfit “went out of business,” the bargain package turned out to be valued at under $100.

Right now law enforcement officers and Better Business Bureaus from coast-to-coast are desperately trying to alert all Americans—home-owners as well as city folk in apartment houses—against the ravages of the “switch” game. In this neat little art the technique is simple: advertise an irresistible bargain and then when the sucker is ready to buy, switch! Get him to buy something more expensive. The switch artist uses everything from outright lies to persuasive appeals to vanity. He invariably operates early in the working day when he can be reasonably sure the woman of the house is alone. The product advertised —called the “bait”—is usually a genuine bargain but, as they say in the racket, “It’s nailed to the floor.”

If you’re smart enough to spot a “bait” advertisement you can forestall a switch by insisting on the original bargain, although you may have to fight like hell to get it. In most cases if you persist in wanting the bargain the salesman will curtly announce that it will be delivered to you. But that’s the last you’ll hear of it or of him.

One of the biggest baits today is the lure of astonishing bargains in storm doors and windows. It’s not unusual for a switch outfit to offer storm windows at $7.77 each plus a free storm door and free installation. But when the salesman calls the line might go something like this: “Shucks, mister, we didn’t know you had such a nice home. These windows are all right for the price but they really belong in a much cheaper home. Of course, if you insist on having these I feel it’s only fair to tell you that you’ll have to brush them up once a week with steel wool to keep them from getting rusty and losing their shine.” Before the salesman’s through he’s got the sucker convinced that storm windows costing three times as much are just as good a “bargain.” They rarely, if ever, are.

A growing menace in the use of repair services is the gyp who poses as a phony inspector. Take, for instance, the phony who walked in on a Providence, R. I., housewife and said he was from the home heating and fuel “Safety Department.” He meant from his own company but he made it sound official. The innocent housewife let him “check” the condition of her furnace and in a little while the “inspector” was up from the basement with a look of distress on his face.

“Madam, it’s a lucky thing I came around when I did. The furnace of yours is in dangerous condition. Could have blown up any minute.”

“What shall I do?” the shocked housewife asked.

“You’ll have to shut it down. And I warn you not to start it up again.”

Luckily, the inspector knew a repairman who would come over immediately in an emergency. In a few minutes the repairman—actually a confederate from his here-today-gone-tomorrow outfit—was at the house with a pickup truck full of tools and spare parts. Before the hour was up the housewife had signed on the dotted line for nearly $250 worth of repairs and new parts.

Special targets for the gyp kings are home-owners who have, or had, FHA-insured loans for home repairs and improvements. The fakers come around as FHA inspectors, saying they merely want to check up on the condition of your property. They spring the gag that if you’ve had FHA assistance you’re obligated to keep your home in good condition. Naturally, they always find something wrong and they always know the right man who could fix things up in a hurry at a bargain price. The FHA constantly warns that it has no such inspectors but that doesn’t faze the gyps who rake in fast profits from one town after another.

In Kerrville and Corpus Christi, Texas, scores of home-owners got stung by a couple of sharpies who “inspected” their homes for termite and insect infestation and succeeded in selling them worthless exterminating chemicals.

Of course, not every bargain is bait for the switch gyp. Most merchants are reputable. Most repair contractors and servicemen are honest. But if this causes you to let your guard down, you’re playing with fire.

What can you do to protect yourself? First, make sure you alert the women of your household. Then follow this advice I have compiled from such sources as the FTC, the FHA and Better Business Bureaus: 1. Never deal with an individual or firm whose reputation is not known to you.

2. Never sign a contract, sales slip, or certification of “satisfactory completion” of a job without reading what you sign, especially the fine print.

3. Remember that an FHA-insured loan for home improvement or repairs is no guarantee or protection.

4. Never deal with a salesman who tries to talk you out of an advertised bargain.

5. If the merits of a product sound too good to believe, check up before you buy.

6. Beware offers from pitchmen who want to use your home as a “model.”

7. Unless you are sure of the outfit you’re dealing with, always get more than one estimate on a home-repair job.

8. Don’t be won over by long-term guarantees.

9. If anyone comes posing as an inspector of any kind, ask for absolute identification.

Stick to these rules and chances are the gyp artists will have to ring someone else’s doorbell. If you have any doubt at all about the caller at your door, you can’t lose by saying, “No, thanks!” •