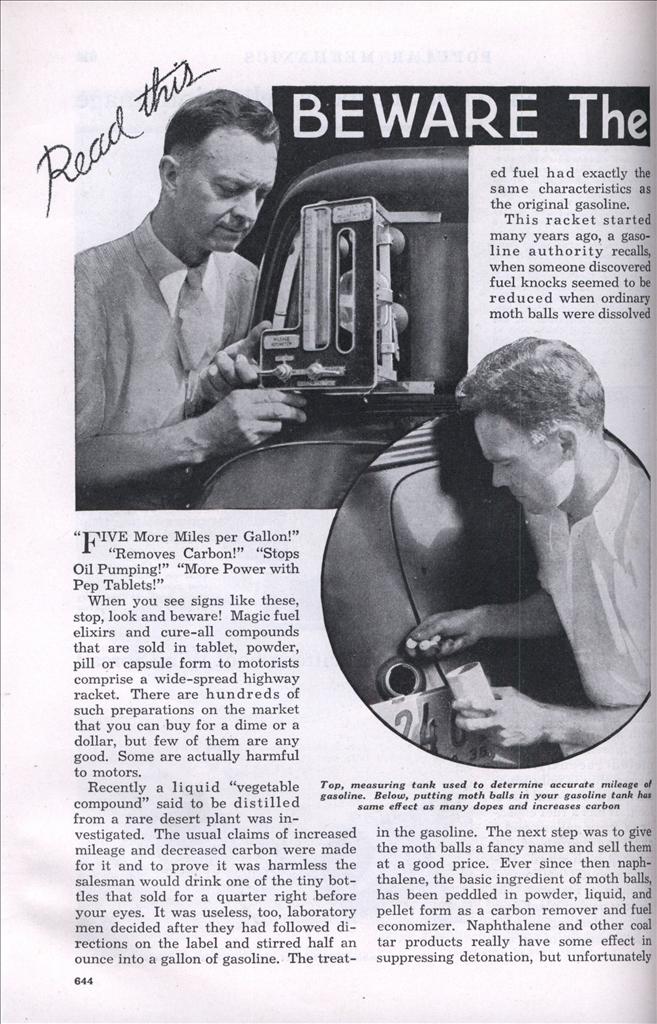 When you see signs like these, stop, look and beware! Magic fuel elixirs and cure-all compounds that are sold in tablet, powder, pill or capsule form to motorists comprise a wide-spread highway racket. There are hundreds of such preparations on the market that you can buy for a dime or a dollar, but few of them are any good. Some are actually harmful to motors.

Recently a liquid “vegetable compound” said to be distilled from a rare desert plant was investigated. The usual claims of increased mileage and decreased carbon were made for it and to prove it was harmless the salesman would drink one of the tiny bottles that sold for a quarter right before your eyes. It was useless, too, laboratory men decided after they had followed directions on the label and stirred half an ounce into a gallon of gasoline. The treat- in the gasoline. The next step was to give the moth balls a fancy name and sell them at a good price. Ever since then naphthalene, the basic ingredient of moth balls, has been peddled in powder, liquid, and pellet form as a carbon remover and fuel economizer. Naphthalene and other coal tar products really have some effect in suppressing detonation, but unfortunately they create excessive carbon deposits in the combustion chambers, leaving the motor in worse shape than it was before.

A typical “magic gas” powder about which startling claims were made was investigated by the Milwaukee Better Business Bureau. After its tests the bureau issued a warning that the powder neither increases the power nor the octane rating of a fuel, hence it has no effect on economy.

The Bureau of Standards, after testing hundreds of such compounds, declared that “in no case has the treatment of gasoline with one per cent or less of such dope been found to have any significant effect, beneficial or otherwise, unless the dope affects the tendency of the fuel to knock or detonate.” A publication of the American Automobile Association reported after similar tests that not a sin- gle instance had been found in which fuel dope decreased carbon deposits, knocks, or caused any improvement in the general operation of the automobile to an extent that could be measured.

Don’t let a money-back guarantee fool you. One company offered to refund the purchase price of ten bottles if they failed to reduce the carbon. The company will do exactly that, if and when a disgruntled customer comes in with the empty bottles and definite proof that carbon was not reduced. The point is that few customers will use that many bottles, and only a few of those who do will bother to claim the guarantee if dissatisfied. This is known as the “one tenth of one per cent racket,” which is just about the percentage of dissatisfied customers who actually ask for their money.

One man who had a “more miles” compound claimed he extracted it with kerosene from a rare mineral deposit. Perhaps he did, a laboratory staff for an oil company admitted after they tested it, but they couldn’t find it improved gasoline. Another had a dope he declared was a splendid mileage improver because it was highly radioactive. The laboratory test staff rejected it too after tests showed that no matter what else it might be good for, it was useless as a fuel ingredient.

In another case a laboratory tested a dope and found it did all the inventor claimed. The liquid had splendid antiknock qualities but a complete analysis showed the material contained tetraethyl lead, a recognized anti-knock compound, which the “inventor” had secretly added to his mixture. In another instance an aromatic compound extracted from Indian tea looked good until it was learned that copious quantities of benzol were required in the extraction process. This was a case in which the discoverer was unaware that benzol alone is a very effective knock suppressor. But benzol, at about forty cents per gallon, is too expensive to use as a knock inhibitor in the quantities necessary.

The oil companies are not interested in testing compounds of lead, iron, nickel, aniline, benzene, or xylene. The anti- knock properties of these materials are well known and the ones with any actual value are already patented and available in the regular gasolines of responsible oil companies. One service-station operator in California ran his fuel business up to 3,000 gallons per day with a proposition that seemed sure-fire. He explained his gasoline gave better mileage because it contained a secret compound smuggled to him from Germany. He urged every customer to check the mileage from five gallons of ordinary gasoline, then have any remaining fuel drained from his carburetor, and fill up with five gallons of his special gas. Invariably the customer found he really did get two or three more miles per gallon with the treated brand. The secret of this performance was that when the service-station operator put in five gallons of his own fuel for a test run he always threw in a half gallon or more extra gasoline. This was hardly enough to register on the average gasoline gauge and yet was enough materially to increase the distance five gallons of fuel would go.

An even greater hoax was the tablets that seemed to change water into gasoline. In this case the “slicker” would drive into a service station and calmly fill his fuel tank with water from a hose. Then, to the amazement of the attendant, he would drop a couple of pills into the tank and drive off, his engine running as well as ever. Naturally, after this happened a few times, the attendant would give almost anything for some of the pellets. The motorist would explain that ordinarily he didn’t sell any pills but finally would part with several packages he had in the car, getting $15 or $20 for enough to “convert 500 gallons of water.” That was the last the service-station man ever saw of his money or the motorist. The answer, of course, was that the motorist had a hidden fuel tank and the rear tank into which he poured the water was just a dummy.

“Motors Overhauled, Fifty Cents per Cylinder,” is another bait on which many drivers bite. The advertisements usually state lost compression is restored, rings are freed, valves reseated, and other benefits are performed by capsules or paste placed in the combustion chambers. The capsules generally contain some form of mica and wax that builds up on the walls of the cylinders. The benefits are extremely temporary, experts explain. What really impresses the motorist is the improved performance that comes from the good tune-up that is given as part of the installation service. Better business bureaus say the pellets are sometimes used as “come on” inducements to attract drivers into a garage. Then strong efforts are made to sell them new coils or other expensive ignition parts so “the compound will have a fair chance to help the motor.”