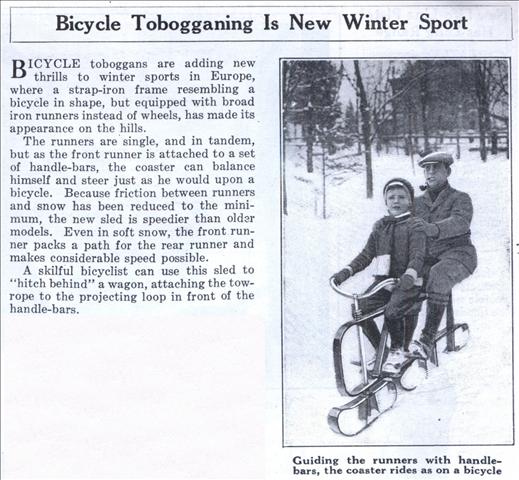 BICYCLE toboggans are adding new thrills to winter sports in Europe, where a strap-iron frame resembling a bicycle in shape, but equipped with broad iron runners instead of wheels, has made its appearance on the hills.

The runners are single, and in tandem, but as the front runner is attached to a set of handle-bars, the coaster can balance himself and steer just as he would upon a bicycle. Because friction between runners and snow has been reduced to the minimum, the new sled is speedier than older models. Even in soft snow, the front runner packs a path for the rear runner and makes considerable speed possible.

A skilful bicyclist can use this sled to “hitch behind” a wagon, attaching the tow-rope to the projecting loop in front of the handle-bars.