Interesting article about the consequences of computerization at the IRS. 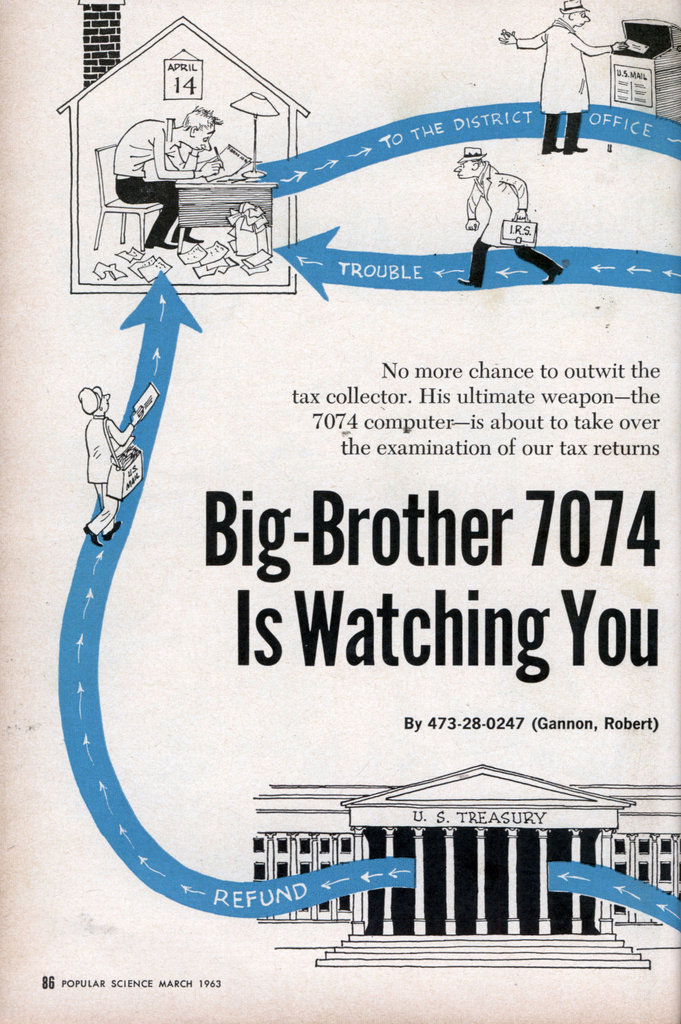 Big-Brother 7074 Is Watching You

No more chance to outwit the tax collector. His ultimate weaponâ€”the 7074 computerâ€”is about to take over the examination of our tax returns

IN THE rolling West Virginia hills, just east of Martinsburg, squats a low-slung, brick and cinder-block building. Inside, in a starkly antiseptic, 40-foot room, the head of a many-tentacled IBM computer waits patiently for your tax return.

If you live in a southeastern state, your time is up; a few days after you file this year, the machine will digest your forms, think about your figures for a millifraction of a second, spit them out if unsatisfied. If you live in Pennsylvania, New Jersey, Delaware, Maryland, or Washington, D.C, you have a year of grace; your turn will come next spring. By 1966, returns from every taxpayer in the U.S. will be fed to the Martinsburg machine.

So far as the Internal Revenue Service is concerned, your personality, history, and spirit are worth only a four-inch hunk of half-inch-wide recording tape. You and 116,000 others will be

reduced to magnetic specks on a single reel about the diameter of an LP record. Data on every taxpayer in the country will fit into a living-room-size storage rack containing 500 miles of tape.

If your accounts are straight, you have nothing to worry about. You may even get your refund check sooner. But if you’re someone who forgets, fakes, or fouls up the forms, you’re in for trouble.

When I visited the computer center recently, what hit me strongest was the aura of no-nonsense efficiency around the place. There were no rows of desks, no papers piled eyebrow high. Hardly a paper at all, in fact, for tax forms are transferred to recording tape long before they get to Martinsburg. Missing, too, were clacking typewriters, blowing fans, clerks gabbing around the coffee machine. The only sound was the relentless whirring and clicking of IBM’s 7074.

Seated in his gleamingly efficient office, John E. Stewart, Director of the National Computer Center, told me that when the program was first announced, people all over the country, figuring the jig was up, streamed into tax offices to confess past sins. Some were remarkable. At one office, a man turned in his 80-year-old mother. Said she hadn’t filed her tax return yet. Ever.

According to Internal Revenue Chief Mortimer M. Caplin, more than $700,000 has so far been voluntarily turned in by guilt-ridden taxpayers.

Automatic Data Processing (ADP) promises, strange as it seems, benefits to the taxpayer as well as to the government. Here’s how you’ll profit, according to tax authorities:

â€¢ Because the bulk of cheaters (both individuals and businesses) will be caught, the system will insure “the fairest distribution of taxes in the history of man.” You’ll be sure that the guy down the street isn’t getting away with something you aren’t.

â€¢ Last year some 50,000 refund checks were undeliverable because the owners had moved from one district to another. Now this won’t happen; the central computer will keep track of where you are.

â€¢ The computer will even notice those rare instances where a taxpayer overpays â€”not too often pointed out before.

â€¢ The machine will free thousands of employees to give you more “personal service.” Translated, this dubious benefit means more face-to-face tax collectors.

Not surprisingly, benefits to the IRS are even more plentiful. By 1966, for example, tax men will be able to punch a button and find out if anyone in the land failed to file a return, cheated on deductions, owes for previous years, or phonied the whole thing. Till now, communication between various tax districts has been nearly absent. With the new system it will be easy to put the finger on such people as the ex-lawyer who made out 56 returns for himself, all of them claiming refunds, in 16 cities.

How does the whole thing work? Well, let’s follow the return of hypothetical Oscar Farley of Mobile, a lathe operator. Old Oscar doesn’t do anything different this yearâ€”just files his papers barely before the deadline as always. In this case, the forms go to Oscar’s local District Director in Birmingham.

Here, Oscar’s return is checked for name, address, account number or Social Security number (and if you don’t have one now you’ll soon be given one), and signature. Last year, 62 percent of individual returns had unfilled blanks that would cause foul-ups with computers.

If Oscar enclosed a check, it is popped into the IRS bank account first thing, needless to say.

Off to the Atlanta Regional Service Center now goes Oscar’s return. Here Oscar Farley ceases to be; he changes, under the IRS numbers game, to 192-18-9505, his Social Security number. (Machines can’t digest names so well; there are 26 characters but only 10 digits. Besides, there may be a number of Oscar Farleys around; there’s only one 192-18-9505.)

In the Service Center, a clerical worker transcribes 192-18-9505’s forms to IBM punch cards. Each card has space for 10 rows of holes, 80 columns across. The first nine columns (on each card, if there are more than one) are taken up by the Social Security number. For a cross checkâ€”in case there’s a transcription errorâ€”the first four letters of Oscar’s last name, “Farl,” also are punched out. The remainder of the card is punched to code such things as income, last year’s tax, deductions, etc. As many as 12 cards might be needed for one return.

Oscar’s card is then fed into a type 1401 computerâ€”sort of a satellite of 7074 at Martinsburgâ€”which transfers the record to tape, along with those of several thousand other taxpayers whose forms came in the morning mail. At the same time 1401 is memorizing this data, it whisks through the arithmetic. If things don’t add up right, 1401 catches the discrepancyâ€”but Oscar isn’t told “about it yet. The computer merely notes it on the tape for Big Brother to spot later in Martinsburg.

When the reel containing Oscar and all the others is filled, it’s flown to Martinsburg. About once a week, all the reels that have come in are shoved into 7074’s maw to be arranged in numerical order.

At the same time, the computer will make a quick check with whatever Oscar’s employer (or employers, if he’s been moonlighting) has reported, will note what lathe operators are likely to make, will scan for any stock dividends unreported; and sniff around for anything else funnyâ€”like an extra wife or a three-year-old child born during the year.

While this prying is going on (at eye-blink speed), various data will be transferred to other tapesâ€”some to go back to the regional center, some to a Treasury disbursing office.

This latter tape is beneficial; it is translated into refund checks, after an audit to see that no money is owed from other years. (Some 36 million persons get refunds.)

Catching refund cheats. And, by the way, this is the first time that refund figures will be checked against a^naster file. No more of such wide-spread practices as wives and husbands filing separate returnsâ€”she under her maiden nameâ€”and each claiming the other as a dependent.

The other tapesâ€”the ones going back to Atlantaâ€”aren’t so favorable to Oscar. When they’re fed into 1401, out clatter mechanical letters at the rate of 600 lines per minute asking for more money, wanting more information, orâ€”woe, woeâ€”suggesting to the Atlanta agents that they ask old Oscar to come in for a little talk about that dependent named Spot.

In the meantime, Big 7074 automatically starts counting the days to see if Oscar answers in his allotted time. If not, it sends a magnetic note to 1401, and another letter is ground out, this one just a little nasty.

Is it worth it? This shift to automation is going to cost the government about seven million dollars extra a year. The obvious question: Will it be worth it?

Main answer is that if something isn’t done soon, our tax-collection system will be swamped in paper. In 1930 just under six million returns were filed. Last year the figure was almost 100 million. By 1980, 135 million returns should flood in.

Second, until now there’s been no central filing system. A guy could work half a year on the West Coast, work the other half in the East, and get refunds for low-income earnings from two different district directors.

Now, both jobs will be on his taped record.

And in the third place, 7074 will save the government money. Tax men figure that about 62 percent of all returns actually show something less than is really owed, usually in overzealous deductions. Each year, say the authorities, people cheat to the tune of four billion dollars in taxes. Collect just one additional dollar of this out of every $500, and you’ve paid for the system.

Computers can be keyed to look for normal deductions for specific items, chuck out any that look suspicious. They’re not infallible, though. Commissioner Caplin tells the story of one clerk who ran across an innocent-looking item: a woman’s deduction for a swimming suit lost in heavy surf. The clerk sensed something strange, however, checked the past forms, found that the woman had claimed the same deduction the previous two years. No computer is ever going to be that curious.

A bigger hole in the system is that very first interminable step, the point where your writing is deciphered and keypunched to cards by hand. In each Service Center, some 600 clerical workers will be hired to punch out 50 million cards a year. Electronics companies across the country are working furiously to design a practical optical scannerâ€”a machine to read your handwriting and transfer the data to IBM cards.

Phone hookups coming. Tax men are also looking toward the time when ordinary mail serviceâ€”another time-wasterâ€”will be cut down, when the master Martinsburg machine will talk by phone to its little Service Center brothers. Right now, line-rental charges are too high.

Eventually, large corporations could also be plugged into the system. Computers thousands of miles apart could talk taxes without any numbskull human interference. Banks could be hooked in, too, reporting who is getting interest payments. Real-estate and stock-market computers might tattle on who is making money. Machines in charity organizations could reveal amounts of donations. And hospital computers could report on individual medical costs.

Of course, there’s always the possibility that old 7074’s plug will be put in backwards, and millions of un-looked-for refund checks will be sent to delighted taxpayers. But it isn’t likely. Says Martinsburg’s chief: “No system is foolproof, but we’re doing our best to de-bug this thing.”