Very cool article from 1939 about the first programmable electronic sign in Times Square (think the grandfather of the Jumbotron). Every single change of a light, and there are 27,000 of them, is punched as a row on a 160 column roll of paper that gets fed through the vast machine. 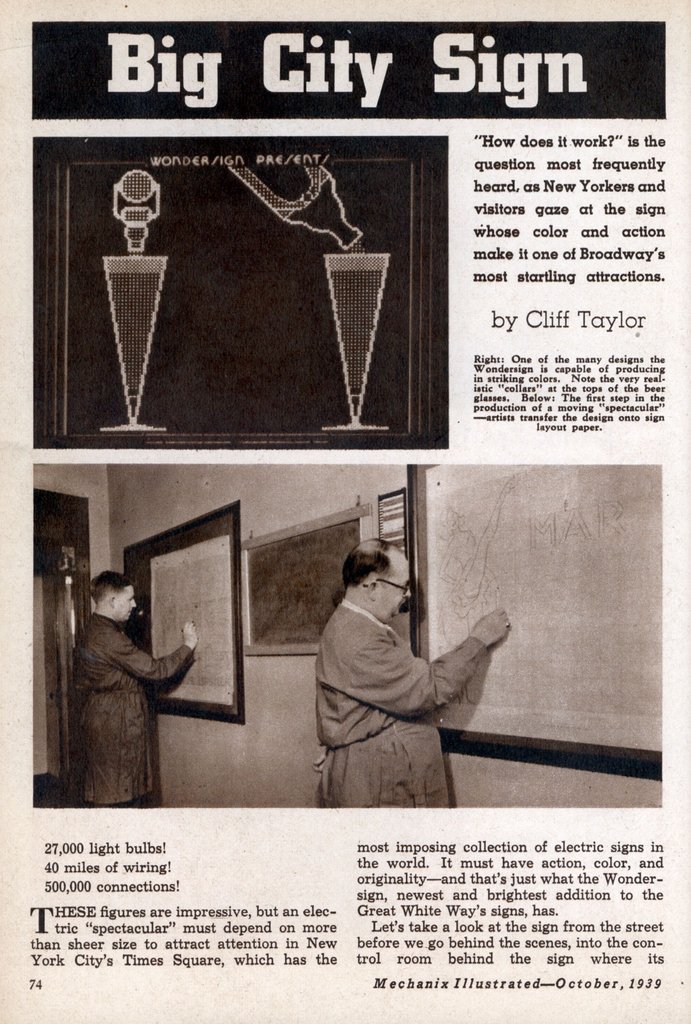 Oh, and in response to the question posed here:

“Well, there are nine holes to erase the sectors.”

“And nine for flashing the sectors on and off.”

“Andâ€”” Mr. Latz scratched his head. “There’s three more for something else, but darned if I know what they are!”

“How does it work?” is the question most frequently heard, as New Yorkers and visitors gaze at the sign whose color and action make it one of Broadway’s most startling attractions.

THESE figures are impressive, but an electric “spectacular” must depend on more than sheer size to attract attention in New York City’s Times Square, which has the most imposing collection of electric signs in the world. It must have action, color, and originalityâ€”and that’s just what the Wonder-sign, newest and brightest addition to the Great White Way’s signs, has.

Let’s take a look at the sign from the street before we go behind the scenes, into the control room behind the sign where its “brains” are located.

We see first, looking up at the sign, a great black squareâ€”but only for a moment. Suddenly a line appears, a white line which seems to be drawn by an invisible pen dipped in electricity. As we watch, the line moves swiftly, forming the outline of a glass. At the same time, another line is forming, a green line, which draws a bottle tilted above the glass.

Then out of the mouth of the bottle comes a flow of amber which even the strictest teetotaler can recognize as beer. It fills the glass swiftly, and reaching the top, forms a white and highly realistic “collar.” A moment later the sign has changed completely. It is now advertising something elseâ€”a show, a cosmetic, a restaurant, or any one of over two dozen different products, each with colorful, moving designs. When the King and Queen of England visited the city, the sign welcomed them with a brilliantly drawn crown.

“But how does it work?” asks the onlooker. “How can it be one color one minute and another the next? How is it able to make so many different designs?” Even sign-accustomed New Yorkers are puzzled by this brilliant “spectacular” that gives the illusion that an invisible pen is tracing a design; this sign that prints, writes, and draws in electric lights.

There’s only one way to find out. Let’s go up into the control room behind the sign. Our guide is Mr. Harry Latz, well-known New York advertising man, who owns the American and Canadian patent rights, and who is as proud of his possession as a boy with a new toy.

“It was invented by a Frenchman, Arnold Zouckerman, of Paris,” he tells us. “The improvements, and artistic and commercial adaption were “made by Jean Carlu, the famous French poster artist, who is now head of the Luminograph company, which operates a similar, but smaller, sign in Paris. The sign was first presented at the Paris Exposition in 1937, where it won the Grand Prize for electric sign advertising.”

He explains to us that he brought over a staff of French mechanics to install and operate the new sign, but that he is training American workmen to operate it, and nine more of the signs which he hopes to erect in key cities around the country within a year.

“The best way to understand the sign’s operation,” he says, “is to start at the beginning.” This seems a logical enough way to go about it, so we nod agreeably and follow him into art room, a large place equipped with drawing boards and wall boards at which artists are working.

“The first step,” says Mr. Latz, “is getting the design layout from the advertiser. Usually this is a rough sketch, which our own artists finish up, and then transpose onto sign layout paper.” He shows us the sign paper, which is transparent blue tissue imprinted with 27,000 white circles, each circle representing a light bulb. This tissue is tacked over the design, and the design is traced onto it.

“The thing that seems to puzzle people most about the sign, he continues, “are the colors. They see red in one spot one moment, green the next, and white a minute later. It’s really an optical illusion. We have four colors of bulbsâ€”red, white, green and amber. The first row of lights across the top of the sign is alternate red and white bulbs. The next row is alternate green and amber bulbs. The bulbs are closely spaced, and from the street it appears as if the same bulbs were giving off different colors.” As we leave the art room, Mr. Latz explains some of the sign’s workings. “The sign is divided into nine sectors, three across, three down. Each sector is divided into thirty zones, six across, five down. Each zone has 100 bulbs, ten across, ten down. It is this sectoring and zoning that makes the sign’s operations possible.” We are in another room now, confronted by an impressive looking machine with rolls of what looks like wrapping paper at one end.

“This is the Translator,” our guide informs us . “Here the artist’s design is translated onto this roll of paper in perforations like a player piano roll. The sign paper with the design is placed on this metal easel and the operator punches holes with an electric punch. The electric punch completes a circuit which makes another punch put a hole in the right place on the roll paper.”

“But how about the colors?”

“The artist’s design shows the colors wanted. The man with the punch punches only red holes if they are indicated; or green holes; or amber; or white. As a check, those lights above the board flash on to let him know just what color he’s punching.”

“But it doesn’t take one hole to light a light. It takes three.”

“Three? But that would meanâ€””

“No. It wouldn’t. Perhaps I’d better explain a little more.”

“Uh-huh,” we mumble a bit uncertainly.

“Well, there are nine holes to erase the sectors.”

“And nine for flashing the sectors on and off.”

“Andâ€”” Mr. Latz scratched his head. “There’s three more for something else, but darned if I know what they are!”

Leaving the Translator, we proceed into the main control room, directly behind the sign, which is on the front of a Times Square building. One side of the wall is a maze of wires connections, and clicking gadgetsâ€”an electrician’s nightmare if ever there was one! In the middle of the floor is a machine that is even more complicated looking than the Translator, if possible. The roll paper, now perforated with thousands of little holes is passing swiftly over the top of it.

“This is ‘the Brain,'” we are informed. “There’s a French name for it, but we just call it “the Brain.’ It works just like a player piano. The perforated roll passes over an air bar and compressed air impulses are converted into electrical impulses which light the right lights.”

Mr. Latz smiles. “I guest it sounds a little complicated at first,” he points out, “but it’s really pretty simple when you understand it.”

Mr. Latz is unperturbed. “The beauty of it is that there are no limits to the sign’s potentialities. We’ve found that the different colored lights produce new colors when used in combination. And as far as designs, they are limited only by the imagination of the artists. We can handle thirty-six different advertisers, each one with an individual, specially designed display. Think what it means to the small advertiser who could never before afford a ‘spectacular.'”

“We can get a design from an advertiser,” he continues, “and have it on the sign in two hours. And if an advertiser wants to change his design, why, it’s not like tearing down a sign and rebuilding it. It’s just a case of putting in a new strip of perforated paper in the roll.”

We spend a little more time in the control room, gaping in awe at the myriad, multi-colored wires, at the industrious “Brain,” and even going back into the other room to look at the Translator again. We finally come to one definite conclusion, not exactly original, but definite!