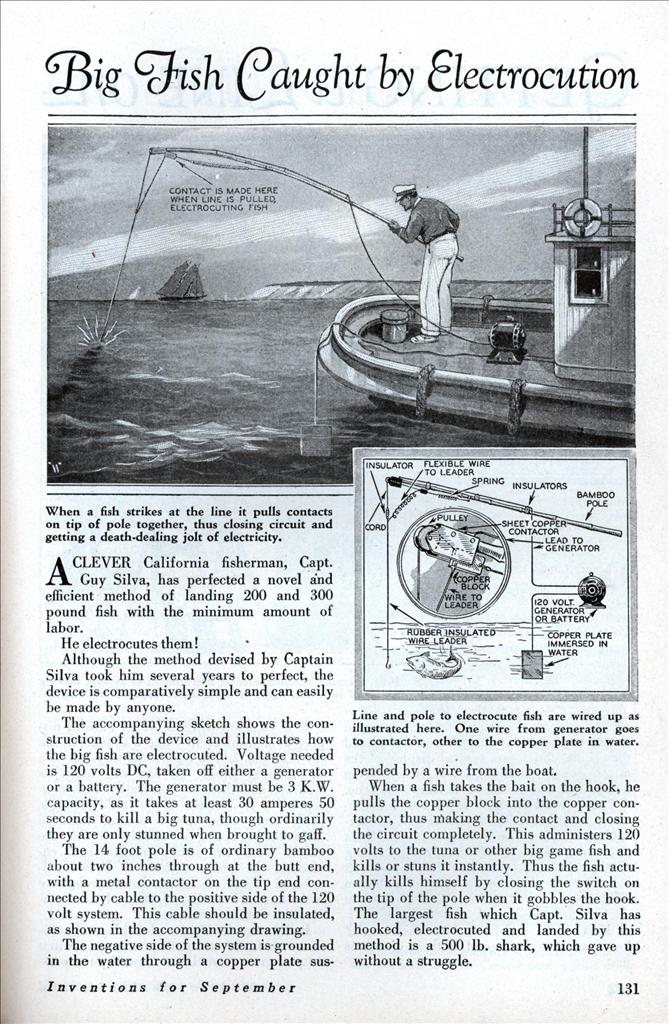 A CLEVER California fisherman, Capt. Guy Silva, has perfected a novel and efficient method of landing 200 and 300 pound fish with the minimum amount of labor.

Although the method devised by Captain Silva took him several years to perfect, the device is comparatively simple and can easily be made by anyone.

The accompanying sketch shows the construction of the device and illustrates how the big fish are electrocuted. Voltage needed is 120 volts DC, taken off either a generator or a battery. The generator must be 3 K.W. capacity, as it takes at least 30 amperes 50 seconds to kill a big tuna, though ordinarily they are only stunned when brought to gaff.

The 14 foot pole is of ordinary bamboo about two inches through at the butt end, with a metal contactor on the tip end connected by cable to the positive side of the 120 volt system. This cable should be insulated, as shown in the accompanying drawing.

The negative side of the system is grounded in the water through a copper plate susspended by a wire from the boat.

When a fish takes the bait on the hook, he pulls the copper block into the copper contactor, thus making the contact and closing the circuit completely. This administers 120 volts to the tuna or other big game fish and kills or stuns it instantly. Thus the fish actually kills himself by closing the switch on the tip of the pole when it gobbles the hook. The largest fish which Capt. Silva has hooked, electrocuted and landed by this method is a 500 lb. shark, which gave up without a struggle.