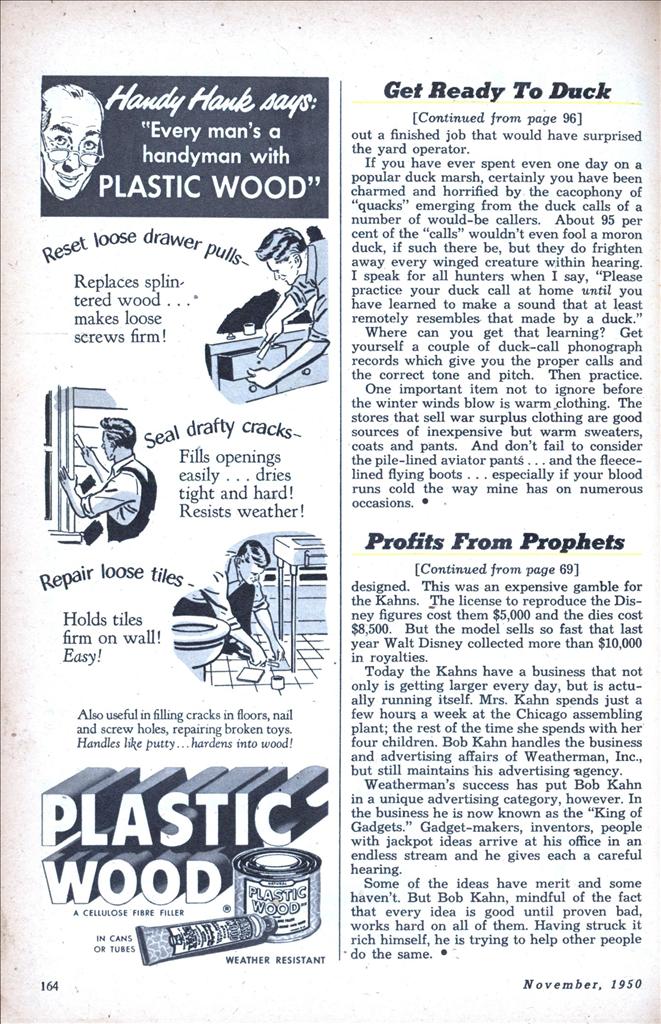 The Kahns took the old Swiss weather house, put it on a modern production line and now collect over % million dollars annually.

TO make a million dollars, or at least to put yourself far out along the road toward your first million, you don’t necessarily have to invent something that nobody ever thought of before. As a matter of fact, you don’t have to invent anything.

You can, like young Mr. and Mrs. Robert Kahn of Highland Park, Illinois, simply resurrect for the modern market an invention that is nearly as old as time.

The Kahns own one of the country’s most unique manufacturing concerns called Weatherman, Inc. Weatherman’s sole product is the old-fashioned Swiss weather house which in the early 1900s was as staple as a household item as the hand-cranked coffee grinder. But by 1944 when the Kahns decided to risk $260 in the hope of selling a few hundred—or a few thousand at the most—the weather house had become just as obsolete as the coffee grinder.

Instead of a few thousand, the Kahns have sold to date more than 3,000,000. The company’s Chicago headquarters mails them out at the rate of 6,000 a week. Last year Weatherman, Inc. grossed $750,000. The Kahns expect the figure to go even higher this year.

Weatherman’s biggest selling item is almost an exact model of the weather house that was sold 50 years ago, except that the tiny figures which stand out of the house to forecast clear or wet weather are made of plastic. The house itself is still made of thin sections of walnut put together with tacks.

Second biggest seller is the Mickey Mouse model, designed by Mrs. Kahn. If the weather is going to be clear, Mickey Mouse emerges from the house. Donald Duck, clad in raincoat and carrying an umbrella, forecasts wet weather.

Like the cuckoo clock, nobody holds a patent on the working principle of the weather house. It operates tike the hygrometer, the instrument commonly used to measure humidity, or moisture in the air. The “motor” is a thin length of catgut —highly sensitive to any change in humidity. When the air becomes damp, the catgut grows longer; it shrinks in dry air. This action moves the little figures in and out of-the house. Since changes in humidity usually indicate changes in weather which occur from eight to 24 hours later, the little figures thus get their forecasting ability.

Toylike as the gadget may seem, it is astonishingly accurate. February, 1948, for instance, was a month that set new records for sudden and violent rain and snowstorms. Weather bureau experts all over the country were caught napping.

But one of the Kahn’s Mickey Mouse models, placed in the window of a Chicago department store, never made a mistake through the whole month!

The gadget’s accuracy, as a matter of fact, was what caused the Kahns to risk going into business. The idea really started with Mrs. Kahn’s hobby of collecting Swiss weather houses. The collection now numbering 40, stands on the shelves of the family library. Some are made of tin and date back to the American revolution. Others are hand carved and go all the way back to the Black Forest in Germany, the world center of weather house manufacturing at one time. .

At dinner one evening, Mrs. Kahn asked her husband, owner of a Chicago advertising agency, “Why wouldn’t it be a good idea to make and sell weather houses?” Then, after a short pause to let the idea register, she added, “Why couldn’t we do it ourselves?”

“The idea,” Bob Kahn confesses today, “didn’t sound very good at first. In two years of advertising in hobby magazines and haunting antique shops, Mrs. Kahn had been able to collect only 38 weather houses. Nobody seemed interested in them. Besides, she was never asked to pay more than ten dollars even for the best hand-carved models. Nobody else even bothered to collect “them.”

Then an idea dawned on Bob Kahn. Weather reports had been banned from radio and newspapers for the duration. “Maybe,” he ventured, “people will buy weather houses at least until the war is over.”

Neither of the Kahns knew the first thing about manufacturing and selling gadgets. Bob’s experience was in straight advertising; his wife had worked as a commercial artist before her marriage. Moreover, in wartime there were some formidable barriers against the starting of a business on something less than a shoestring. Even the smallest manufacturing plants were tied up with war contracts. Raw materials were either scarce or unavailable. But the Kahns were logical, cautious people and the course they followed might be a blueprint for anyone hoping to duplicate their success.

They had a very slim bank account and, as Bob Kahn will readily admit, “a certain amount of luck.” The luck began to show itself when an Iowa toy manufacturer, whose plant hadn’t entirely been converted to war use, advertised in a Chicago newspaper that he had room for limited production of a nonessential item. Bob Kahn answered the ad and Mrs. Kahn got busy designing a weather house that was almost the duplicate of the ones generally sold around 1900. A neighborhood carpenter built the first model.

Their first disappointment came from the manufacturer. He could produce the weather houses; he could produce the roof, sides, flooring and other parts of the house; he could send these to the Kahns who would then attend to painting and assembling them. But the Kahns would have to provide the wood, preferably walnut, and they also would have to assure the manufacturer of two weeks’ work at $100 a week.

What really made the Kahns decide to risk their savings was the answer to their shot-in-the-dark query to the War Assets Administration. They were given the name of a manufacturer who had thousands of rifle stocks rejected by the Army. These, by a fortunate coincidence, were made of walnut. The Kahns signed a contract with the toy manufacturer and together wrote and illustrated an ad which was placed in a Chicago newspaper. It cost the Kahns $60.

The results were truly astonishing. The day after the ad appeared, the Kahns had 400 orders, a few days later 800 and by the end of a week, more than 1500. They tried another ad ten days after the first and got 2000 orders.

Then Bob Kahn invested $6 in postage and sent letters to 200 small radio stations all over the country. The letter offered the stations a salesman’s percentage of whatever number of weather houses they could sell over the air. In three weeks, 18 stations, some of them in cities of 75,000 population, were hawking weather houses over the air. Orders were going to the Iowa plant at the rate of several thousand a week. The weather house then was selling for $1.69.

And then it began to look as though the Kahns’ new business might suddenly choke to death on its own prosperity. They had been doing all the assembling and mailing from their own home, and they were falling far behind in filling orders. Mrs. Kahn solved the crisis with an idea that put Weatherman right back in business—for good. In Chicago she knew of a group of women who were trying to raise money for a neighborhood church. “Why not,” she suggested to the committee chairman, “get a group of women to assemble and paint weather houses on a piecework basis?”

Shortly thereafter 20 women were at work in a loft the Kahns had rented on Chicago’s North Side. The loft was strategically located next door to a post office —again Mrs. Kahn’s idea—and the complicated shipping problem was solved.

The Kahns admit they made some costly mistakes. On several occasions they attempted to sell modernized, streamlined versions of the weather house. One such model was a plastic owl with tiny plastic weather forecasters. Like almost every other attempt to change the weather house radically, it was a dismal failure. Now the Kahns are convinced that people who buy weather houses will buy only the kind their parents and grandparents bought before them.

Children, however, have reacted wonderfully to the Mickey Mouse model which Mrs. Kahn has designed. This was an expensive gamble for the Kahns. The license to reproduce the Disney figures cost them $5,000 and the dies cost $8,500. But the model sells so fast that last year Walt Disney collected more than $10,000 in royalties.

Today the Kahns have a business that not only is getting larger every day, but is actually running itself. Mrs. Kahn spends just a few hours a week at the Chicago assembling plant; the rest of the time she spends with her four children. Bob Kahn handles the business and advertising affairs of Weatherman, Inc., but still maintains his advertising agency.

Weatherman’s success has put Bob Kahn in a unique advertising category, however. In the business he is now known as the “King of Gadgets.” Gadget-makers, inventors, people with jackpot ideas arrive at his office in an endless stream and he gives each a careful hearing.

Some of the ideas have merit and some haven’t. But Bob Kahn, mindful of the fact that every idea is good until proven bad, works hard on all of them. Having struck it rich himself, he is trying to help other people do the same.