Modern Mechanix
Issue: May, 1934
Posted in: Animals For Profit
Tags: frogs
31 Comments on Big Profits in Back Yard FROG Raising (May, 1934) 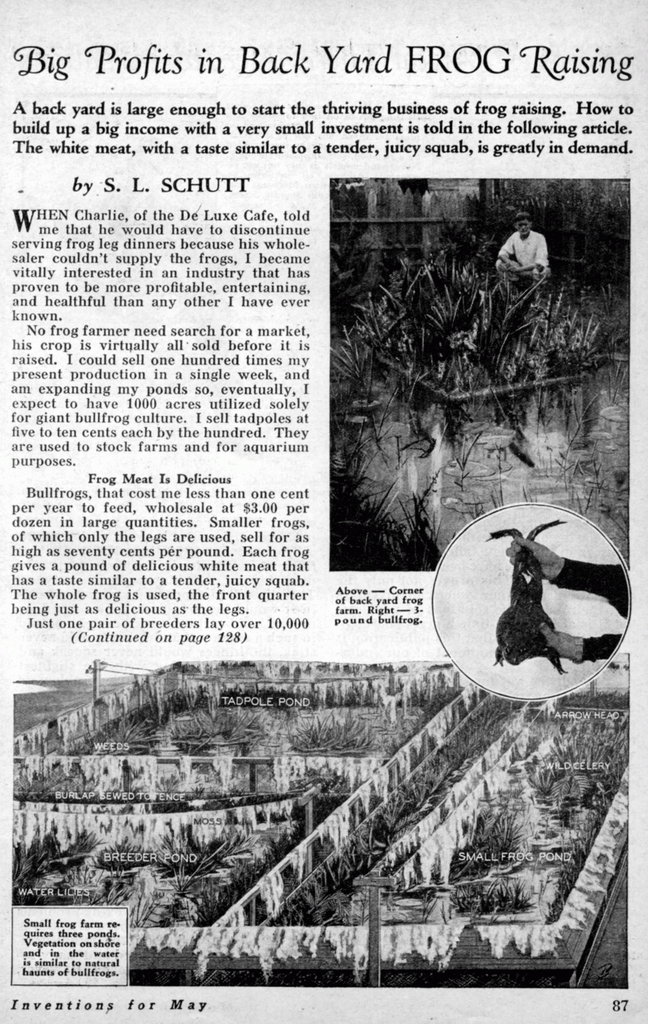 A back yard is large enough to start the thriving business of frog raising. How to build up a big income with a very small investment is told in the following article. The white meat, with a taste similar to a tender, juicy squab, is greatly in demand.

WHEN Charlie, of the De Luxe Cafe, told me that he would have to discontinue serving frog leg dinners because his wholesaler couldn’t supply the frogs, I became vitally interested in an industry that has proven to be more profitable, entertaining, and healthful than any other I have ever known.

No frog farmer need search for a market, his crop is virtually all sold before it is raised. I could sell one hundred times my present production in a single week, and am expanding my ponds so, eventually, I expect to have 1000 acres utilized solely for giant bullfrog culture. I sell tadpoles at five to ten cents each by the hundred. They are used to stock farms and for aquarium purposes.

Bullfrogs, that cost me less than one cent per year to feed, wholesale at $3.00 per dozen in large quantities. Smaller frogs, of which only the legs are used, sell for as high as seventy cents per pound. Each frog gives a pound of delicious white meat that has a taste similar to a tender, juicy squab. The whole frog is used, the front quarter being just as delicious as the legs.

eggs each season; usually over seventy per cent hatch and develop into small frogs.

The advantage of frog farming is the fact that you can start practically anywhere and expand gradually as your profits mount. A vacant city lot, an old orchard or even a back yard can be utilized. Due to the cannibalistic nature of adult frogs, the frog farmer needs three separate ponds, segregating the breeders, tadpoles, and small frogs.

I have found a pond, 20×20 feet, water area, with bank space of six feet on all sides, to be capable of keeping six pairs of breeders. The water depth should not exceed 18 inches except for a pit in the center of the pond where the frogs hibernate in the winter time.

Ordinary one-inch mesh poultry wire four feet high with burlap sewed on the inside to prevent injury and to confine the smaller frogs, is the most sensible fence a frog farmer can use both for breeders and small frogs. Frogs breed from April until August.

At this time, the frog farmer must have a small pond about 10×15 feet planted with arrowheads, water moss and other aquatic plants, in readiness. The pond should be not less than three feet deep to take care of the thousands of tadpoles.

The egg mass must be immediately transferred to the small pond, using a scoop to handle them. In five days, each cluster becomes a wiggling, living mass of tadpoles. Tadpoles are scavengers, eating anything from table scraps to water moss.

In six to eight months, the tadpole begins to develop legs and in a short time is a small frog. At this time, its diet changes from that of a scavenger to being satisfied only with a live or moving food.

The growing pond for the offspring of six pairs should embrace about two acres, including shore line. Water in the two acre tract should cover not more than one-half of the entire area.

I have raised frogs on liver and other domestic meat but I found it impractical to consider this method of feeding on a large scale.

Small bullfrogs can be supplied with an abundance of insects, especially flies, by simply concealing several fish heads in the vegetation along shore. Common crabs, found in most any ditch or stream, and good food for frogs, can be placed directly into the growing pond where they will reproduce in enormous quantities.

When ready for marketing, the frogs are caught at night by blinding them with a search light. When the catcher gets a frog he puts it into a burlap sack with others. They are then put into small pens awaiting the dresser who grabs them by their rear legs and pierces the head with a nail by a downward stroke of the hand. The entrails are removed and the frog is ready for shipment in barrels of cracked ice. .