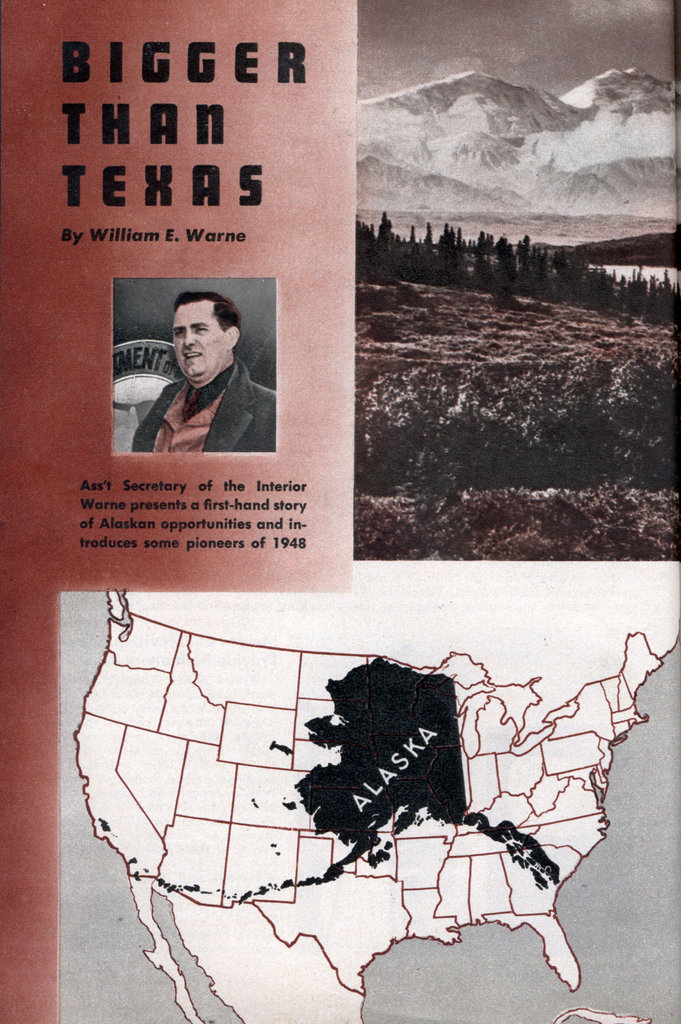 ALASKA, which used to be thought of as a land of perpetual ice and snow, has suddenly assumed great importance to the United States because it is the crossroads of the air age.

Intercontinental routes, via the Great Circle and over the top of the Pole, are already using Alaska as the hub of their wheel. This giant “hub” covers 586,400 square miles which makes it considerably bigger than Texas which has a total area of 267,339 square miles.

With eyes focused sharply on Alaska for the first time since the Gold Rush of 1897, the American people have suddenly discovered that their former appraisals of this vast, beautiful, empty land were wrong. It is not a land of perpetual ice and snow, but a land of opportunity, albeit one that challenges even rugged men in the process of making a place for themselves. Strangely enough, the great glaciers and the tremendous winter snows that gave Alaska its reputation are confined largely to the mountains and the rough coastal areas of the south. The vast heartland of Alaska, stretching from the Kenai Peninsula up Cook Inlet to Anchorage, through the Susitna, Matanuska and other river valleys, down the Nenana and Tanana Valleys to Fairbanks and to the Yukon and out the Alaska Highway to Tok Junction, has many areas of mild summers with long golden days and fair growing seasons for crops.

Alaska is a varied land. Superimpose a map of Alaska drawn to the same scale on a map of the 48 United States and it extends from South Carolina to southern California and from the Mexican border to northern Minnesota. In land area alone, it is one fifth the size of the 48 states. It is readily seen that such a great area spread in peninsulas and islands over so vast a part of the world would not be all alike. Southeastern Alaska is a land of heavy rainfall, great beauty, fiords cutting into high mountains near the sea, entrancing spruce-covered hills and slopes, quiet, protected waters among the islands and the shoreland, glaciers that come down to the sea, a land of fishing and hunting where boats substitute entirely for roads, and the airplane is the only means of quick transportation.

Central Alaska, the heartland, is not so very different from the northern plains states. Its climate is colder and it is cut here and there by high mountains. Otherwise, much of it resembles northern Michigan and Minnesota. Here Alaska’s only railroad serves its biggest cities—Anchorage and Fairbanks, and the Alaska Highway comes up from the south through Canada to join the territory’s only other important road, the Richardson Highway, near Fairbanks where the railroad meets the great rivers of the north and boats begin to ply the Tanana and Yukon Rivers toward the Arctic. The great airdromes of the future will be located in the heartland, and here most of the farming opportunities will be found.

The Aleutian Islands, of less than fond memory on the part of many a GI, are different again. They are isolated, stormbound, rough, and at times forbidding. Their climate is not extreme, but the grasses that grow lush on their slopes are not pastured because there is no means to get the wool, hides and meat that the livestock would produce out to market.

Bristol Bay, Kuskokwim Bay, Norton Sound and the Kotzebue Sound on the western face of Alaska are surrounded by low delta lands. Bristol Bay is famous for its salmon and other fisheries, but except for the short fishing season, the lands that front on the Bering Sea have little activity. The Eskimos trap furs and fish here, and trade with them is important. Mines are in operation in some of the hills for such rare metals as tin, platinum and gold. Other minerals found in the region include iron, nickel, zinc, silver, tin, lead and chromium.

The last region of Alaska is the Arctic slope and Colville River Basin. It is low, bleak and little used, although traces of oil have sent the Navy scurrying over a vast region, prospecting on a reserve set up for it.

Alaska’s greatest need is population and the biggest opportunity for people who want to go there will be found in connection with businesses and activities that will contribute to the support and comfort of many people in the territory. There are problems to be overcome, transportation facilities need to be increased and improved, good housing is required, much exploration for minerals and testing of soils for agricultural needs to precede the final stage of development. These problems are being studied and worked on by local, territorial and federal officials. They will be solved in time.

Meantime, many sturdy individuals have pitted themselves against this hard land. The population of 75,000 before the war now exceeds 90,-000, and Anchorage is among the fastest growing cities in the world.

Here are some thumbnail case histories: Robert Thompson went to Alaska in 1940 as an officer in “Castner’s Cut-Throats” What he saw wasn’t so different from his home in Moccasin, Mont. After the war, he and Aden Winkelman, his sergeant in Army days, built themselves Anchorage’s most modern restaurant. It has been doing good business since the spring of 1947.

Dennis Fenno went to Alaska first as a fisherman when a young man and spent a summer or two on Bristol Bay. During the war, he served as a bomber pilot in Italy, but went back to Dillingham, a fishing village, and bought a half interest in the Dillingham Air Service—assets, one plane. He and two other former Army pilots now have three planes operating between Anchorage and Dillingham, carrying freight and passengers. There are many such stories of bush-line flying, because the airline is doing the job in Alaska that the covered wagon, the pony express and the early railroad did in opening up the West. Before air travel was introduced in Alaska, the interior was closed to all except the hardiest adventurers who braved sub-zero weather and starvation in their search for gold. Dog teams were the principal means of transportation.

In 1945, Vere Savage bought a small cannery at Ninilchik. A series of small disasters put him $17,000 in debt. He told some young veterans at Anchorage of his trouble, including L. T. Gardner, whose home is Grants Pass, Ore.; Jack Schriber, formerly of Milwaukee; Peter Harris, Alaska-born; Walter Keck of Carter, S. D.; Ralph Mitchel of Craig-mont, Idaho; Mike Rogers of Scarsdale, N. Y.; and Bill Fitzgerald of Kalamazoo, Mich. They formed a partnership, moved the cannery to Kasilof, rebuilt it, and late in the season of 1947 commenced packing “Polar Sea Foods.” It looked as though their operation would be a success the first year.

Dan Lappala went to Alaska to help build Army facilities during the war and then joined the Seabees. He stayed at Anchorage after receiving his discharge and established a nursery. He bought stock from the Midwest and, though he says the going has been hard, is now receiving orders for Alaska birch and other products to export to “outside” buyers. (Alaskans refer to other parts of the U.S. as “outside.”) Lappala says that he is in business to stay.

Jack Conright served two years at Fort Richardson near Anchorage. When he was discharged, he went into the furniture business and persuaded his brother Curly, an experienced furniture maker, to come from Tacoma, Wash. He now makes furniture in the basement of his store and has found a profita- ble sideline in making seats, cushions and covers for the many jeeps which swarm Alaska.

E. J. Fortier took over the Weekly Times in Anchorage, renamed it The Forty-Ninth Star to emphasize the drive for statehood, and is building up circulation in central Alaska.

In addition, men are finding their livelihood in teaching and the other professions, in flying tourists to fishing lakes, in raising chickens, operating dairies, and scores of other jobs including farming.

Homesteading is occupying increasing numbers. Carving a farm out of the Alaskan woods is not child’s play, but many are managing to win through. There are now 450 successful farms in the Matanuska Valley where the government project that won much comment a dozen years ago established 200 farms. This is one of the best farming areas. There are still some lands available for development there.

In summary, opportunities in Alaska are as varied as the land itself, but all of them involve hard work under difficult conditions because Alaska is not an easy land. The people who are required to populate it, however, will be found. Alaska, which has been a U.S. possession since 1867, is on its way to becoming a state and its great growth is immediately before it.