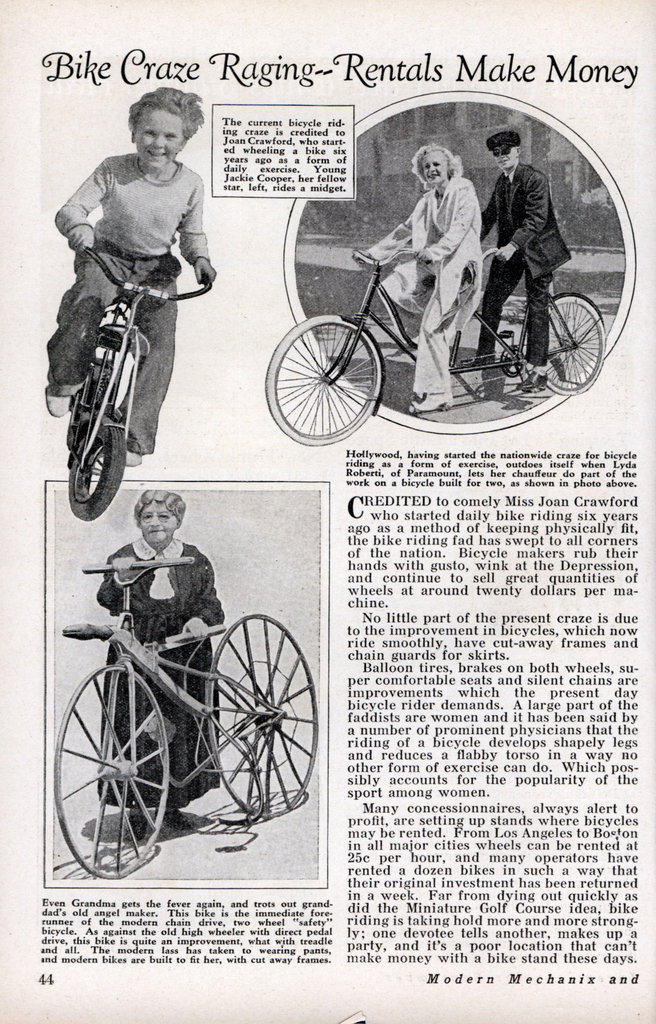 CREDITED to comely Miss Joan Crawford who started daily bike riding six years ago as a method of keeping physically fit, the bike riding fad has swept to all corners of the nation. Bicycle makers rub their hands with gusto, wink at the Depression, and continue to sell great quantities of wheels at around twenty dollars per machine.

No little part of the present craze is due to the improvement in bicycles, which now ride smoothly, have cut-away frames and chain guards for skirts.

Balloon tires, brakes on both wheels, super comfortable seats and silent chains are improvements which the present day bicycle rider demands. A large part of the faddists are women and it has been said by a number of prominent physicians that the riding of a bicycle develops shapely legs and reduces a flabby torso in a way no other form of exercise can do. Which possibly accounts for the popularity of the sport among women.

Many concessionnaires, always alert to profit, are setting up stands where bicycles may be rented. From Los Angeles to Boston in all major cities wheels can be rented at 25c per hour, and many operators have rented a dozen bikes in such a way that their original investment has been returned in a week. Far from dying out quickly as did the Miniature Golf Course idea, bike riding is taking hold more and more strongly; one devotee tells another, makes up a party, and it’s a poor location that can’t make money with a bike stand these days.