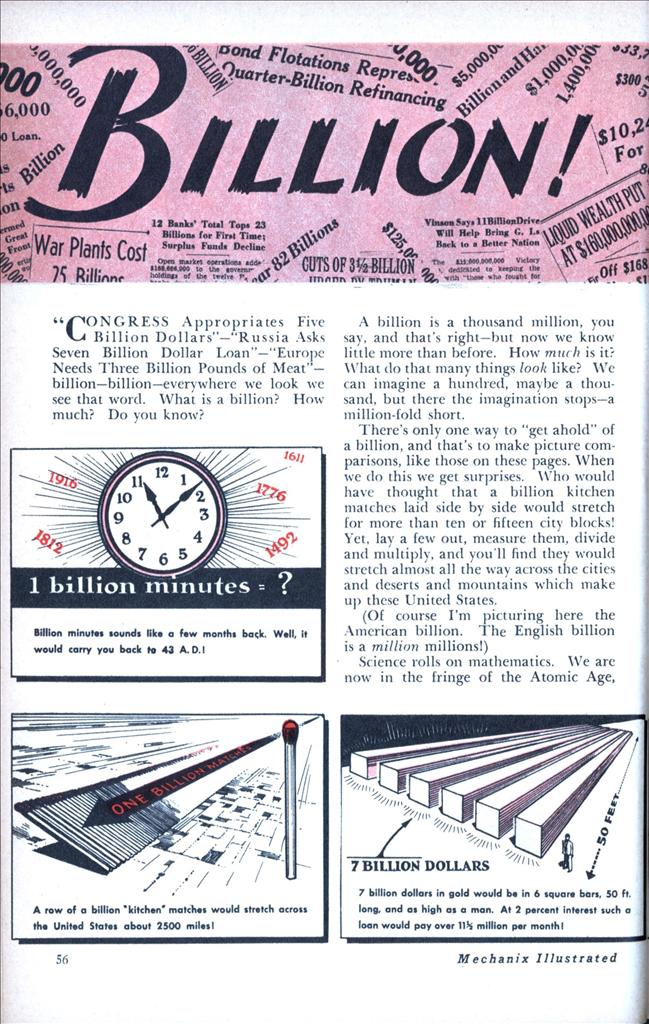 Let’s take a trip Inside the word “billion”—that word everbody uses but nobody really comprehends. Get set for an eyeful of surprises!

“CONGRESS Appropriates Five Billion Dollars”—”Russia Asks Seven Billion Dollar Loan”—”Europe Needs Three Billion Pounds of Meat”— billion—billion—everywhere we look we see that word. What is a billion? How much? Do you know?

A billion is a thousand million, you say, and that’s right—but now we know little more than before. How much is it? What do that many things look like? We can imagine a hundred, maybe a thousand, but there the imagination stops—a million-fold short.

There’s only one way to “get ahold” of a billion, and that’s to make picture comparisons, like those on these pages. When we do this we get surprises. Who would have thought that a billion kitchen matches laid side by side would stretch for more than ten or fifteen city blocks! Yet, lay a few out, measure them, divide and multiply, and you’ll find they would stretch almost all the way across the cities and deserts and mountains which make up these United States.

(Of course I’m picturing here the American billion. The English billion is a million millions!) Science rolls on mathematics. We are now in the fringe of the Atomic Age, and our physical unit has become the atom—that particle which is the very substance of our bodies, our world, our whole future. Atom diameters range from four to ten billionths of an inch. The proton, the particle of positive electricity, has a diameter of only four hundred thousand billionths of an inch. How can we comprehend the atom without a handy size-visualizing scale!

Look at each picture. Study every one carefully, memorize a few. Then you’ll begin to get some idea of how much a billion is.

You’ll begin to. I hope.