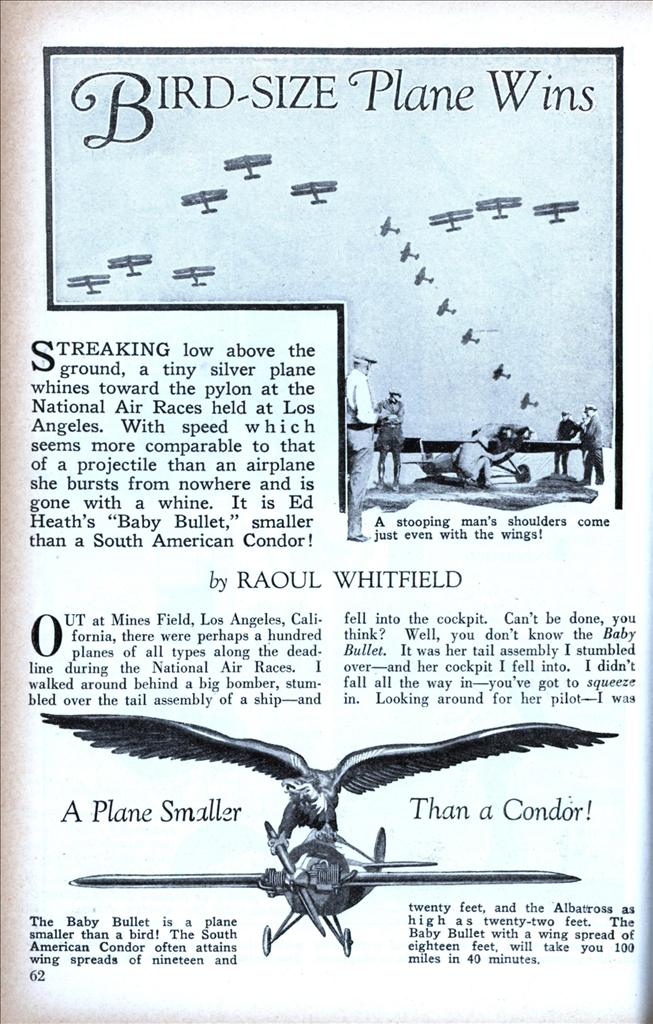 STREAKING low above the ground, a tiny silver plane whines toward the pylon at the National Air Races held at Los Angeles. With speed which seems more comparable to that of a projectile than an airplane she bursts from nowhere and is gone with a whine. It is Ed Heath’s “Baby Bullet,” smaller than a South American Condor!

OUT at Mines Field, Los Angeles, California, there were perhaps a hundred planes of all types along the deadline during the National Air Races. I walked around behind a big bomber, stumbled over the tail assembly of a ship—and fell into the cockpit. Can’t be done, you think? Well, you don’t know the Baby Bullet. It was her tail assembly I stumbled over—and her cockpit I fell into. I didn’t fall all the way in—you’ve got to squeeze in. Looking around for her pilot—I was thinking of apologies—I watched a rather short individual calmly walk up, lift the tail assembly, and start to pull the plane along after him. He sort of strolled along with her. She certainly is a convenient crate to have around.

The plane has a wing spread of but eighteen feet; she’s only thirteen feet from propeller tip to the trailing edge of her rudder fin. She’s a monoplane, and with her two-cylinder engine can develop a speed of one hundred and fifty miles an hour. I neglected to get her weight, but it isn’t much.

The tiny plane was designed, built and flown by E. J. Heath, of Chicago. She’s the sort of a crate you can easily keep in a garage—a two-car garage—by knocking out the wood between the two doors. She looks like a trim ship—and she is. She won the Fifty Mile Free-For-All small engine race at the field. And she did it throttled down. Beat five other planes.

The photo on page 62 shows the baby ship about thirty seconds before the start of the race around the five-mile course. Her pilot is in the cockpit—even if you can’t see him—and her prop is whirling. She’s in the number one position, the first to be waved off. Note that her wing surfaces barely reach the average man’s knees. The kneeling gentleman is about to kick the board used as a wheel chuck out of the way.

The checkered flag dropped, and this crate got off. In a hurry. Her pilot didn’t hold her on the ground long. He didn’t have to do that. She was almost lost from sight, because of her size, getting around the first pylon turn. She made the first two or three laps on the triangular course at about one hundred and forty miles an hour. But she was catching up on the other ships so fast that her pilot throttled down. He didn’t want to lap them.

She came down in a nice landing, after the finish. Her pilot picked up the tail assembly and trundled her over to the deadline. First prize was two thousand, five hundred dollars—and he was grinning. He’d probably used a couple of quarts of gas and a pint of oil in copping the prize. The little crate is rightly named—she’s a baby bullet. It’s a real thrill, watching this tiniest of airplanes do its stuff.