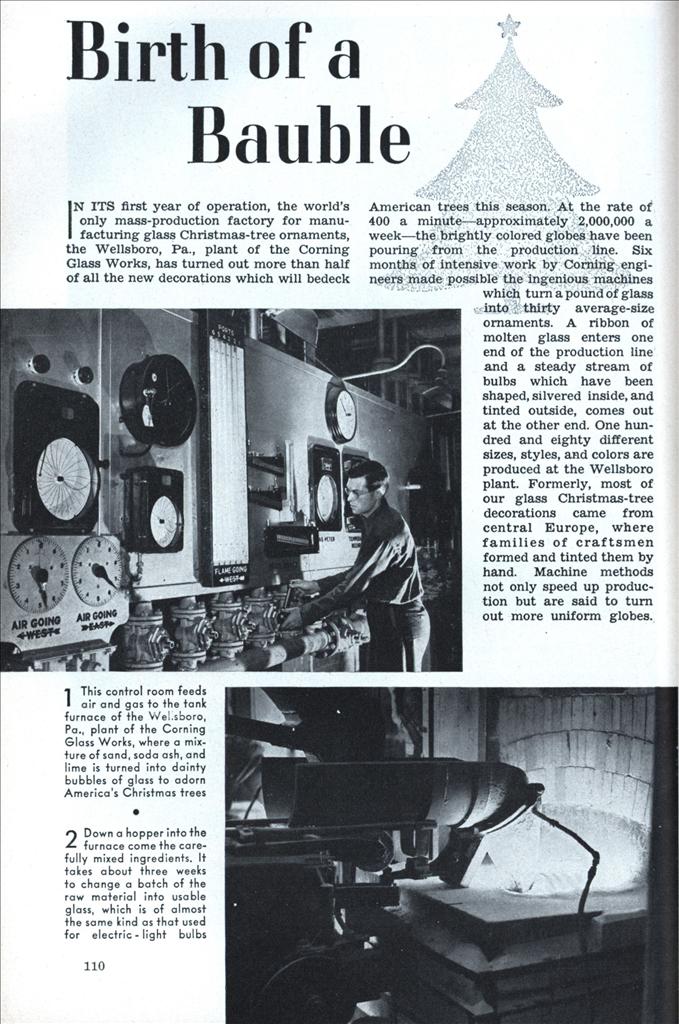 Birth of a Bauble

IN ITS first year of operation, the world’s only mass-production factory for manufacturing glass Christmas-tree ornaments, the Wellsboro, Pa., plant of the Corning Glass Works, has turned out more than half of all the new decorations which will bedeck American trees this season. At the rate of 400 a minuteâ€”approximately 2,000,000 a weekâ€”the brightly colored globes have been pouring from the production line. Six months of intensive work by Corning engineers made possible the ingenious machines which turn a pound of glass into thirty average-size ornaments. A ribbon of molten glass enters one end of the production line and a steady stream of bulbs which have been shaped, silvered inside, and tinted outside, comes out at the other end. One hundred and eighty different sizes, styles, and colors are produced at the Wellsboro plant. Formerly, most of our glass Christmas-tree decorations came from central Europe, where families of craftsmen formed and tinted them by hand. Machine methods not only speed up production but are said to turn out more uniform globes.

1. This control room feeds air and gas to the tank furnace of the Wellsboro, Pa., plant of the Corning Glass Works, where a mixture of sand, soda ash, and lime is turned into dainty bubbles of glass to adorn America’s Christmas trees.

2. Down a hopper into the furnace come the carefully mixed ingredients. It takes about three weeks to change a batch of the raw material into usable glass, which is of almost the same kind as that used for electric – light bulbs.

3. From time to time, a sample of glass is taken out of the furnace for testing. Just as an expert candy maker con tell when candy is ready to take from the stove, so a skilled glass worker can judge the quality of his gloss by eye. The viscosity shows when the glass is ready for use.

4. New material is added little by little until about thirty-five tons of glass has been prepared. Guarded by steel shields from the 2,800-degree heat, a workman pushes the finely ground mixture onto the molten mass.

5. Shielding his eyes from the blinding glare of the flames with a window of dark glass, a workman peers through an opening in the furnace, whose heat reproduces in miniature the conditions on the sun.

6. Streaming from the furnace, molten glass enters the “ribbon machine,” which carries it along between rollers like a moving ribbon. This machine is also used in the manufacture of electric-light bulbs.

7. As the ribbon goes along horizontally, clinging to the underside of a moving belt, puffs of compressed air blow through it from above to form bubbles that grow in size until each is plucked off between the halves of a mold moving up to meet it.

8. Clamped inside the mold, the bubble of glass is blown up to the desired shape. In the picture below, one of the molds has been opened to show how the glass sphere is formed with its neck attached. Molds are changed to make ornaments of any type.

9. Asbestos “hands” on this rotary transfer mechanism take the hot, shaped bulbs from the molds of the ribbon machine. Then, turning from a horizontal to a vertical position, they lay them on a belt …

10. … which carries them to the “lehr” for cooling. It takes the globes about twenty minutes to pass through this forty-foot machine, where the temperature is lowered gradually to prevent strains.

11. Emerging from the lehr, the bulbs are carried by a moving belt past girls who remove broken pieces. At this stage, the clear glass spheres resemble soap bubbles floating on a stream of water. A pound of glass makes thirty average-size globes.

12. These girl inspectors are examining the globes for imperfections. Modern machine methods used at the Corning plant not only permit greater speed of production, but also turn out stronger and much more uniform ornaments.

13. Picking up bulbs at random from the moving belt, this inspector holds them against the polariscope, in which polarized light reveals any strains created in cooling.

14. Another type of polarized-light testing instrument is seen below. When a bulb is held up in front of the lighted screen, telltale iridescent patterns show lines of stress or tension which might make it break easily.

15. Here girls are putting the bulbs on racks in a machine for silvering and coloring. First, chemicals are sprayed up through the necks to give a mirrorlike surface inside. . .

16. … then the racks pass through the dye vats where baths of brilliant color give them the outer tints of red, blue, green, gold, and silver that add sparkle to trees on Christmas Day.

17. After, the dye has been dried quickly by heat, the necks are cut off by an automatic machine. Occasionally, however, one of the bulbs gets by the machine. It is the job of this girl to catch such strays and cut off their necks by hand on a Carborundum wheel.

18. At the end of the long production line, the globes are sorted and broken ones are removed. Now they are packed in partitioned cardboard boxes.

19. Enough ornaments to cover a whole forest of Christmas trees are contained in these cartons stacked in a warehouse awaiting shipment. Two million are turned out every week.