Birthplace of the Transistor (Jul, 1953) 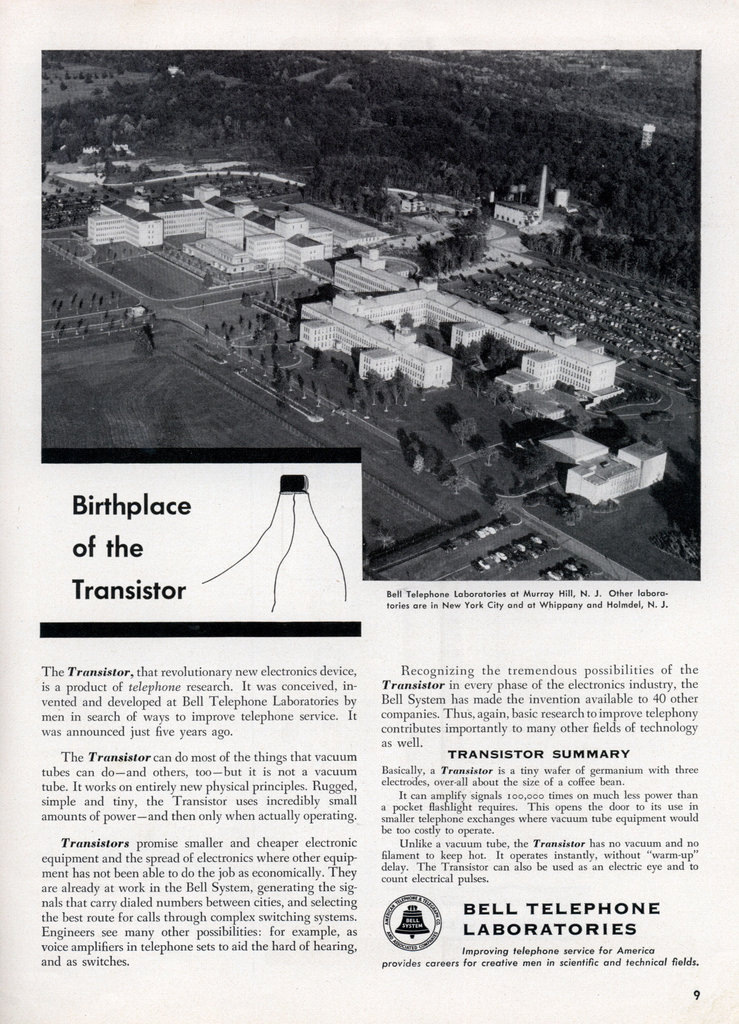 Birthplace of the Transistor

The Transistor, that revolutionary new electronics device, is a product of telephone research. It was conceived, invented and developed at Bell Telephone Laboratories by men in search of ways to improve telephone service. It was announced just five years ago.

The Transistor can do most of the things that vacuum tubes can do—and others, too —but it is not a vacuum tube. It works on entirely new physical principles. Rugged, simple and tiny, the Transistor uses incredibly small amounts of power —and then only when actually operating.

Transistors promise smaller and cheaper electronic equipment and the spread of electronics where other equipment has not been able to do the job as economically. They are already at work in the Bell System, generating the signals that carry dialed numbers between cities, and selecting the best route for calls through complex switching systems. Engineers see many other possibilities: for example, as voice amplifiers in telephone sets to aid the hard of hearing, and as switches.

Recognizing the tremendous possibilities of the Transistor in every phase of the electronics industry, the Bell System has made the invention available to 40 other companies. Thus, again, basic research to improve telephony contributes importantly to many other fields of technology as well.

Basically, a Transistor is a tiny wafer of germanium with three electrodes, over-all about the size of a coffee bean.

It can amplify signals 100,000 times on much less power than a pocket flashlight requires. This opens the door to its use in smaller telephone exchanges where vacuum tube equipment would be too costly to operate.

Unlike a vacuum tube, the Transistor has no vacuum and no filament to keep hot. It operates instantly, without “warm-up” delay. The Transistor can also be used as an electric eye and to count electrical pulses.