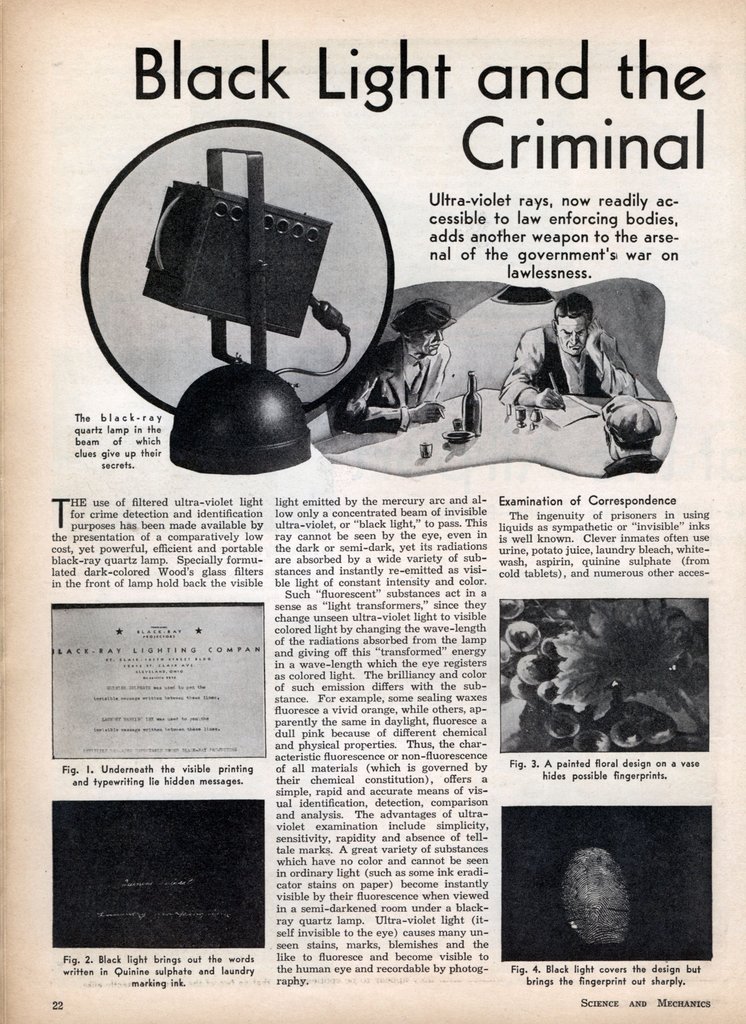 Black Light and the Criminal

Ultra-violet rays, now readily accessible to law enforcing bodies, adds another weapon to the arsenal of the government’s war on lawlessness.

THE use of filtered ultra-violet light for crime detection and identification purposes has been made available by the presentation of a comparatively low cost, yet powerful, efficient and portable black-ray quartz lamp. Specially formulated dark-colored Wood’s glass filters in the front of lamp hold back the visible light emitted by the mercury arc and allow only a concentrated beam of invisible ultra-violet, or “black light,” to pass. This ray cannot be seen by the eye, even in the dark or semi-dark, yet its radiations are absorbed by a wide variety of substances and instantly re-emitted as visible light of constant intensity and color.

Such “fluorescent” substances act in a sense as “light transformers,” since they change unseen ultra-violet light to visible colored light by changing the wave-length of the radiations absorbed from the lamp and giving off this “transformed” energy in a wave-length which the eye registers as colored light. The brilliancy and color of such emission differs with the substance. For example, some sealing waxes fluoresce a vivid orange, while others, apparently the same in daylight, fluoresce a dull pink because of different chemical and physical properties. Thus, the characteristic fluorescence or non-fluorescence of all materials (which is governed by their chemical constitution), offers a simple, rapid and accurate means of visual identification, detection, comparison and analysis. The advantages of ultraviolet examination include simplicity, sensitivity, rapidity and absence of telltale marks. A great variety of substances which have no color and cannot be seen in ordinary light (such as some ink eradi-cator stains on paper) become instantly visible by their fluorescence when viewed in a semi-darkened room under a black-ray quartz lamp. Ultra-violet light (itself invisible to the eye) causes many unseen stains, marks, blemishes and the like to fluoresce and become visible to the human eye and recordable by photography.

The ingenuity of prisoners in using liquids as sympathetic or “invisible” inks is well known. Clever inmates often use urine, potato juice, laundry bleach, whitewash, aspirin, quinine sulphate (from cold tablets), and numerous other accessible solutions in writing a secret hidden message between the lines of an innocent message penned in ordinary writing inks. If correspondence to and from prisoners is examined under a black-ray quartz lamp, such invisible messages usually become readable. The heat of a match will cause rapid scorching of most invisible messages and will thus render them visible, yet no letter or envelope so tested can be passed on, for the recipient would naturally be put on his guard by the test marks. If ultra-violet light is used, no damages or alterations occur to indicate examination.

Figure 1 was taken in ordinary electric light to show notes which appear to be perfectly innocent. This unretouched photo does not reveal concealed messages between the lines. In these cases, laundry marking ink and quinine sulphate were used.

Figure 2 shows the identical slip of paper as it appears in the beam of a black -ray quartz lamp in a darkened room. The paper is dark, but due to the fluorescence of the quinine and laundry ink, secret messages are readable. Since the lamp leaves no trace of examination, letters containing such secret writing may be forwarded and any resulting plot “nipped in the bud.”

The widespread acceptance of a new system of invisible laundry marking should be of interest to criminal identification experts. This system, rigidly controlled by patents, entails the marking of laundry with invisible, indelible, fluorescent inks which can be seen only when the marked fabrics are viewed in ultraviolet light. Laundries now stamp all fabrics in the most prominent positions with figures which cannot be found in daylight or electric light in spite of the fact that they are 20 times the size of old-fashioned marks. Any uninformed operative examining garments marked by one of the laundries using this system would assume that it was unmarked. Merely passing the garment under a black-ray quartz lamp will cause the huge, indelible mark to become visible, and will reveal what laundry marked the garment. Every laundry licensed to use this system is given a special mark insignia which is always stamped before or after the numerical laundry mark on the articles laundered. Each laundry has a different “trademark” which cannot be changed. Since these marks last for the life of the garment, they form a positive means of locating the exact laundries in which the garment has been laundered. Subsequent check of the laundry records will reveal the name given by the party leaving the garment and the date he left the laundry.

A simple, rapid and highly successful technique for locating and photographing fingerprints, regardless of the color or pattern of the surface has been developed. Because of the natural fluorescence of oils and fatty materials normally contained in fingerprint impressions, quartz lamps are useful in detecting fingerprints. The necessity of dusting large areas is thus eliminated.

Figure 3 was taken in electric light and portrays a small magnified section of a round vase on which a highly patterned design in many different colors had been painted. The fingerprint was located on this section by means of its natural fluorescence and it was then dusted with the special fluorescent powder, following the technique above described. Figure 4 is the photo taken of the dusted print in ultra-violet light. It is unretouched, yet every detail of the print is clearly shown in white against a black background.

Documentary examinations under black-ray quartz lamps are of importance to the investigator because of the assistance lent in the detection of eradications, erasures, alterations, over-printing, artificial watermarks, etc. Practically all chemical eradicators leave a mark which is visible in ultra-violet light. They usually appear as blue, bluish-white, or yellow fluorescent smears, although some appear as dark smudges.

Figure 5, taken by electric light, shows a promissory note on which no evidence of alteration is detectable. This note has been examined by a number of experts and they have all pronounced it original in all details, or have given incorrect opinions as to what might be out of order. Figure 6 taken in the ultra-violet beam, shows the alteration.

Ultra-violet light is useful to investigators and banks for the detection of forged bank notes. If a note under suspicion is compared directly with a note known to be genuine, the differences in the dye stuffs used in the printing inks is plainly discernible. In most cases the fluorescence of the fibers of two different papers vary considerably due to differences in the degree of cook of the pulp, washing of the pulp, origin of the paper, etc. The watermark test described below is usually a final and conclusive ultraviolet test. Spurious watermarks made by stamping the paper with a die of wax or other oily substance to give the appearance of transparency, are often detected by examination in ultra-violet light if the watermark under suspicion is swabbed with a cotton pad soaked in ether. Although the oily materials may not fluoresce in the solid state, their ether solution leaves a vividly fluorescent smear. Naturally, genuine watermarks will give no such reaction.

Safety papers, in which a small percentage of the total fibers are fluorescent have been developed. Fraudulent imitation of this paper is a difficult matter.

Fluorescent safety papers which have been coated or impregnated with fluorescent materials are used for checks and securities. Although erasures may be made by skilled criminals, the most expert workmanship will usually appear as a dark smudge in ultra-violet light.

Old bloodstains are often detectable on fabrics even though these may have been washed until they appear to be spotlessly clean in ordinary light. Several positive fluorescence methods for proving that such stains are blood stains have been evolved. When concentrated sulphuric acid is added to blood, a vivid orange-red fluorescence appears under ultra-violet light. This fluorescence is characteristic and highly important in distinguishing bloodstains from rust, for example.

â€¢ Readers desiring a list of the manufacturers or dealers whose products are described in this issue may secure a special bulletin by sending a 3c stamp.