This is a pretty amazing article. It’s a concise summary of the big bang theory published only 3 years after Edwin Hubble made his famous observations about the redshifts of distant galaxies. Yet it’s pretty much identical to one you’d see today. Only a few details like the size of the initial “atom” and the age of the universe seem off. Keep in mind it took another 35 years or so before the scientific community came to accept that the big bang really happened. 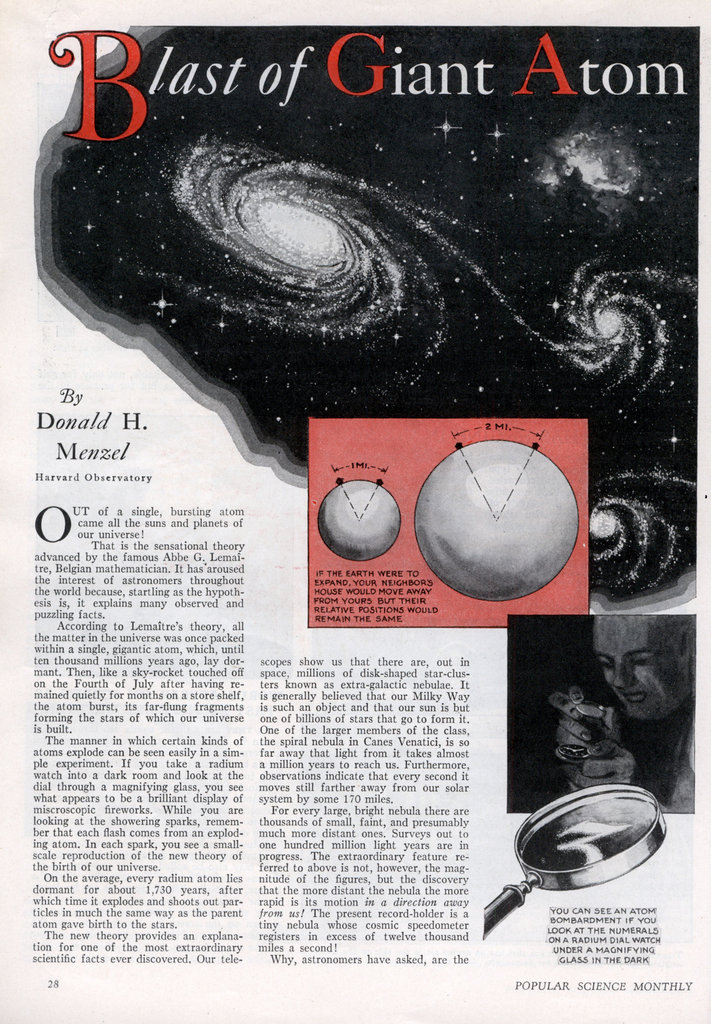 OUT of a single, bursting atom came all the suns and planets of our universe!

That is the sensational theory advanced by the famous Abbe G. Lemaitre, Belgian mathematician. It has aroused the interest of astronomers throughout the world because, startling as the hypothesis is, it explains many observed and puzzling facts.

According to Lemaitre’s theory, all the matter in the universe was once packed within a single, gigantic atom, which, until ten thousand millions years ago, lay dormant. Then, like a sky-rocket touched off on the Fourth of July after having remained quietly for months on a store shelf, the atom burst, its far-flung fragments forming the stars of which our universe is built.

The manner in which certain kinds of atoms explode can be seen easily in a simple experiment. If you take a radium watch into a dark room and look at the dial through a magnifying glass, you see what appears to be a brilliant display of miscroscopic fireworks. While you are looking at the showering sparks, remember that each flash comes from an exploding atom. In each spark, you see a small-scale reproduction of the new theory of the birth of our universe.

On the average, every radium atom lies dormant for about 1,730 years, after which time it explodes and shoots out particles in much the same way as the parent atom gave birth to the stars.

The new theory provides an explanation for one of the most extraordinary scientific facts ever discovered. Our telescopes show us that there are, out in space, millions of disk-shaped star-clusters known as extra-galactic nebulae. It is generally believed that our Milky Way is such an object and that our sun is but one of billions of stars that go to form it. One of the larger members of the class, the spiral nebula in Canes Venatici, is so far away that light from it takes almost a million years to reach us. Furthermore, observations indicate that every second it moves still farther away from our solar system by some 170 miles.

For every large, bright nebula there are thousands of small, faint, and presumably much more distant ones. Surveys out to one hundred million light years are in progress. The extraordinary feature referred to above is not, however, the magnitude of the figures, but the discovery that the more distant the nebula the more rapid is its motion in a direction away from us! The present record-holder is a tiny nebula whose cosmic speedometer registers in excess of twelve thousand miles a second!

Why, astronomers have asked, are the more distant objects moving faster? Why does the motion always seem to be away from us? If the motion is one of simple expansion, why should we find ourselves so nearly at the center, looking outward? Exponents of the theory of relativity have been inclined to accept the view that the universe is actually expanding. But the apparent central position of our earth, they believe, is an illusion, that may be illustrated by an analogy. Suppose that, during the night, the earth were to double in size, while everything upon its surface were to remain unchanged. In the morning you would awake to find that your neighbor, who previously lived only fifty feet away, was now one hundred feet away. The Smiths, who lived a mile away, would be two miles away. In every direction, there would be an apparent withdrawal, which would be greater for more distant objects. Everybody would be similarly affected and each would believe himself to be the center away from which the other objects had moved.

The case of the universe is analogous, except that the expansion, being of a three-dimensional volume, cannot be visualized. The phenomena are, however, comparable. The nebulae are not running away from us. Their recession is due to expansion of space. This may, perhaps, seem to be quibbling over terms, since it amounts to the same thing in the end. Nevertheless, the distinction is worth keeping. According to the relativity theory, there is a difference between the running away of the nebulae and expansion of the medium in which they are imbedded.

The hypothesis, however, is not without difficulties. The expansion is so rapid that, going back only ten thousand million years, we find the stars more closely packed than automobiles are in Times Square in New York City at the theater hour. Ten thousand million years may seem too long to cause us to worry about parking places for prehistoric stars. Nevertheless, geologists tell us that the earth is at least a billion years old and we have come to regard this period as but a minute fraction of the entire lifetime of the universe. Hence the difficulty!

In a sense, this belief is a heritage from the nineteenth century. The great French astronomer, Pierre de Laplace, suggested that the sun and planets might have condensed from a fine mist much as droplets of water condense in a rain cloud. Although this theory, the well-known nebular hypothesis, has long since been abandoned so far as the origin of the earth and solar system is concerned, astronomers have been inclined to accept it in explaining the birth of stars.

One intuitively feels that the self building up of stars from cosmic dust is a process that would take an infinitely greater time to complete than the mere formation of planetary systemsâ€”a feeling that precise calculation confirms. If the expanding-universe conception is correct, we must revise our ideas about the birth of stars. Slow evolution is out of the question. A fireworks theory is exactly what we need!

DR. LAMAITRE’S hypothesis does away with the old query as to the state of affairs before the beginning of things. Going back to the parent atom we may inquire about what happened before the cosmic explosion took place. The answer is: “Nothing.” Computation shows that space would have closed up around the massive atom and, certainly, nothing can happen where there is no room for it to happen. Time has no meaning in a perfectly static world. The age of the universe is to be reckoned from that prehistoric Fourth of July, when space came into existence. Since then, space has been continually expanding before the onrushing stars, sweeping the way for them, forming a sort of motorcycle squadron to make room for the star-procession to follow.

Lemaitre’s theory does not tell us how our earth was formed â€”whether the planets were born at the time of the original explosion or whether they came into existence at some later date. If his hypothesis is true, however, it is more attractive to believe the former, speculative as it may be. At least this assumption will provide consolation for those who have lamented the failure of the generally accepted theory to provide for more than a handful of possibly habitable worlds.

SO MUCH for the present. What of the future? Einstein and the noted Dutch astronomer, Willem de Setter, have talked of some future contraction, which might sweep up the stars along with cosmic dust and eventually bring the world back to its original state. Dr. Lemaitre thinks that such a contraction cannot occur. He prefers to believe that the whole universe was born in the flash of a cosmic sky-rocket and that it will keep expanding until the showering sparks which form the stars have burned to cinders and ashes.