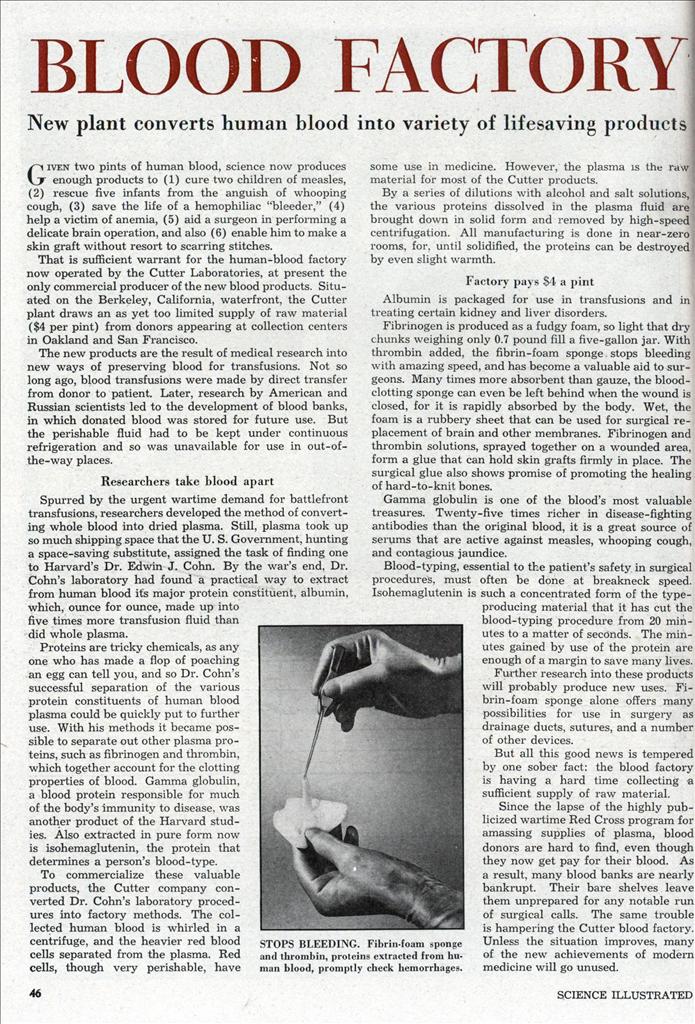 Given two pints of human blood, science now produces enough products to (1) cure two children of measles, (2) rescue five infants from the anguish of whooping cough, (3) save the life of a hemophiliac “bleeder,” (4) help a victim of anemia, (5) aid a surgeon in performing a delicate brain operation, and also (6) enable him to make a skin graft without resort to scarring stitches.

That is sufficient warrant for the human-blood factory now operated by the Cutter Laboratories, at present the only commercial producer of the new blood products. Situated on the Berkeley, California, waterfront, the Cutter plant draws an as yet too limited supply of raw material ($4 per pint) from donors appearing at collection centers in Oakland and San Francisco.

The new products are the result of medical research into new ways of preserving blood for transfusions. Not so long ago, blood transfusions were made by direct transfer from donor to patient. Later, research by American and Russian scientists led to the development of blood banks, in which donated blood was stored for future use. But the perishable fluid had to be kept under continuous refrigeration and so was unavailable for use in out-of-the-way places.

Spurred by the urgent wartime demand for battlefront transfusions, researchers developed the method of converting whole blood into dried plasma. Still, plasma took up so much shipping space that the U. S. Government, hunting a space-saving substitute, assigned the task of finding one to Harvard’s Dr. Edwin J. Cohn. By the war’s end. Dr. Cohn’s laboratory had found a practical way to extract from human blood its major protein constituent, albumin, which, ounce for ounce, made up into five times more transfusion fluid than did whole plasma.

Proteins are tricky chemicals, as any one who has made a flop of poaching an egg can tell you, and so Dr. Cohn’s successful separation of the various protein constituents of human blood plasma could be quickly put to further use. With his methods it became possible to separate out other plasma proteins, such as fibrinogen and thrombin, which together account for the clotting properties of blood. Gamma globulin, a blood protein responsible for much of the body’s immunity to disease, was another product of the Harvard studies. Also extracted in pure form now is isohemaglutenin, the protein that determines a person’s blood-type.

To commercialize these valuable products, the Cutter company converted Dr. Cohn’s laboratory procedures into factory methods. The collected human blood is whirled in a centrifuge, and the heavier red blood cells separated from the plasma. Red cells, though very perishable, have

some use in medicine. However, the plasma is the raw ] material for most of the Cutter products.

By a series of dilutions with alcohol and salt solutions, the various proteins dissolved in the plasma fluid are brought down in solid form and removed by high-speed centrifugation. All manufacturing is done in near-zero rooms, for, until solidified, the proteins can be destroyed by even slight warmth.

Albumin is packaged for use in transfusions and in treating certain kidney and liver disorders.

Fibrinogen is produced as a fudgy foam, so light that dry chunks weighing only 0.7 pound fill a five-gallon jar. With thrombin added, the fibrin-foam sponge stops bleeding with amazing speed, and has become a valuable aid to surgeons. Many times more absorbent than gauze, the blood-clotting sponge can even be left behind when the wound is closed, for it is rapidly absorbed by the body. Wet, the foam is a rubbery sheet that can be used for surgical replacement of brain and other membranes. Fibrinogen and thrombin solutions, sprayed together on a wounded area, form a glue that can hold skin grafts firmly in place. The surgical glue also shows promise of promoting the healing of hard-to-knit bones.

Gamma globulin is one of the blood’s most valuable treasures. Twenty-five times richer in disease-fighting antibodies than the original blood, it is a great source of serums that are active against measles, whooping cough, and contagious jaundice.

Blood-typing, essential to the patient’s safety in surgical procedures, must often be done at breakneck speed. Isohemaglutenin is such a concentrated form of the type-producing material that it has cut the blood-typing procedure from 20 minutes to a matter of seconds. The minutes gained by use of the protein are enough of a margin to save many lives.

Further research into these products will probably produce new uses. Fibrin-foam sponge alone offers many possibilities for use in surgery as drainage ducts, sutures, and a number of other devices.

But all this good news is tempered by one sober fact: the blood factory is having a hard time collecting a sufficient supply of raw material.

Since the lapse of the highly publicized wartime Red Cross program for amassing supplies of plasma, blood donors are hard to find, even though they now get pay for their blood. As a result, many blood banks are nearly bankrupt. Their bare shelves leave them unprepared for any notable run of surgical calls. The same trouble is hampering the Cutter blood factory. Unless the situation improves, many of the new achievements of modern medicine will go unused.