Modern Mechanix
Issue: May, 1934
Posted in: General, Sign of the Times
1 Comment on Bodyguards Face Death to End Kidnap Menace (May, 1934)

What I found really interesting about this article is the picture of Roosevelt on the second page. He was generally tried to hide the fact that he had Polio from the public. But if you look at that picture it’s obvious that he’s holding the man on the right for support. It also looks like he is using his other hand to support him self on a cane and possibly has leg braces under his pants. Rarely do you see unobstructed pictures of F.D.R standing. 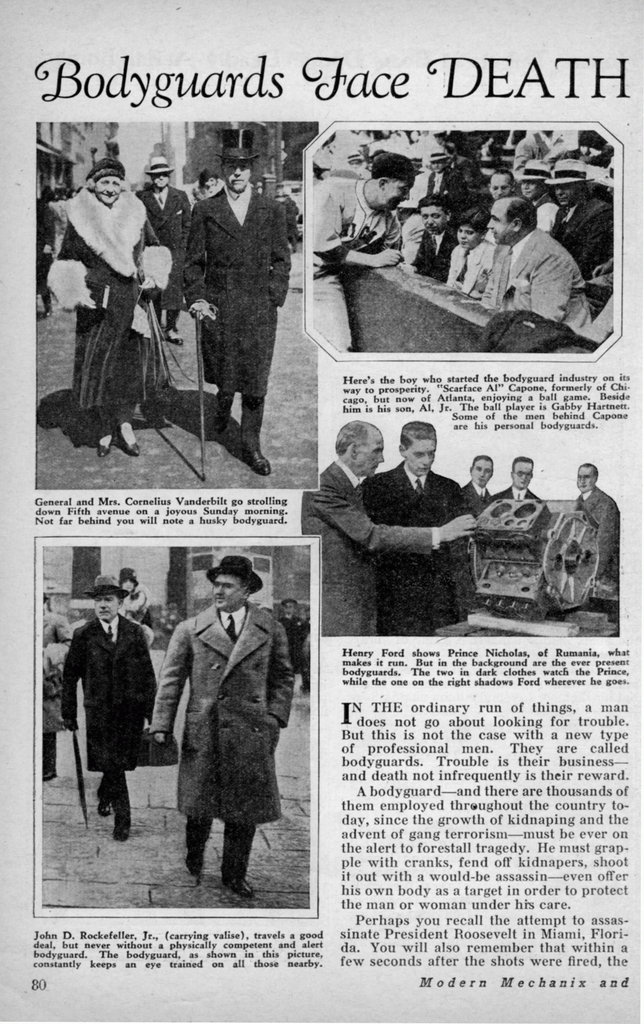 IN THE ordinary run of things, a man does not go about looking for trouble. But this is not the case with a new type of professional men. They are called bodyguards. Trouble is their business Ã¢â‚¬â€ and death not infrequently is their reward.

A bodyguard – and there are thousands of them employed throughout the country today, since the growth of kidnaping and the advent of gang terrorism Ã¢â‚¬â€ must be ever on the alert to forestall tragedy. He must grapple with cranks, fend off kidnapers, shoot it out with a would-be assassin Ã¢â‚¬â€ even offer his own body as a target in order to protect the man or woman under his care.

Perhaps you recall the attempt to assassinate President Roosevelt in Miami, Florida. You will also remember that within a few seconds after the shots were fired, the President found himself surrounded by a wall of human protection. Any more bullets would have had to drill through some faithful guard before reaching the chief executive.

A few years ago, the President of the United States and certain very high governmental officials were the only ones who enjoyed the company of bodyguards. But such is the pathway of modern civilization that today almost every man of wealth or political importance feels unsafe unless his very tracks are dogged by a faithful and physically powerful servant.

The personal bodyguard is a direct product of the era of gangland. Big shots of the underworld, like Al Capone, started the fad as a means of self protection against rivals.

Then, when the gangsters turned to the lucrative pastime of kidnaping wealthy men and women and holding them for ransom, the employment of bodyguards became the vogue among affluent lovers of home-like surroundings.

The requirements of the profession are varied. A man must be courageous and have the physical strength to back up that courage. He must be educated and refined so that he can accompany his employer wherever the latter might go without finding the situation embarrassing. He must be able to wear clothes for all occasions. And he must divest himself of any personal ties which might suffer through long and unrelieved hours of service. For the comfort of his client and the advantage it gives him over a scheming criminal, a bodyguard must look as inconspicuous as possible.