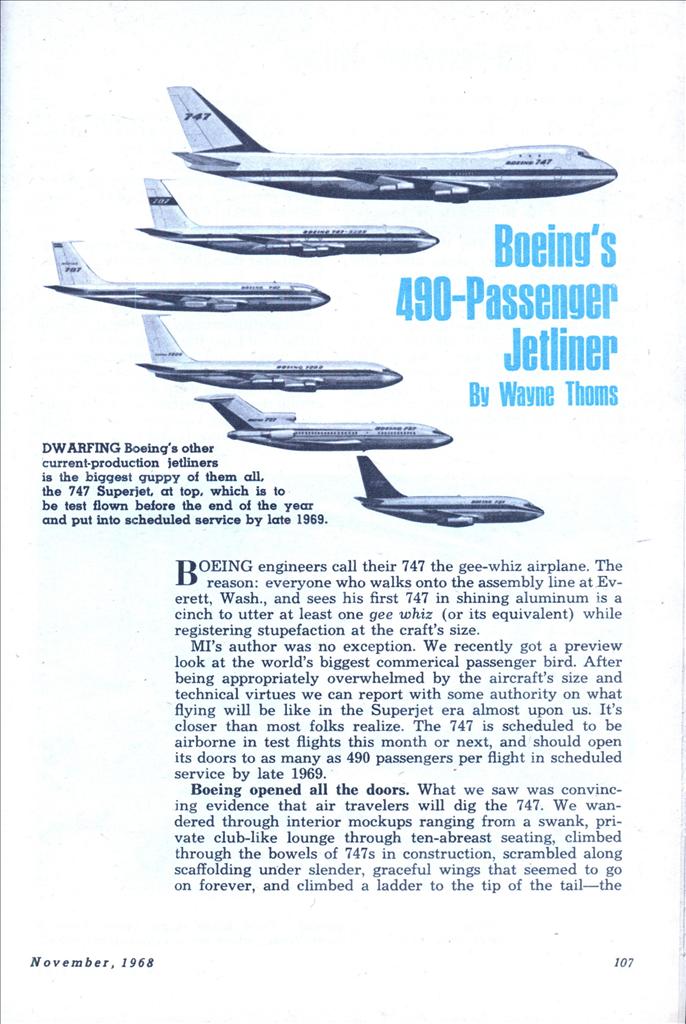 BOEING engineers call their 747 the gee-whiz airplane. The reason: everyone who walks onto the assembly line at Everett, Wash., and sees his first 747 in shining aluminum is a cinch to utter at least one gee whiz (or its equivalent) while registering stupefaction at the craft’s size.

MI’s author was no exception. We recently got a preview look at the world’s biggest commerical passenger bird. After being appropriately overwhelmed by the aircraft’s size and technical virtues we can report with some authority on what flying will be like in the Superjet era almost upon us. It’s closer than most folks realize. The 747 is scheduled to be airborne in test flights this month or next, and should open its doors to as many as 490 passengers per flight in scheduled service by late 1969.

Boeing opened all the doors. What we saw was convincing evidence that air travelers will dig the 747. We wandered through interior mockups ranging from a swank, private club-like lounge through ten-abreast seating, climbed through the bowels of 747s in construction, scrambled along scaffolding under slender, graceful wings that seemed to go on forever, and climbed a ladder to the tip of the tailâ€”the equivalent of a six-story building.

This is going to be the heavyweight of airplanes. At 710,000 lbs. max. gross (more than double that of the 707) it seems incredible that it can get off the groundâ€”let alone fly like an eagle. And we questioned its ability to operate from existing jetports, knowing that concrete runways have weight limitations. Boeing solved this problem by distributing the weight via 16 load-bearing wheels and a dual nose wheel.

As for getting it off the ground, the four Pratt & Whitney JT9D-3 turbofan engines develop 43,500 lbs. of takeoff thrust eachâ€”approximately twice the power of the largest commercial jet engines presently in use. Cruising speed will be Mach .84 to .90, or about 625 mph, ranging to 6,000 mi. Yet, with all this power the engines are designed to be quieter than those on current jet airliners.

As we strolled through the plant, giving the first five planes under construction careful scrutiny, we began to look at the bird from the viewpoint of a pilot. The single- and twin-engine light airplanes we fly routinely are no match for a 747 but we were consumed with a strong desire to at least sit in the cushioned armchair reserved for the pilot, operate the controls and dream of glory on the flight deck for a few moments. We did. It was lovely, even though the cockpit contained no real surprises.

The rows and rows of gauges, switches and flight instruments, along with an engineer’s station behind the pilot seats, reminded us that this was a jet, one which Boeing claims will be easy to fly. We found forward visibility to be somewhat restricted through narrow windows, a condition pretty nearly standard today. The fact is that at jet speeds the human eye isn’t reliable as a collision-avoidance system, which is why the 747 will be a model in automatic guidance systems, mostly in duplicate for back-up protection.

Super-advanced navigational systems will permit accurate flight to virtually anywhere in the world, pinpointing the big bird to landings in near-zero visibility.

After the imaginary flight it was time to become a potential passenger. Boeing showed us everything that will be available in terms of passenger comfort and convenience except for the 15 hostesses who will be on duty on each plane. Here is how it will be for a paying customer: He’ll board through one of the ten entry doors (five per side, each 8 in. wider than the two doors on a 707) arriving through one of several telescoping passageways which will deliver him from the terminal building directly to the position nearest his assigned seat. At some airports, portable boarding ramps still will be in use, but it will take at least three of them to accommodate the full passenger load.

As our passenger heads for his seat he’ll notice that there are two lengthwise aisles and five cross aisles. Both aisles and seats are at least 10 per cent wider than those on existing 707s. Ceiling height is 8 ft. and walls are near-vertical.

Passenger seating will vary according to airline requirements. Basic mixed class will be 58 first-class seats and 308 at lower fares, these latter nine abreast. In another version there will be 61 in first class and 336 arranged ten-abreast. One all-economy setup is 446 seats nine-abreast. Maximum is an all-economy, 490-seat, ten-abreast configuration.

First-class passengers can look forward to using an upper lounge (just behind the flight deck) accessible via a spiral staircase from the main cabin.

The 747 boasts five galley units and 15 lavatories. Something brand-new is the concept of overhead storage lockers. Hand luggage carried aboard will not be permitted under the seat.

Of course, passenger entertainment has not been overlooked. Each chair will have an armrest-mounted control panel which will operate reading lamp, cabin attendant call and a dozen audio channels for music and movies. Those passengers seated in the center section might as well sit back and enjoy the music and movie time in the air, counting it an interlude between cities rather than flight at 45,000 ft. After takeoff they won’t have much sensation of flight and, in any event, they won’t be able to see much out of the distant cabin windows.

To date, 26 airlines have ordered 150 of the 747s, and Pan American gets the first one about the end of 1969. At $20 million per copy, Boeing claims that the 747 will be an economy over the $7-million 707. For one thing, the seat-mile direct operating cost is 32 per cent less for the 747â€”about .8 cent per seat-mile. What makes the airplane even more attractive is the profit potentialâ€”three times greater than today’s jets even though it costs twice as much to operate.

One thing is certain: the 747 must revolutionize air travel if it is to be successful. It is estimated that only 15 per cent of the population flies today. Many more will have to be enticed aboard in the coming years. The airlines even now are planning massive advertising campaigns to sell you some of those extra seats which soon will be available. Boeing predicts that air travel will grow from 175 billion revenue seat-miles (a paying passenger flying one mile is a seat-mile) today to 425 billion by 1975.

If this happens the 747 will be right in there whooshing along. It really is the most of everything we have ever seen in aviation.