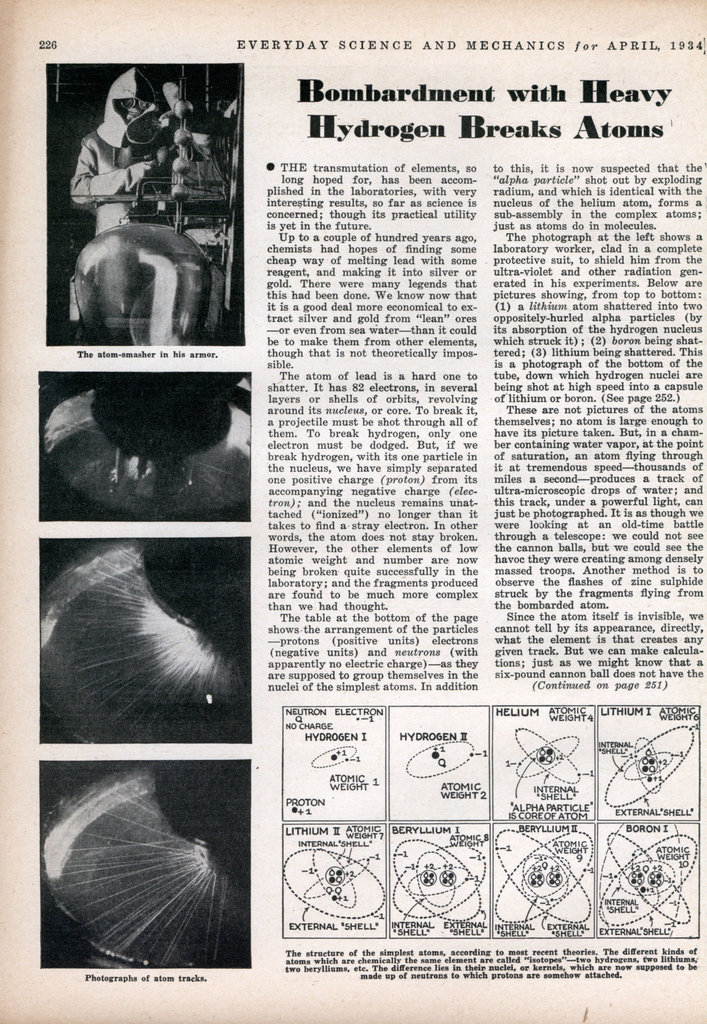 THE transmutation of elements, so long hoped for, has been accomplished in the laboratories, with very interesting results, so far as science is concerned; though its practical utility is yet in the future.

Up to a couple of hundred years ago, chemists had hopes of finding some cheap way of melting lead with some reagent, and making it into silver or gold. There were many legends that this had been done. We know now that it is a good deal more economical to extract silver and gold from “lean” ores —or even from sea water—than it could be to make them from other elements, though that is not theoretically impossible.

The atom of lead is a hard one to shatter. It has 82 electrons, in several layers or shells of orbits, revolving around its nucleus, or core. To break it, a projectile must be shot through all of them. To break hydrogen, only one electron must be dodged. But, if we break hydrogen, with its one particle in the nucleus, we have simply separated one positive charge (proton) from its accompanying negative charge (electron); and the nucleus remains unattached (“ionized”) no longer than it takes to find a stray electron. In other words, the atom does not stay broken. However, the other elements of low atomic weight and number are now being broken quite successfully in the laboratory; and the fragments produced are found to be much more complex than we had thought.

The table at the bottom of the page shows the arrangement of the particles —protons (positive units) electrons (negative units) and neutrons (with apparently no electric charge)—as they are supposed to group themselves in the nuclei of the simplest atoms. In addition to this, it is now suspected that the’ “alpha particle” shot out by exploding radium, and which is identical with the nucleus of the helium atom, forms a sub-assembly in the complex atoms; just as atoms do in molecules.

The photograph at the left shows a laboratory worker, clad in a complete . protective suit, to shield him from the ultra-violet and other radiation generated in his experiments. Below are pictures showing, from top to bottom: (1) a lithium atom shattered into two oppositely-hurled alpha particles (by its absorption of the hydrogen nucleus which struck it); (2) boron being shattered; (3) lithium being shattered. This is a photograph of the bottom of the tube, down which hydrogen nuclei are being shot at high speed into a capsule of lithium or boron. (See page 252.) These are not pictures of the atoms themselves; no atom is large enough to have its picture taken. But, in a chamber containing water vapor, at the point of saturation, an atom flying through it at tremendous speed—thousands of miles a second—produces a track of ultra-microscopic drops of water; and this track, under a powerful light, can just be photographed. It is as though we were looking at an old-time battle through a telescope: we could not see the cannon balls, but we could see the havoc they were creating among densely massed troops. Another method is to observe the flashes of zinc sulphide struck by the fragments flying from the bombarded atom.

Since the atom itself is invisible, we cannot tell by its appearance, directly, what the element is that creates any given track. But we can make calculations; just as we might know that a six-pound cannon ball does not have the (Continued on page 251) momentum of an eighteen-pound cannon ball. In the pictures, it will be seen that the rays from the bombarded boron do not go as far as those from the lithium. Their energy is less; and, though their velocity is high, they will be brought to a stop sooner by the molecules of water vapor which they encounter.

In addition to this, breaking of atoms may be done in a highly magnetic field; if a particle is positively charged—a proton or alpha particle, for instance—it turns to one side under the magnetic pull. If it is negatively charged—an electron— it turns in the opposite direction. And the amount of that curvature, and the distance to which it was thrown, permitted calculation as to the particle’s mass and speed.

But some particles turn neither to the right nor to the left—they keep on going, with comparatively few collisions. The only conclusion which could be reached was that there is a third kind of matter which has no electric charge—the neutron. And it is now believed that, instead of the nucleus of every atom being composed of a number of protons and a smaller number of electrons (the difference being made up by external electrons, at a comparatively great distance from the nucleus), there are neutrons in the hearts of many atoms, to make up the mass. And if, in our bombardment, we can replace a neutron by an alpha particle or vice versa, we can change the atom to one with an atomic weight 3 higher or 3 lower: lithium into beryllium, boron to carbon, fluorine to neon, aluminum to silicon, and back again. However, from a practical standpoint, none of these transformations are worth the expense and trouble. The only thing which would be profitable commercially would be getting a great deal more power out of the experiment than we put into it; and that is problematical. If we could make apparatus to stand the heat that is generated inside the sun, we might do it.

The point is that we cannot pick out any given atom and crack it. We shoot blind; as if we were firing a machine gun at the sky in the hope of hitting a bird from time to time. Chadwick has estimated that 30 neutrons are knocked out of as many atoms of beryllium, by each million alpha particles fired into a target of that metal. The percentage is too low to gain anything from the surplus energy of each hit.

The diagram showing the constitution of the atoms is not drawn to scale; it cannot be. It is estimated that ‘the nucleus of a hydrogen atom, in the normal state, occupies about 1/100,000 of its diameter; that is, if the proton were shown 1/10 inch in diameter, the electron would be out more than a mile and a half away. The radius of the electron is estimated as about twice that of the proton, though the proton has 1840 times the mass of the electron. Let us make an astronomical comparison.

Let us suppose our Earth out where Jupiter is, four times as far from the Sun; let us suppose our Sun, instead of the glowing, gassy ball it is, to be composed of the same stuff as the dwarf stars, fifteen thousand times as heavy as water. It would have half the diameter of the Earth, and nearly two thousand times its mass. (Actually, the Earth’s mass is 1/331,000 of the Sun’s.) We now have a model, in this dwarf star and its lone planet, of an atom of hydrogen. The only difference is that (while all other stars are so far away from our Sun that they have no visible effect on the planets) with our atomic solar system the central bodies of other atoms are frequently coming so near to the nucleus that they continually affect the orbit of the planetary electron and often detach it. Life on the electron in an atom of hydrogen would be brain-racking for its astronomers.

And, in shooting particles as big as the earth through this imaginary hydrogen solar system, we would not often hit its nuclear Sun. They would usually go in, curve their path slightly, and go out again like the comets which occasionally pass through our solar system. An alpha particle, several times bigger than the nucleus • of a hydrogen atom, can go through half a million atoms without hitting anything. In the atomic world, the collision of two nuclei is like the collision of two stars in the astronomical world—a rare occurrence.

Finally, it may be remarked, not all atoms of one element are alike, as we have learned in the last few years. There are two hydrogens, one twice as heavy as the other. Their nuclei are different but, because each has one electron only revolving about it, their chemical activities are the same. What to name them is a question. Urey, Brickwedde and Murphy, who found- the heavy hydrogen, suggest protium and deuterium—after discarding suggestions of “haplogen,” “bar-hydrogen,” “barogen,” “pycnogen” and other Greek names. Rutherford suggests “diplogen”; and the heavy nuclei or deutons of the new element, which are twice as heavy as protons, have proved handy in bombarding other elements.

These two forms of one element are called isotopes; lithium has two, so that its atomic weight is neither 6 nor 7, but 6.9 on the average; beryllium two (according to Oehlinger); boron two—and, when we get up to the more complicated elements, several have six, seven and eight. Xenon has nine, and tin eleven.

Mendelejeff, the father of modern chemical classification, expected to find elements with atomic weights below hydrogen, and also a metal of atomic weight three, to go below helium. Modern chemists have not been so hopeful of finding them. Yet if there are, as reported, positive electrons or positrons, with a mass about that of an electron, as some experiments have indicated, there may be atoms with 1/920 the weight of hydrogen. These, like the neutrons, would pass through any container which we have; and their presence would only be indicated in strong magnetic fields. When beryllium is bombarded, as shown, the positive electrons appear; and this has led to a belief that they are actually created by the conversion of energy into matter.

The positrons have been observed for little more than a year, but it is now computed that they make up a considerable part of the mass of the universe, forming great clouds of matter in the spaces between galaxies or star-systems, according to Blackett. Now, indeed, the question is arising as to whether the positron may not account for the charges on the nuclei of atoms, accompanied by the heavy neutrons which have comparatively large mass but little or no external electrical field. That is, instead of protons in our diagrams of atoms, we should have neutrons, each with a positron somehow attached.

There is, undoubtedly, a great deal yet to be discovered about the real nature of atoms and, as the electrical equipment for breaking them down increases in power, new forms of matter may be discovered, or created, at any moment. ~ Other articles dealing with atomic theory will appear in later issues.