Popular Science
Issue: May, 1941
Posted in: Architecture, Impractical, War
17 Comments on Bombproof Plane Factories ROLL INTO MOUNTAIN SIDE (May, 1941)

Bombproof Plane Factories ROLL INTO MOUNTAIN SIDE (May, 1941)

Wouldn’t it be easier to just build the factory in the mountain and leave it there? 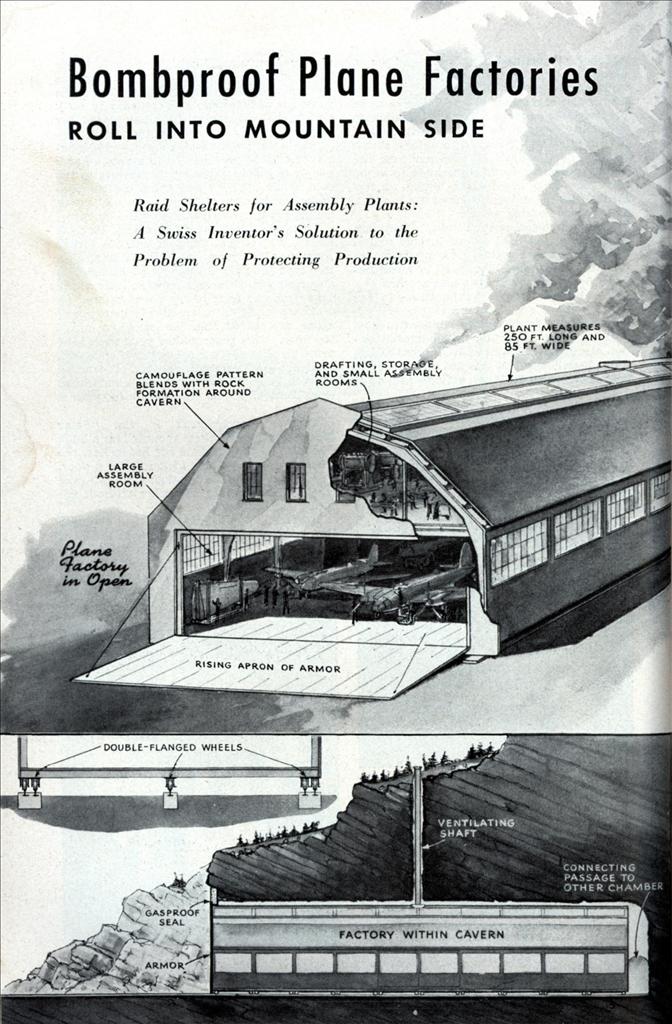 Raid Shelters for Assembly Plants: A Swiss Inventor’s Solution to the Problem of Protecting Production AIRPLANE FACTORIES that literally run to shelter from raiding bombers have been invented by Antoine Gazda, noted Swiss armament designer, and erected at undisclosed places in Switzerland by the Pilatus aircraft concern as a national-defense precaution. A typical installation consists of a pair of twin assembly plants, normally standing in the open where their total of 360 workers enjoy natural sunshine and fresh air. At an air-raid alarm signal, however, a “motorman” enters a control cabin at the rear center of each plant’s upper floor. He swings a switch handle, and the entire 1,600-ton factory rolls ponderously on electric-powered wheels into a cavern in a mountain side, completing its strange journey in about twenty minutes. Only its front remains exposed, and steel armor covers this end.

Meanwhile, workers reconnect quick-change electric and plumbing fittings to mains within the cavern, and attach a ventilating tube whose intake is hidden. Then the plant resumes full operation under artificial-daylight lamps. In case of a poison-gas attack, the front portal can be hermetically sealed, and fresh air drawn in through the ventilator is filtered and purified. When danger has passed, an “all clear” signal from observers brings the factory out into the open again.