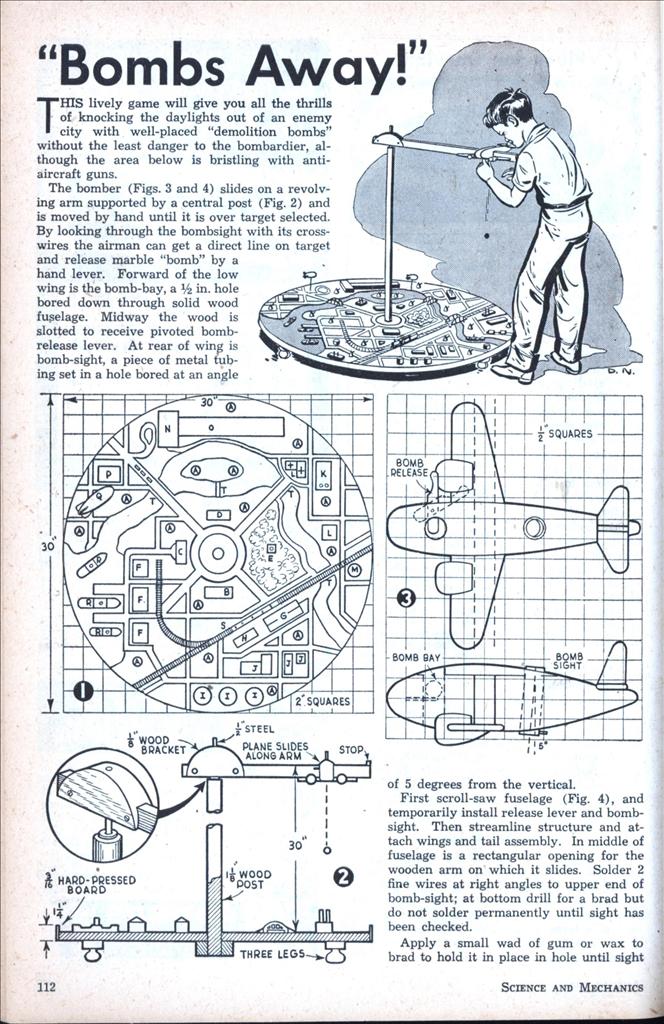 THIS lively game will give you all the thrills of knocking the daylights out of an enemy city with well-placed “demolition bombs” without the least danger to the bombardier, although the area below is bristling with antiaircraft guns.

The bomber (Figs. 3 and 4) slides on a revolving arm supported by a central post (Fig. 2) and is moved by hand until it is over target selected. By looking through the bombsight with its cross-wires the airman can get a direct line on target and release marble “bomb” by a hand lever. Forward of the low wing is the bomb-bay, a 1/2 in. hole bored down through solid wood fugelage. Midway the wood is slotted to receive pivoted bomb-release lever. At rear of wing is bomb-sight, a piece of metal tubing set in a hole bored at an angle has been properly adjusted (Fig. 5). Suspend a small plumb-bob, such as a .22 bullet, by a thread from center of bomb-bay, and sight through eye-piece. Bottom of bob and line of vision along sights should coincide. Move brad slightly up or down in hole in tube to adjust, then solder brad in place.

Paint on platform buildings, tanks, bridges, etc., or construct 3-dimensional subjects designed to collapse or topple over (Fig. 6). Beveled roofs cause end walls to spread under a direct hit, theoretically wrecking the building. Trains, boats and bridges are balanced on a narrow base and full over under a direct hit. The barrage balloon, precariously balanced on a wire loop, is easily knecked down. A rim around the circular platform prevents bombs from rolling away. Streets of the city (Fig. 1) are painted gray, river light blue, railway black, buildings in appropriate colors or camouflage, and unoccupied spaces green.

Each bombardier is supplied with a dozen bombs of one color, different colors for each player. Tally correct number of points (see Table A) for various targets; the largest number of points are for the most difficult targets, which, of course are the smallest. When a hit is made on a hospital, school, church or library, the bombardier loses points, as indicated. First bombardier to tally 151 points wins the game.

Now you can organize a bombing squadron and let the small fry fire away without your having a care in the world about any real damage being done.—Hi Sibley.