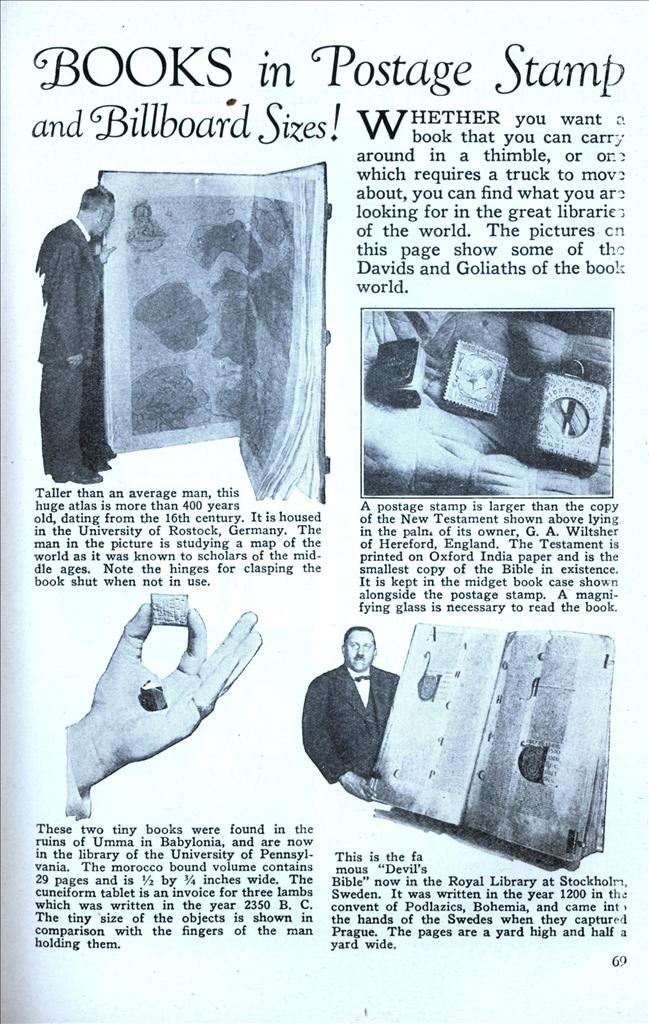 WHETHER you want a book that you can carry around in a thimble, or one which requires a truck to move about, you can find what you are looking for in the great libraries of the world. The pictures on this page show some of the Davids and Goliaths of the book world.

Taller than an average man, this huge atlas is more than 400 years old, dating from the 16th century. It is housed in the University of Rostock, Germany. The man in the picture is studying a map of the world as it was known to scholars of the middle ages. Note the hinges for clasping the book shut when not in use.

These two tiny books were found in the ruins of Umma in Babylonia, and are now in the library of the University of Pennsylvania. The morocco bound volume contains 29 pages and is 1/2 by 3/4 inches wide. The cuneiform tablet is an invoice for three lambs which was written in the year 2350 B. C. The tiny size of the objects is shown in comparison with the fingers of the man holding them.

A postage stamp is larger than the copy of the New Testament shown above lying in the palm of its owner, G. A. Wiltsher of Hereford, England. The Testament is printed on Oxford India paper and is the smallest copy of the Bible in existence. It is kept in the midget book case shown alongside the postage stamp. A magnifying glass is necessary to read the book.

This is the famous “Devil’s Bible” now in the Royal Library at Stockholm, Sweden. It was written in the year 1200 in the convent of Podlazics, Bohemia, and came in to the hands of the Swedes when they captured Prague. The pages are a yard high and half a yard wide.