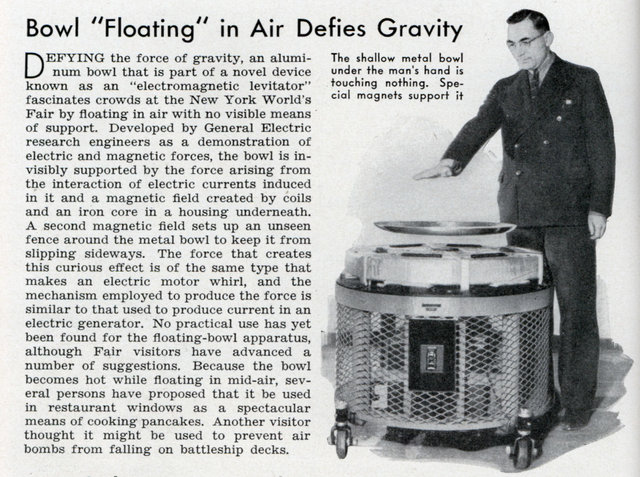 DEFYING the force of gravity, an aluminum bowl that is part of a novel device known as an “electromagnetic levitator” fascinates crowds at the New York World’s Fair by floating in air with no visible means of support. Developed by General Electric research engineers as a demonstration of electric and magnetic forces, the bowl is invisibly supported by the force arising from the interaction of electric currents induced in it and a magnetic field created by coils and an iron core in a housing underneath. A second magnetic field sets up an unseen fence around the metal bowl to keep it from slipping sideways. The force that creates this curious effect is of the same type that makes an electric motor whirl, and the mechanism employed to produce the force is similar to that used to produce current in an electric generator. No practical use has yet been found for the floating-bowl apparatus, although Fair visitors have advanced a number of suggestions. Because the bowl becomes hot while floating in mid-air, several persons have proposed that it be used in restaurant windows as a spectacular means of cooking pancakes. Another visitor thought it might be used to prevent air bombs from falling on battleship decks.