Wow, this is a pretty impressive high-school project. 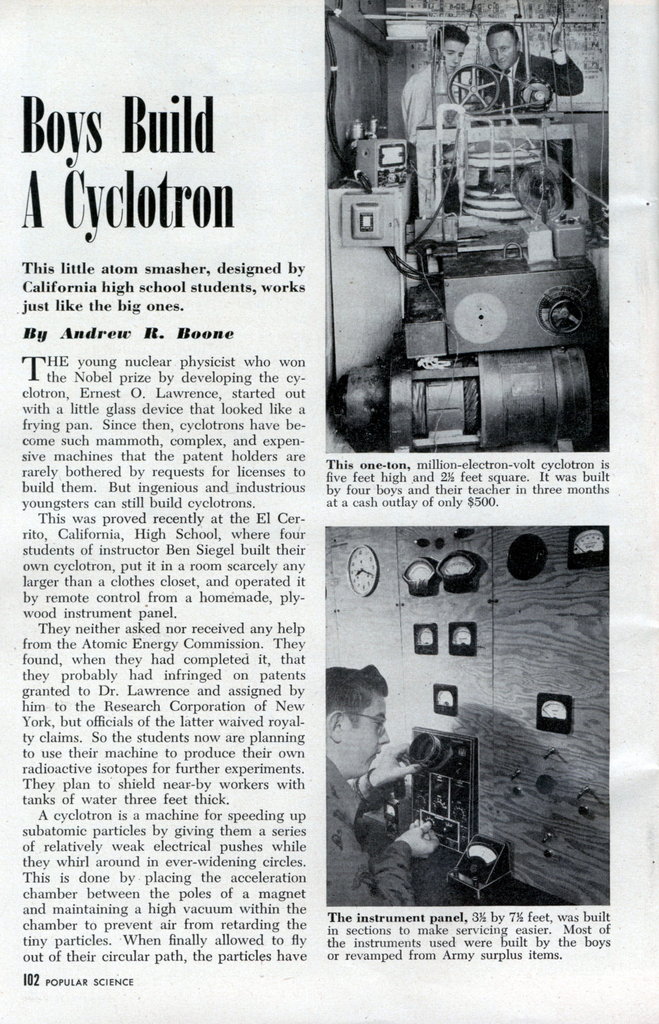 This little atom smasher, designed by California high school students, works just like the big ones.

THE young nuclear physicist who won the Nobel prize by developing the cyclotron, Ernest O. Lawrence, started out with a little glass device that looked like a frying pan. Since then, cyclotrons have become such mammoth, complex, and expensive machines that the patent holders are rarely bothered by requests for licenses to build them. But ingenious and industrious youngsters can still build cyclotrons.

This was proved recently at the El Cerrito, California, High School, where four students of instructor Ben Siegel built their own cyclotron, put it in a room scarcely any larger than a clothes closet, and operated it by remote control from a homemade, plywood instrument panel.

They neither asked nor received any help from the Atomic Energy Commission. They found, when they had completed it, that they probably had infringed on patents granted to Dr. Lawrence and assigned by him to the Research Corporation of New York, but officials of the latter waived royalty claims. So the students now are planning to use their machine to produce their own radioactive isotopes for further experiments. They plan to shield near-by workers with tanks of water three feet thick.

A cyclotron is a machine for speeding up subatomic particles by giving them a series of relatively weak electrical pushes while they whirl around in ever-widening circles. This is done by placing the acceleration chamber between the poles of a magnet and maintaining a high vacuum within the chamber to prevent air from retarding the tiny particles. When finally allowed to fly out of their circular path, the particles have so much energy that they can be used as bullets against the atoms of whatever substance has been chosen as a target.

Building such an atom-smasher, however, is much more of a trick than describing one. The El Cerrito boys had seen Dr. Lawrence’s big cyclotron, and knew what it did, but they started to build one without any detailed plans for the many intricate parts that constitute such a machine. “We knew,” Siegel told Popular Science Monthly, “we’d need a magnet, an acceleration chamber, and a high vacuum.” Under his direction, they studied all the literature available, worked day and night, telephoned to friends for advice when they were stuck, and built their baby cyclotron in a record time of only three months.

El Cerrito’s shops could not handle the big piece of soft steel chosen for the magnet, so they went to the Oakland Central Trade School for help. There the chunks were ground down and welded into a double yoke weighing half a ton. Winding the coils was the toughest part of the El Cerrito boys’ work. For a week, they stood at a lathe, winding five miles of 13-gauge wire manually, counting each turn aloud until 6,000 turns had been made. As a result of their painstaking care, the magnet now will lift a two-ton anvil.

To create the necessary vacuum within the acceleration chamber, they use two pumps. The first, or “roughing,” pump is an ordinary mechanical pump driven by a quarter-horsepower electric motor. The second, which takes over when the first one has completed its work, is an intricate, mercury diffusion pump, built with the help of an expert glass blower at the University of California. Many different combinations of sealers were tried before a way was found to prevent air from leaking in, but Siegel now believes that the apparatus can produce a vacuum equivalent to only a very minute fraction of an atmosphere.

The electrical circuits were also troublesome. They had to be redesigned repeatedly before they functioned properly. Everything in the power system was built oversize purposely, however, because the students hope to build a larger cyclotron chamber later for bigger atom-smashing experimentsâ€”and the electrical system they now have will be adequate for their next, bigger cyclotron.