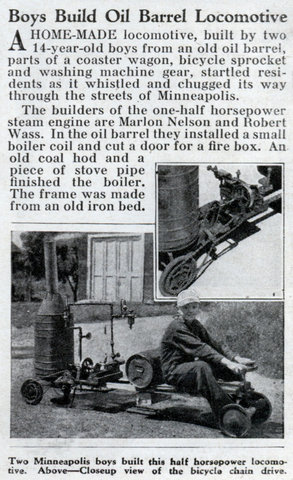 A HOME-MADE locomotive, built by two 14-year-old boys from an old oil barrel, parts of a coaster wagon, bicycle sprocket and washing machine gear, startled residents as it whistled and chugged its way through the streets of Minneapolis.

The builders of the one-half horsepower steam engine are Marlon Nelson and Robert Wass. In the oil barrel they installed a small boiler coil and cut a door for a fire box. An old coal hod and a piece of stove pipe finished the boiler. The frame was made from an old iron bed.