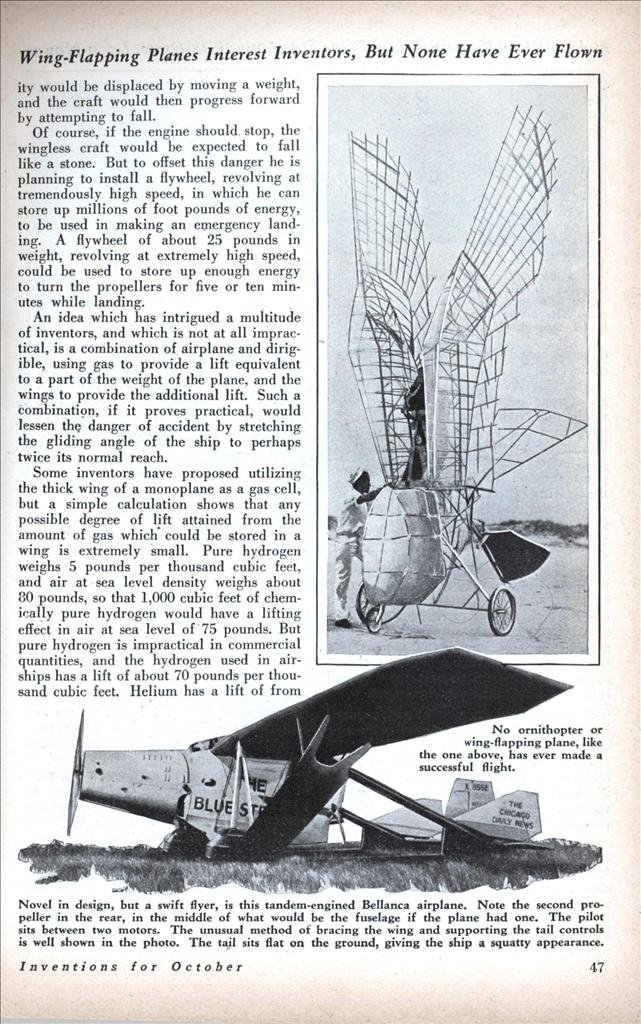 “Brain Wave” Airplanes ~ Will They Fly?

Will the airplane of tomorrow develop out of present day “brain wave” designs, so-called because of their freakish departure from generally accepted principles? It is quite possible, as Mr. Miller points out, that the airplane of the future will be entirely different from conventional types we are accustomed to.

WHAT will the airplane of the future look like?

Will heavier-than-air craft continue to develop along present lines, with refinement of detail, or will something radically different be produced and prove better than existing planes?

When the De la Cierva auto-giro made its first appearance in England an aviation authority condemned it on the grounds that it “didn’t look like an airplane” and therefore couldn’t be much good.

Another authority countered by asking what an airplane should look like. There is no reason for believing, he pointed out, that because airplanes have developed along certain lines that those lines are the best, safest or most efficient. With the exception of the few planes equipped with the new Packard Diesel engine, the airplane power plant is a direct descendant of the Wright brothers’ original four-cylinder gasoline engine. The propeller has changed but little from the first one they whittled out, though there is reason to believe that a radically different’ type of propeller might be more efficient and is bound to come. And the plane itself is still based on the earliest models.

Helicopters, such as the one recently built in the Curtiss plant on Long Island, ornithopters and orthopters all represent attempts to get away from the standardized design and produce something new and better. A helicopter, as you probably know, is a machine designed to rise and descend vertically and hover over any given spot. An ornithopter is a flapping wing machine supposed to be a mechanical copy of a bird’s wing, and an orthopter is a flapping wing machine which the inventor believes is an improvement on a bird. A famous aviation editor once described an ornithopter as the inventor’s idea of how a bird’s wing worked, and an orthopter as the designer’s idea of how a bird’s wing should work if the Creator had known anything about aerodynamics.

The Curtiss-Bleecker helicopter is unique in that it has no propeller for forward motion, being equipped with only revolving wings for lifting. The theory is that the ship will move forward by tilting its center of gravity to start it falling, while it will actually fall forward instead of down, because of the lifting effect of the revolving wings.

You can demonstrate the theory easily by holding a board or piece of cardboard in one hand, with the free end inclined downward, and start a pencil rolling down it. The pencil loses altitude as it rolls, but if at the same time you lift your hand and raise the board you can make the pencil, while falling, maintain its altitude, or even increase it.

A Chicago inventor has gone even farther than Bleecker, for he is building a heavier-than-air machine which has no wings. It is a cigar-shaped metal body, approximately thirty feet long, equipped with small retractible, feathering propellers on either side. The blades revolve in drums partly within the body, and as each blade emerges through the side it is turned by a cam arrangement, sweeps downward, feathers and withdraws again into the body. There are eight blades on either side, and the surface area is extremely small.

His theory is, and wind tunnel tests have shown some reason for believing it might work, that the small, specially shaped, high speed blades will sweep the air downward from above the ship, creating a partial vacuum, and the normal air pressure beneath the ship, of 15 pounds per square inch at sea level pressure, plus the increased pressure of the displaced air, will force the ship upward into this vacuum. Altitude attained, the center of gravity would be displaced by moving a weight, and the craft would then progress forward by attempting to fall.

Of course, if the engine should stop, the wingless craft would be expected to fall like a stone. But to offset this danger he is planning to install a flywheel, revolving at tremendously high speed, in which he can store up millions of foot pounds of energy, to be used in making an emergency landing. A flywheel of about 25 pounds in weight, revolving at extremely high speed, could be used to store up enough energy to turn the propellers for five or ten minutes while landing.

An idea which has intrigued a multitude of inventors, and which is not at all impractical, is a combination of airplane and dirigible, using gas to provide a lift equivalent to a part of the weight of the plane, and the wings to provide the additional lift. Such a combination, if it proves practical, would lessen the danger of accident by stretching the gliding angle of the ship to perhaps twice its normal reach.

Assuming hydrogen is used, an average monoplane wing would not have space for more than 350 to 400 cubic feet, at the most, in fact the great majority could not contain more than 150 to 200, so the lifting effect attained would be almost nil. There is no reason for believing that a lifting gas superior to hydrogen will ever be found, but even if such a gas should be discovered, no gas could be superior to a perfect vacuum, which would weigh nothing, and, with the difference in weight between air at sea level and a perfect vacuum being but 80 pounds, that is the absolute maximum which might be attained, and only 5 pounds per thousand cubic feet better than pure hydrogen.

If a plane and an airship are combined it therefore follows that the gas bag must be on the exterior of the ship.

Taking the Stinson Detroiter, six place cabin monoplane as an example of a type which might be combined with lifting gas, something of the following sort might be worked out: The Detroiter, with Wright J-6 300 h. p. engine, weighs 2,614 pounds empty and 4,300 with fuel and pay load. Assuming a cigar shaped, metal gas bag, built after the plan of the Navy’s all metal dirigible, could be attached above the wing and fuselage, with a cubic capacity equal to one-half the weight of the ship, and that the combined weight of the ship and gas bag would be held to 5,000 pounds, then a gas bag of 35,714 cubic feet capacity would be needed, as that amount of commercial hydrogen would have a lift of 2,500 pounds.

A bag of 35,714 cubic feet capacity would be equivalent to one ten feet square and 35.7 feet long. Because of the head resistance which the bag would offer to the wind its diameter should be kept as small as possible. Assuming the greatest diameter of the stream-lined metal gas container to be 12 feet, its length probably would approximate 50 feet. The length can vary greatly depending on the stream-line shape.

The Detroiter, which has a wing spread of 47 feet 1 inch and stands 8 feet 11% inches high, has a length of 32 feet 8 inches. A gas bag 50 feet long therefore would exceed the present airplane length by 17 feet 4 inches. The nose, however, could project beyond the propeller, and the small tail, being several feet above the tail, could project to the rear, so that would offer no particular problem.

The finished ship, because of the lifting effect of the gas, would have an apparent weight of but 2,500 pounds against 4,300 for the standard plane, so less power would ‘ be required to move the weight. But the air resistance of the bag would be so great that it is probable considerable more power would be required to move the combination. The J-6 motor of 300 h. p. weighs 530 pounds, and the new 500 h.p. Cyclone weighs approximately 620 pounds. Therefore the more powerful engine, with 200 extra horse power, could be substituted to get the power to move the ship off the ground. Once in the air, with only 2,500 pounds plus the head resistance of the bag to move, the engine could be throttled down to save gas.

In event of engine failure the wing spread of a 4,300 pound ship -would be available to land one with an apparent weight of only 2.500 pounds, which would mean a much longer glide, and therefore a much higher degree of safety.

Of course in combining a gas bag and a plane the plane itself might be radically changed. The tail would offer the biggest problem. Airplanes can bank sharply, perform aerobatics, and be maneuvered easily because the tail surfaces are placed in the slip stream. An airship, with its rudders and elevators mounted along the tail of the gas bag, and traveling at much slower speed, is slow to respond to the controls and can cut only the widest of circles.

The combination ship, because of the resistance of the bag, would be slow on the controls, which is no drawback for straight commercial flying. It is possible, therefore, that the fuselage tail might be curved upward to fit under the bag, or left off entirely, and the. control surfaces mounted on the bag.

Another suggestion that has been made is a standard plane with a fabric bag carried in a pocket along the top of the fuselage, to be inflated from gas cylinders in the cabin in emergency, just as an airplane parachute would be released under the same circumstances. The theory is that a parachute large enough to lower the plane stops forward movement, and therefore makes it impossible to pick a landing spot, while a stream-lined gas bag, inflated above the ship, would still enable the pilot to glide and pick his own field.

The trouble is that the weight of gas cylinders would be excessive. The standard large size hydrogen cylinder weighs. 135 pounds, and contains 191 cubic feet of gas, compressed at 2,000 pounds pressure. It would take 181 such tanks, weighing more than twelve and a half tons, to furnish enough gas to give a 2,500 pound lift.

Dozens of inventors are working on the problem of combining the lifting effect of gas with the lifting power of a moving wing. The figures quoted in this article would indicate that if a successful solution is found it will be a combination in which not more than half of the entire load will be supported by gas, for beyond that figure the size of the gas bag and its head resistance become prohibitive to speed and maneuverability, the two points which have made the airplane successful.

The successful ship, if it is produced, may not be anything like the one suggested. It may have the wings mounted from the sides of the gas bag instead of below it, and the power plant and propeller may be in the nose of the bag, or divided into a twin engine installation carried in nacelles slung beneath’ the wings. The latter idea has its advantages in maneuvering, for one engine can be retarded and the other sped up to make quicker turns. Also one engine would keep the ship afloat, with half the load supported by gas.

Anyway, it is an interesting problem, and the activity of various inventors indicate it may soon be tackled in earnest, and perhaps solved. For it is a fairly safe bet that the airplane as at present developed is far from being the last word in heavier-than-air navigation.