I love that picture on the first page. He really looks like he’s thinking hard. It seems like he was quite the bright guy.

The obituaries don’t say what he died from. If I had to take a guess, I’d go with the 60 cigarettes a day he smoked. 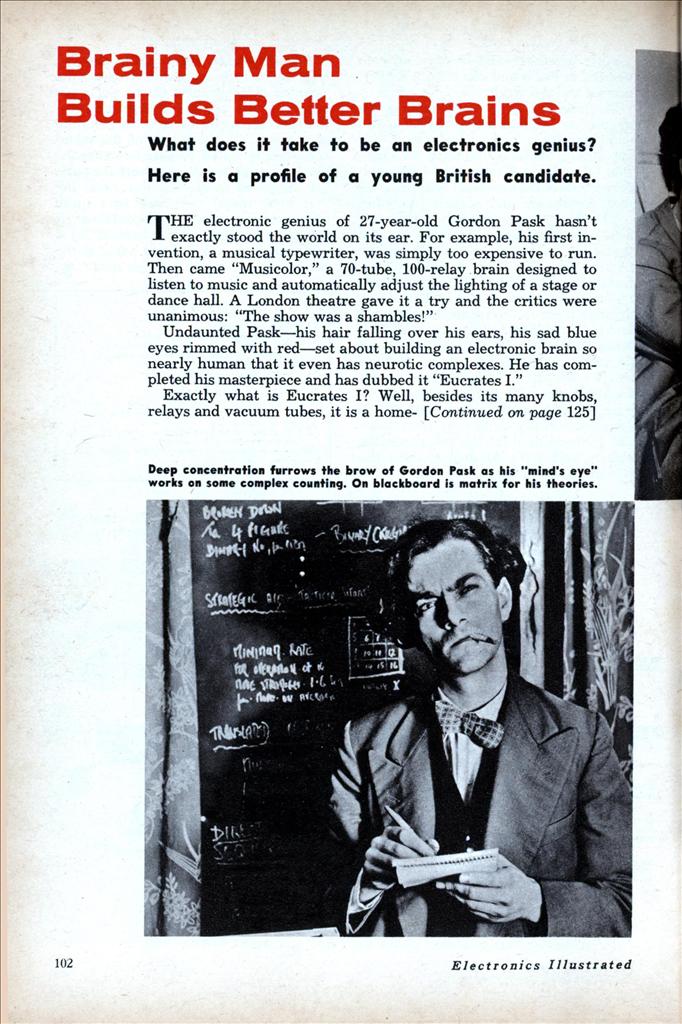 What does it take to be an electronics genius? Here is a profile of a young British candidate.

THE electronic genius of 27-year-old Gordon Pask hasn’t exactly stood the world on its ear. For example, his first invention, a musical typewriter, was simply too expensive to run. Then came “Musicolor,” a 70-tube, 100-relay brain designed to listen to music and automatically adjust the lighting of a stage or dance hall. A London theatre gave it a try and the critics were unanimous: “The show was a shambles!”

Undaunted Pask—his hair falling over his ears, his sad blue eyes rimmed with red—set about building an electronic brain so nearly human that it even has neurotic complexes. He has completed his masterpiece and has dubbed it “Eucrates I.”

Exactly what is Eucrates I? Well, besides its many knobs, relays and vacuum tubes, it is a home- built computer that can remember what it is taught and will try to make humanlike decisions on a practical level. Pask is of the opinion that our complex industrial society requires semi-human machines capable of teaching humans intricacies of other semi-human machines. Eucrates I and a special companion device called “The Teacher,” can be set up to interview a job applicant or to teach skills such as operating radar equipment, typewriting, piloting aircraft, driving cars or playing a musical instrument. By asking a series of questions and outlining situations that may arise, the device, in effect, forces the interviewee or the student to make a decision. If the student makes a wrong decision, signs of electronic emotion— equivalent to bursting into tears—are displayed. The computer-teacher then eases up on the student.

In 1950, Pask teamed with physicist Bobbie McKinnon Wood and set up their own business, Systems Research Ltd., which aims at bringing British and world automation up to the highest possible standards. Pask lives at Number 5, Jordan’s Yard, just behind St. John’s College, Cambridge, England.