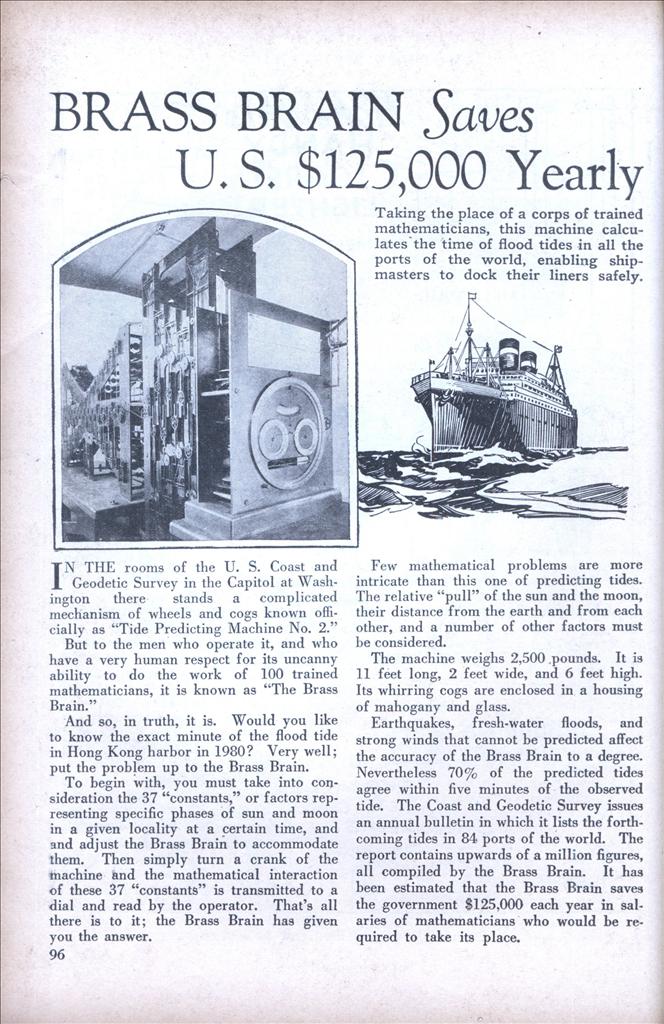 IN THE rooms of the U. S. Coast and Geodetic Survey in the Capitol at Washington there stands a complicated mechanism of wheels and cogs known officially as “Tide Predicting Machine No. 2.”

But to the men who operate it, and who have a very human respect for its uncanny ability to do the work of 100 trained mathematicians, it is known as “The Brass Brain.”

And so, in truth, it is. Would you like to know the exact minute of the flood tide in Hong Kong harbor in 1980? Very well; put the problem up to the Brass Brain.

To begin with, you must take into consideration the 37 “constants,” or factors representing specific phases of sun and moon in a given locality at a certain time, and and adjust the Brass Brain to accommodate them. Then simply turn a crank of the machine and the mathematical interaction of these 37 “constants” is transmitted to a dial and read by the operator. That’s all there is to it; the Brass Brain has given you the answer.

Few mathematical problems are more intricate than this one of predicting tides. The relative “pull” of the sun and the moon, their distance from the earth and from each other, and a number of other factors must be considered.

The machine weighs 2,500 pounds. It is 11 feet long, 2 feet wide, and 6 feet high. Its whirring cogs are enclosed in a housing of mahogany and glass.

Earthquakes, fresh-water floods, and strong winds that cannot be predicted affect the accuracy of the Brass Brain to a degree. Nevertheless 70% of the predicted tides agree within five minutes of the observed tide. The Coast and Geodetic Survey issues an annual bulletin in which it lists the forthcoming tides in 84 ports of the world. The report contains upwards of a million figures, all compiled by the Brass Brain. It has been estimated that the Brass Brain saves the government $125,000 each year in salaries of mathematicians who would be required to take its place.