While it does have that whole Minecraft/8-bit look about it, that is a pretty terrible rendition of a lion. 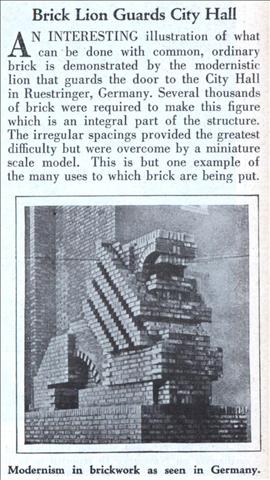 AN INTERESTING illustration of what can be done with common, ordinary brick is demonstrated by the modernistic lion that guards the door to the City Hall in Ruestringer, Germany. Several thousands of brick were required to make this figure which is an integral part of the structure. The irregular spacings provided the greatest difficulty but were overcome by a miniature scale model. This is but one example of the many uses to which brick are being put.