Modern Mechanix
Issue: May, 1932
Posted in: Television, Toys and Games
6 Comments on Bridge Games Shown from Life on Screen (May, 1932)

Bridge Games Shown from Life on Screen (May, 1932)

Celebrity Basement Bridge doesn’t really have the same ring to it. 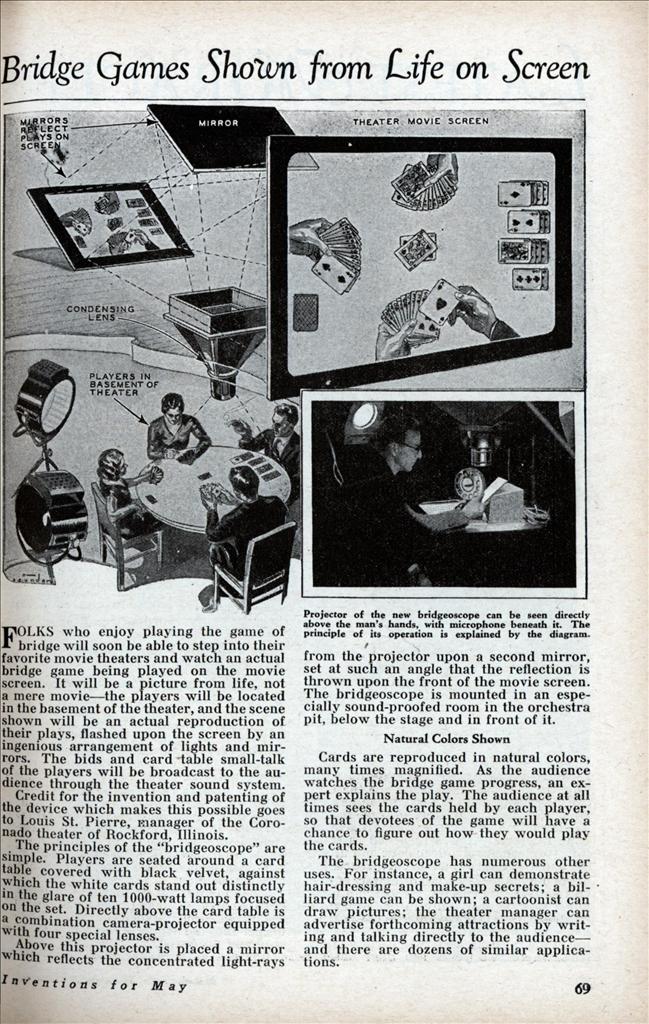 FOLKS who enjoy playing the game of bridge will soon be able to step into their favorite movie theaters and watch an actual bridge game being played on the movie screen. It will be a picture from life, not a mere movie—the players will be located in the basement of the theater, and the scene shown will be an actual reproduction of their plays, flashed upon the screen by an ingenious arrangement of lights and mirrors. The bids and card table small-talk of the players will be broadcast to the audience through the theater sound system.

Credit for the invention and patenting of the device which makes this possible goes to Louis St. Pierre, manager of the Coronado theater of Rockford, Illinois.Bridge Games Shown from Life on Screen

The principles of the “bridgeoscope” are simple. Players are seated around a card table covered with black velvet, against which the white cards stand out distinctly m the glare of ten 1000-watt lamps focused on the set. Directly above the card table is a combination camera-projector equipped Ik special lenses. above this projector is placed a mirror reflects the concentrated light-rays from the projector upon a second mirror, set at such an angle that the reflection is thrown upon the front of the movie screen. The bridgeoscope is mounted in an especially sound-proofed room in the orchestra pit, below the stage and in front of it.

Natural Colors Shown Cards are reproduced in natural colors, many times magnified. As the audience watches the bridge game progress, an expert explains the play. The audience at all times sees the cards held by each player, so that devotees of the game will have a chance to figure out how they would play the cards.

The bridgeoscope has numerous other uses. For instance, a girl can demonstrate hair-dressing and make-up secrets; a billiard game can be shown; a cartoonist can draw pictures; the theater manager can advertise forthcoming attractions by writing and talking directly to the audience— and there are dozens of similar applications.