Broadcasting from a Submarine (Mar, 1931) 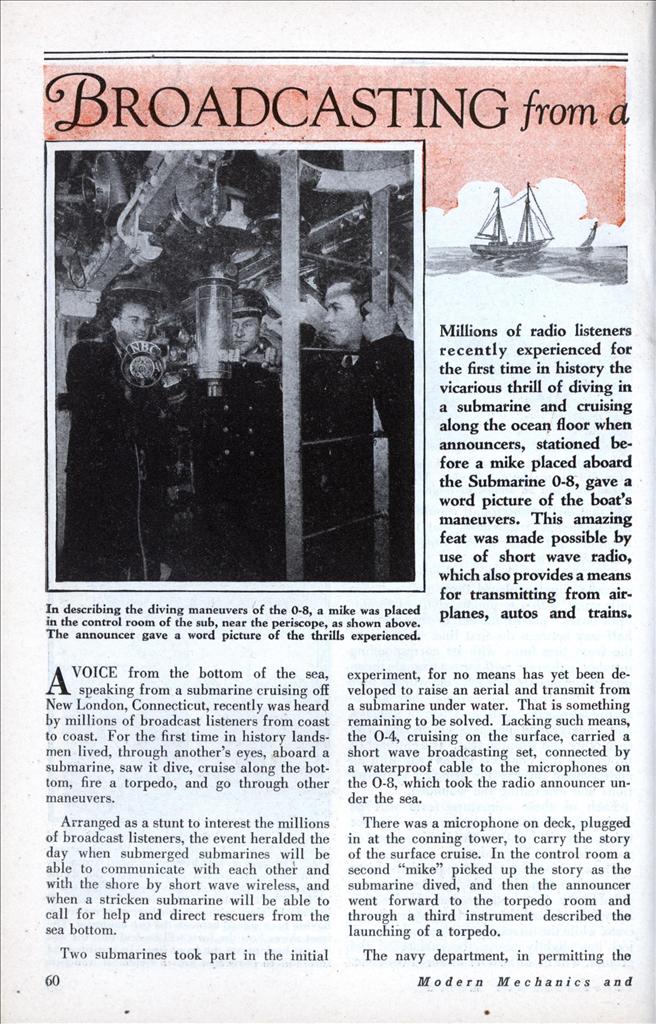 Broadcasting from a Submarine

Millions of radio listeners recently experienced for the first time in history the vicarious thrill of diving in a submarine and cruising along the ocean floor when announcers, stationed before a mike placed aboard the Submarine 0-8, gave a word picture of the boat’s maneuvers. This amazing feat was made possible by use of short wave radio, which also provides a means for transmitting from airplanes, autos and trains.

A VOICE from the bottom of the sea, speaking from a submarine cruising off New London, Connecticut, recently was heard by millions of broadcast listeners from coast to coast. For the first time in history landsmen lived, through another’s eyes, aboard a submarine, saw it dive, cruise along the bottom, fire a torpedo, and go through other maneuvers.

Arranged as a stunt to interest the millions of broadcast listeners, the event heralded the day when submerged submarines will be able to communicate with each other and with the shore by short wave wireless, and when a stricken submarine will be able to call for help and direct rescuers from the sea bottom.

Two submarines took part in the initial experiment, for no means has yet been developed to raise an aerial and transmit from a submarine under water. That is something remaining to be solved. Lacking such means, the 0-4, cruising on the surface, carried a short wave broadcasting set, connected by a waterproof cable to the microphones on the 0-8, which took the radio announcer under the sea.

There was a microphone on deck, plugged in at the conning tower, to carry the story of the surface cruise. In the control room a second “mike” picked up the story as the submarine dived, and then the announcer went forward to the torpedo room and through a third instrument described the launching of a torpedo.

The navy department, in permitting the placing of a microphone on a submarine for the first time in history, was interested not only in letting the public know what life on a submarine is like, but also in the possibilities of utilizing this new device to aid the submarines in war and in rescue work.

One of the rescue devices recently added to submarine equipment is a telephone buoy, which rises to the surface and carries telephone connections. But hours may pass before it is seen, and if some means can be found to broadcast signals from the sea bottom, the radio not only can carry the distress message in event of accident, but, with radio compasses on the rescue ships, can lead them direct to the spot.

Each time a submarine puts to sea for a practice cruise its route is carefully charted in advance and left behind, but if an accident occurs en route the shore stations have no means of knowing it until the “sub” becomes overdue—unless, as was the case with the two “S” boats lost in recent years the Atlantic coast, the accident is a collision with a surface craft.

If means could be developed to release a radio mast and supporting buoy from the sea bottom the submarine crew would have an invaluable safety device.

This submarine broadcast stunt was another development in the linking of short wave wireless with the re-broadcast facilities of the great radio chain systems. Because of their light weight and ability to cover great distances with minimum power, short wave broadcast sets can be carried to most any place where there is an event to be covered, and where the usual telephone line connections to the broadcast studio are impossible.

It was by this means that an announcer in a diving suit walked about the bottom of the sea a few months ago and described his sensations and experiences. A short wave set made it possible for a parachute jumper to leap from a plane, carrying a tiny transmitter, and talk to millions of listeners as he floated down to earth. During the refueling endurance flights last summer short wave sets were placed in refueling ships and microphones lowered at regular intervals to the flyers, who carried on two way conversations, being interviewed by the broadcast announcers on the ground, the vast invisible radio audience hearing both sides of the interview.

Novelty in broadcasting stunts gains in favor, as is indicated by the national broadcast conducted by Screen Play Magazine. A number of famous film celebrities gathered on the Leviathan and the entertainers in the party broadcast their offering from the ship to the New York Studios of the National Broadcasting Company, from which the broadcast was sent out over the national hookup from coast to coast.

This unusual broadcast invited readers of Screen Play Magazine to enter a song writing contest, and thousands of entries were received.

Recently, roaming radio stations have sprung into vogue. Statistics show that there are now over 1,000 perambulating broadcasting outfits doing service in various fields of endeavor and enterprise. Mining and oil concerns are making great use of these portable stations in the south-eastern states, transporting them from place to place where the quest for oil or minerals is carried on.

Among the many uses to which this short wave apparatus has been adapted are aviation and television experiments, emergency communications along power lines, the directing of motion pictures. Several universities are making use of them for field operations.

These stations are for the most part licensed for restricted periods in the so-called mobile band of 1,600 to 3,000 kilocycles. Herbert Hoover, Jr. is an ardent experimenter with this type of station. He has several, one of them being of 1,000 watts. In the course of his work for the Western Air Express he often sets one of these portable stations up in his hotel room to communicate with his home office.