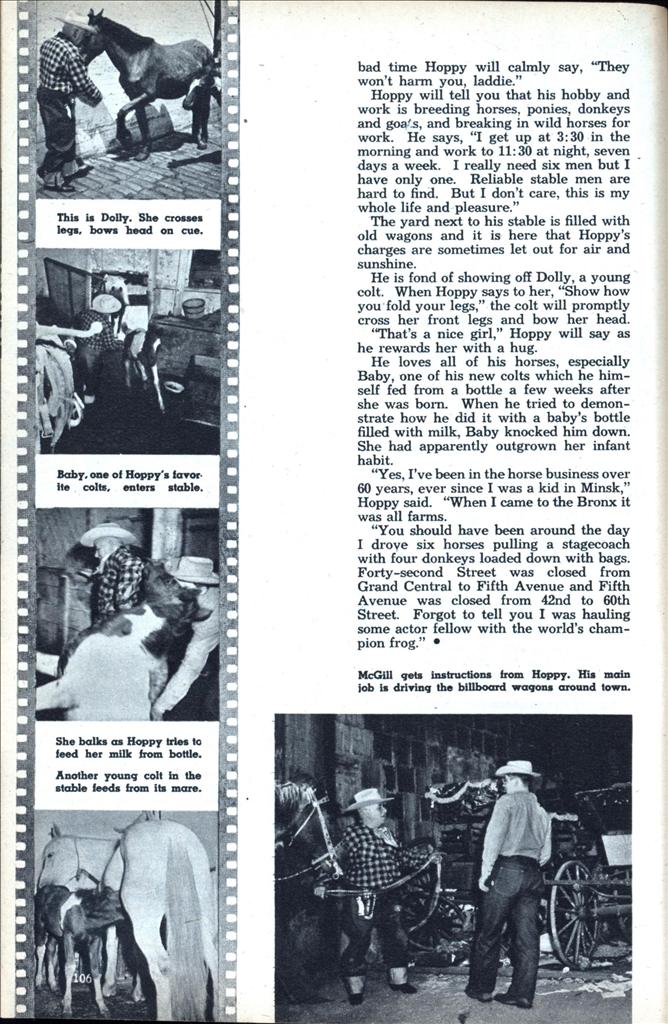 Hoppy, who is usually gaily decked out in a checkered shirt and rolled-up blue dungarees, complete with ten- gallon hat, six-shooter and briefcase, works 20 hours a day taking care of his stock. He rents out his horses and wagons to peddlers but his greatest income is derived from the hundreds of period horse-drawn wagons which are used for promotional parades and on TV. Hoppy began collecting them back in 1910.

One of the stagecoaches Hoppy keeps in his newly-painted stable rates pretty high with the Bronx Bronco Buster. As he puts it, “I wouldn’t take $5,000 for that stage today. It’s one of 64 pieces I bought from an estate that once stood where the Waldorf-Astoria is today. Yep, I got carriages, covered wagons, coaches and even a small trolley. Got them stored in five warehouses. Don’t mind the looks of the stagecoach, lately it was on the Motorola TV hour and they sprayed it with paint to make it look as if it had been through the desert. They even lathered my horses to make them look as if they’d been running hard.”

A visit to Hoppy’s breeding stable is an eye-opener. He usually travels there by stagecoach with his helper, Buster McGill, who is an expert rider aside from his job of driving Hoppy’s billboard wagons around town.

It’s usually quite a procession that files through the Bronx streets to Hopalong Abramowitz’s stable at 144th Street under the old Third Avenue El. The neighborhood kids trail him on foot and bike to see what is going on and since Hoppy is a well-known figure, nearly everyone has a friendly greeting for him as he clatters merrily along aboard his stage.

The stable for breeding horses is in an ancient brick building with old wooden doors that are very much in need of repairs and is filled with all sizes and shapes . of Hoppy’s four-footed animals. Upon entering, a visitor may be scared to death that he’ll be caught in a stampede for the herd will sometimes begin to roll and kick and bite each other and the prancing goats seem to have the run of the place.

When you finally think you are in for a bad time Hoppy will calmly say, “They won’t harm you, laddie.”

Hoppy will tell you that his hobby and work is breeding horses, ponies, donkeys and goats, and breaking in wild horses for work. He says, “I get up at 3:30 in the morning and work to 11:30 at night, seven days a week. I really need six men but I have only one. Reliable stable men are hard to find. But I don’t care, this is my whole life and pleasure.”

The yard next to his stable is filled with old wagons and it is here that Hoppy’s charges are sometimes let out for air and sunshine.

He is fond of showing off Dolly, a young colt. When Hoppy says to her, “Show how you fold your legs,” the colt will promptly cross her front legs and bow her head.

“That’s a nice girl,” Hoppy will say as he rewards her with a hug.

He loves all of his horses, especially Baby, one of his new colts which he himself fed from a bottle a few weeks after she was bom. When he tried to demonstrate how he did it with a baby’s bottle filled with milk, Baby knocked him down. She had apparently outgrown her infant habit.

“Yes, I’ve been in the horse business over 60 years, ever since I was a kid in Minsk,” Hoppy said. “When I came to the Bronx it was all farms.

“You should have been around the day I drove six horses pulling a stagecoach with four donkeys loaded down with bags. Forty-second Street was closed from Grand Central to Fifth Avenue and Fifth Avenue was closed from 42nd to 60th Street. Forgot to tell you I was hauling some actor fellow with the world’s champion frog.” •