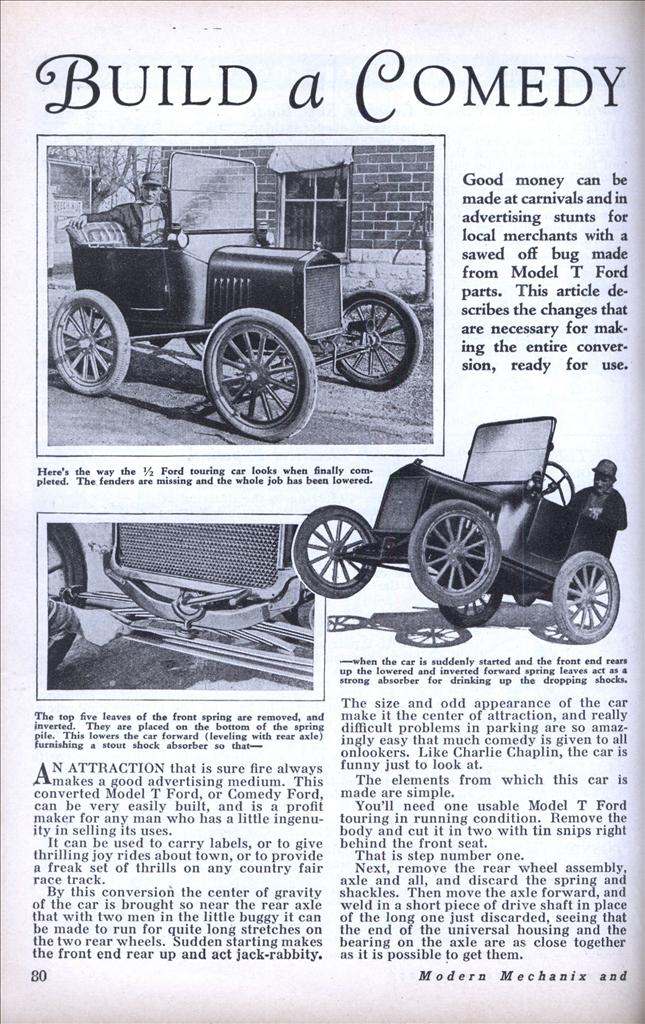 Good money can be made at carnivals and in advertising stunts for local merchants with a sawed off bug made from Model T Ford parts. This article describes the changes that are necessary for making the entire conversion, ready for use.

AN ATTRACTION that is sure fire always makes a good advertising medium. This converted Model T Ford, or Comedy Ford, can be very easily built, and is a profit maker for any man who has a little ingenuity in selling its uses.

It can be used to carry labels, or to give thrilling joy rides about town, or to provide a freak set of thrills on any country fair race track.

By this conversion the center of gravity of the car is brought so near the rear axle that with two men in the little buggy it can be made to run for quite long stretches on the two rear wheels. Sudden starting makes the front end rear up and act jack-rabbity.

The size and odd appearance of the car make it the center of attraction, and really difficult problems in parking are so amazingly easy that much comedy is given to all onlookers. Like Charlie Chaplin, the car is funny just to look at.

The elements from which this car is made are simple.

You’ll need one usable Model T Ford touring in running condition. Remove the body and cut it in two with tin snips right behind the front seat.

That is step number one.

Next, remove the rear wheel assembly, axle and all, and discard the spring and shackles. Then move the axle forward, and weld in a short piece of drive shaft in place of the long one just discarded, seeing that the end of the universal housing and the bearing on the axle are as close together as it is possible to get them.

Pillow blocks of 2″ by 4″ stock are placed between the frame and the axle on both sides of the frame, and long U bolts of 1/2″ cold rolled steel are bent and threaded and a clip plate fashioned so that the axle may be bolted to the frame.

Then the frame is hack sawn off right “abaft” the hold down bolt holes for the body.

The radius rods are separated and the ends welded to the sides of the frames.

That completes the rear end.

The front end is very simple, needing but few changes. The main idea is to get the whole frame lowered so that it is more on line with the springless rear wheels. Since the rear wheels are now carrying more of the load than the front, the spring forward can be much less strong and still be plenty heavy. The first five top leaves are removed and inverted, and then placed in the bottom of the spring pile. Thus when the car smacks down to earth after one of its spectacular “rarin’s,” this inverted spring cushions the shock.

The exhaust is led out through an extension of flexible metal hose.

The body is put on, and bolted down.

The matter of marketing the services of the car is not difficult.

A call to local merchants will soon show you what they are willing to pay for a sign of a comic nature on your car, and by changing the car’s literary cargo each week, you will keep the turnover steady.

A matter of giving “jitney” rides is a simple affair in most cities. Put a sign on the car, 5c a ride, and show it doing some of its bucking tricks. Several dollars a day can be earned in an active, well populated community.

County fair concessions can be ascertained by writing the state bureau at your state capital, through the secretary of state.