It seems like having to have a belt drive connect both the transmitter and receiver might be a bit of a limitation, but this is still pretty neat. I wonder what the results looked like? 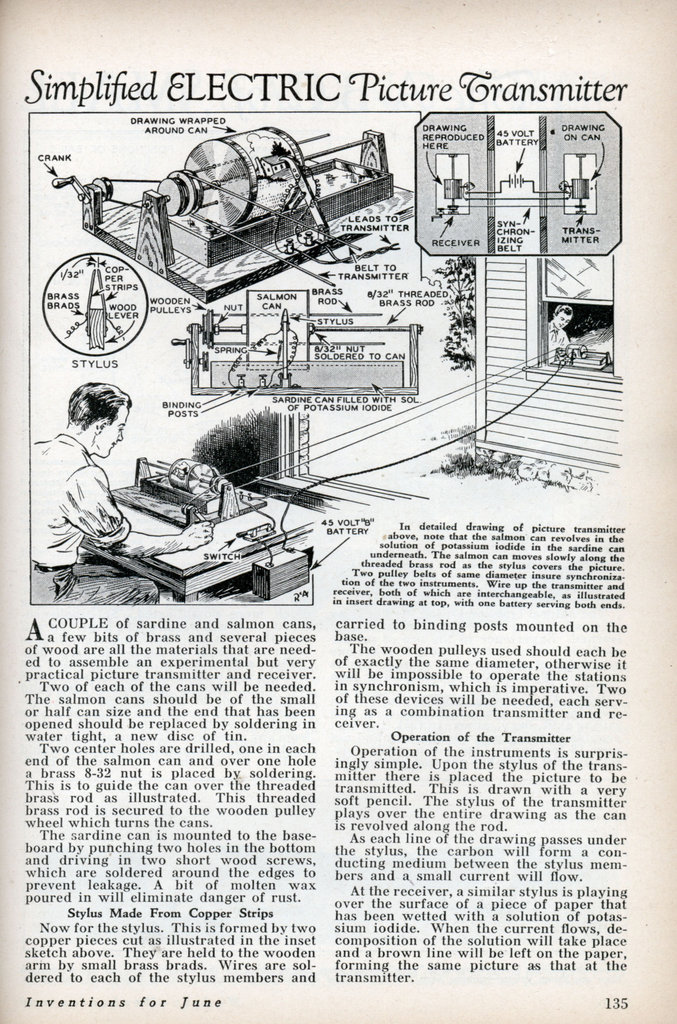 A COUPLE of sardine and salmon cans, a few bits of brass and several pieces of wood are all the materials that are needed to assemble an experimental but very practical picture transmitter and receiver.

Two of each of the cans will be needed. The salmon cans should be of the small or half can size and the end that has been opened should be replaced by soldering in water tight, a new disc of tin.

Two center holes are drilled, one in each end of the salmon can and over one hole a brass 8-32 nut is placed by soldering. This is to guide the can over the threaded brass rod as illustrated. This threaded brass rod is secured to the wooden pulley wheel which turns the cans.

The sardine can is mounted to the baseboard by punching two holes in the bottom and driving in two short wood screws, which are soldered around the edges to prevent leakage. A bit of molten wax poured in will eliminate danger of rust.

Stylus Made From Copper Strips

Now for the stylus. This is formed by two copper pieces cut as illustrated in the inset sketch above. They are held to the wooden arm by small brass brads. Wires are soldered to each of the stylus members and carried to binding posts mounted on the base.

The wooden pulleys used should each be of exactly the same diameter, otherwise it will be impossible to operate the stations in synchronism, which is imperative. Two of these devices will be needed, each serving as a combination transmitter and receiver.

Operation of the Transmitter

As each line of the drawing passes under the stylus, the carbon will form a conducting medium between the stylus members and a small current will flow.

At the receiver, a similar stylus is playing over the surface of a piece of paper that has been wetted with a solution of potassium iodide. When the current flows, decomposition of the solution will take place and a brown line will be left on the paper, forming the same picture as that at the transmitter.