Where would you even use a homemade bobsled? 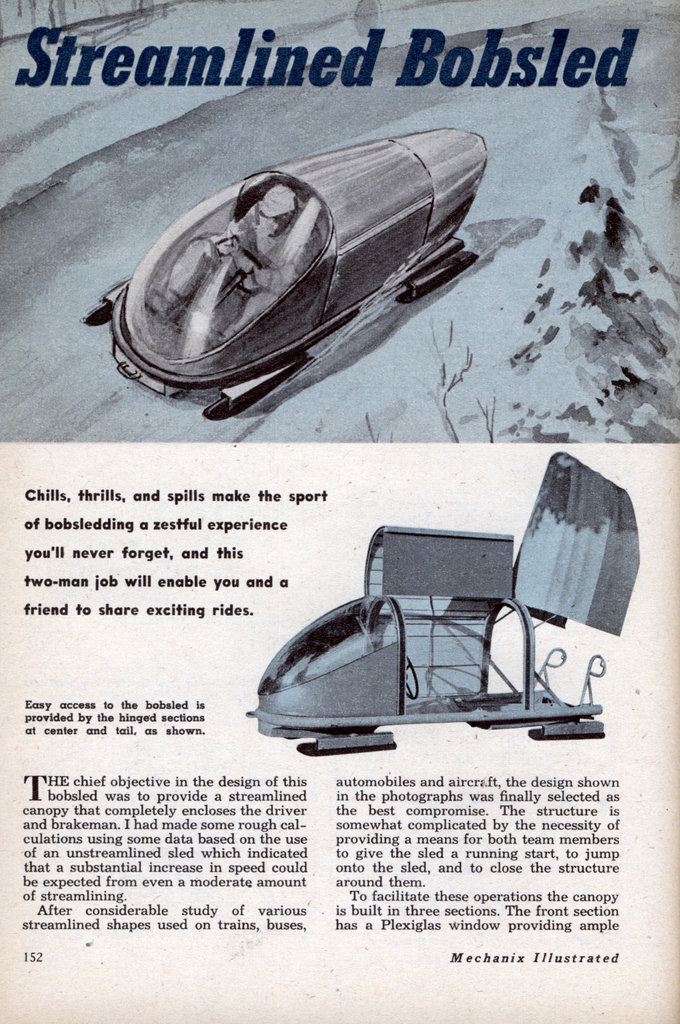 Chills, thrills, and spills make the sport of bobsledding a zestful experience you’ll never forget, and this two-man job will enable you and a friend to share exciting rides.

THE chief objective in the design of this bobsled was to provide a streamlined canopy that completely encloses the driver and brakeman. I had made some rough calculations using some data based on the use of an unstreamlined sled which indicated that a substantial increase in speed could be expected from even a moderate amount of streamlining.

After considerable study of various streamlined shapes used on trains, buses, automobiles and aircraft, the design shown in the photographs was finally selected as the best compromise. The structure is somewhat complicated by the necessity of providing a means for both team members to give the sled a running start, to jump onto the sled, and to close the structure around them.

To facilitate these operations the canopy is built in three sections. The front section has a Plexiglas Window providing ample vision for the driver. The center section has a double-hinged hatch which slides up and down to permit the driver to jump into the interior and close the hatch with one hand while steering the sled with the other. The rear section hinges upward to permit the brakeman to jump aboard after the starting push and then lower it into position.

Two U-shaped overhead members made from l-1/2×3-in. aluminum channel support the two hatches. They are strong enough to provide protection for the riders in case the sled rolls over. Fortunately, this feature has never received an operational test. The sections of the canopy are constructed from aluminum tubing angle-formed to the proper shape and brazed together. The frames are covered with aircraft fabric and doped in the usual manner. The Plexiglas window was formed from a large sheet of 3/16-in. thickness, supplied by the Rohm & Haas Co., Philadelphia, Pa.

When a sled enters a sharp, highly-banked turn, the frame of the sled must twist in order to permit all four runners to remain in contact with the ice. This is ordinarily accomplished by providing considerable flexibility in the frame. Since a rigid frame fabricated from three-inch steel tubing is used with this sled to simplify the construction of the canopy, the twisting action is provided by mounting the rear axle on an angle-iron frame which is connected to the main frame by two bolts, forming a longitudinal bearing. This rear frame also carries the brakeman. This structure distributes the weight of the sled and riders uniformly on all four runners at all times.

The front axle is supported on a large roller bearing to provide easy steering. The photograph and drawing of the steering mechanism, which consist of a pulley and cable, is self-explanatory. It is covered by an aluminum pan to provide underside streamlining, as shown in the photos.

The runners are supported in aluminum castings which are mounted on the axles by bearings to permit the runners to rock independently so as to follow the contour of the ice. Each runner blade is carried by four rubber shock-mounts designed for the purpose (see drawing). The rubber mount has a maximum deflection of 1/2 in. and behaves like a well damped spring suspension. This feature provides a very smooth ride and should reduce the energy loss when the runner encounters rough ice and ruts. The runner blades are made from 8mm steel and have a half-round running surface as called for by racing regulations.

There are very few limitations on sled design specified in the rule book. For a two-man bobsled they are:
Runner separationâ€”67cm
Runner edgeâ€”half-round with a minimum radius of 4mm
Overall lengthâ€”275cm maximum from tip to tip of the runners

Weight of sledâ€”165 Kg maximum It was gratifying to find that the speed of the sled increased approximately as I had calculated. I haven’t let it go full out yet without using the brakes. However, even then it was faster than other sleds running without brakes.â€”John Dunkin â€¢