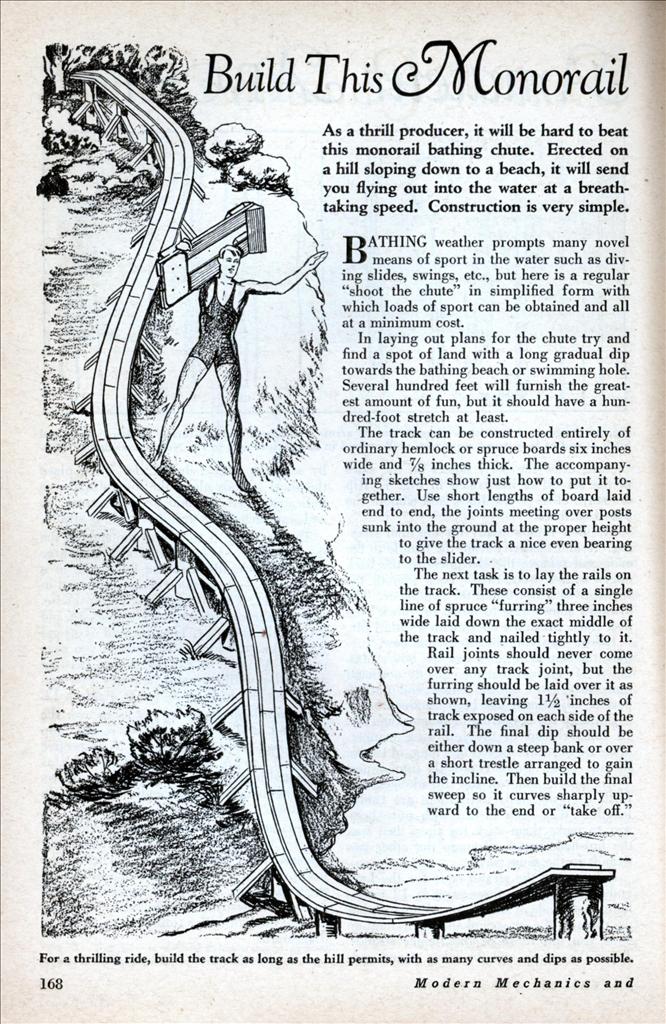 As a thrill producer, it will be hard to beat this monorail bathing chute. Erected on a hill sloping down to a beach, it will send you flying out into the water at a breathtaking speed. Construction is very simple.

BATHING weather prompts many novel means of sport in the water such as diving slides, swings, etc., but here is a regular “shoot the chute” in simplified form with which loads of sport can be obtained and all at a minimum cost.

In laying out plans for the chute try and find a spot of land with a long gradual dip towards the bathing beach or swimming hole. Several hundred feet will furnish the greatest amount of fun, but it should have a hundred-foot stretch at least.

The track can be constructed entirely of ordinary hemlock or spruce boards six inches wide and 7/8 inches thick. The accompanying sketches show just how to put it together. Use short lengths of board laid end to end, the joints meeting over posts sunk into the ground at the proper height to give the track a nice even bearing to the slider.

The next task is to lay the rails on the track. These consist of a single line of spruce “furring” three inches wide laid down the exact middle of the track and nailed tightly to it. Rail joints should never come over any track joint, but the furring should be laid over it as shown, leaving l-1/2 inches of track exposed on each side of the rail. The final dip should be either down a steep bank or over a short trestle arranged to gain the incline. Then build the final sweep so it curves sharply upward to the end or “take off.”

The slider is very easy to construct. Cut off two pieces of three-inch furring 3 ft. 6 in. long and lay parallel 3-1/2 in. apart. Connect the front end by a piece of 4×4 timber 15 in. long split diagonally down its length as illustrated. Then connect the rear ends of the parallel strips by a board 12 in. square for the seat. On top of this fasten a cushion made of heavy canvas and stuffed with ground cork taken from a grape keg. Two handles are arranged as shown.

Turn the slider over and then attach four hard wood blocks to the under side of the parallel strips as shown, two at the front and two near the rear end. Set them back slightly from the inside edges and fasten with long screws driven in from the top. Then shoe each block with smooth iron, countersinking all screw heads. When completed, give all but the cushion and iron runners several coats of good paint. Then attach a piece of sheet steel under the footrest and curve it slightly to act as a guard to ride over any protruding joints of the track.

Now go over the track thoroughly, driving down any projecting nailheads and smoothing off knots, slivers, or any projections that might cause interference. Give the entire structure two or three coats of linseed oil, and after it is dry wipe the entire surface of track and rail with candle stubs. This lubricates the wood and increases the sliding qualities. Shine off the runners of the slider with fine emery paper to make them smooth and then treat the under surfaces with paraffine.