This is apparently the second article in the Modern Mechanix series: “How to kill yourself underwater”. The first being Build Your Own Diving Helmet.

They are seriously talking about getting in this thing and being towed 15-30mph at a depth of at least 30 feet. But don’t worry because “The air inside the boat will be sufficient for approximately half an hour’s stay under water”. 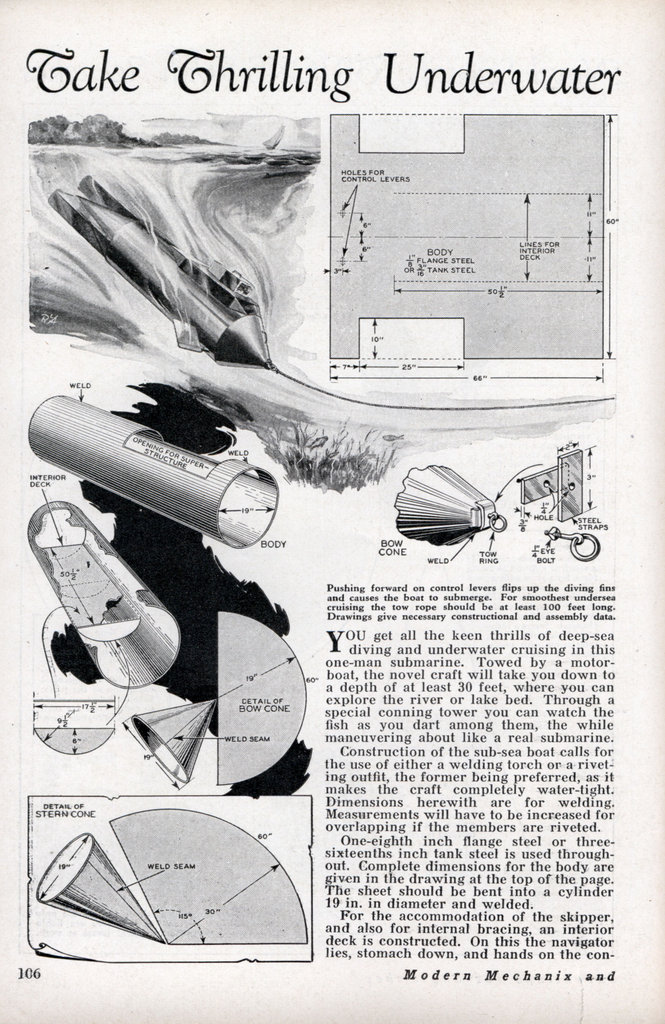 YOU get all the keen thrills of deep-sea diving and underwater cruising in this one-man submarine. Towed by a motor-boat, the novel craft will take you down to a depth of at least 30 feet, where you can explore the river or lake bed. Through a special conning tower you can watch the fish as you dart among them, the while maneuvering about like a real submarine.

Construction of the sub-sea boat calls for the use of either a welding torch or a riveting outfit, the former being preferred, as it makes the craft completely water-tight. Dimensions herewith are for welding. Measurements will have to be increased for overlapping if the members are riveted.

One-eighth inch flange steel or three-sixteenths inch tank steel is used throughout. Complete dimensions for the body are given in the drawing at the top of the page. The sheet should be bent into a cylinder 19 in. in diameter and welded.

For the accommodation of the skipper, and also for internal bracing, an interior deck is constructed. On this the navigator lies, stomach down, and hands on the control lever, as demonstrated in an accompanying drawing. The deck end pieces are welded in place, as is the deck itself.

All other necessary dimensions are given in the accompanying drawing. The construction of the conning tower lid, however, calls for comment. Note that the “lid” is equipped with a strip of rubber which renders the sub air-tight when the conning tower is tightened down. Take particular pains here to get a good, water-tight fit.

A point that has to be determined separately for each individual case is that of buoyancy. This depends partly on the weight of the materials, and partly on that of the operator. The floating buoyancy may be lowered by boring numerous holes in the bottom of the hull below the interior deck, the effect of these being to give the craft a water ballast.

The submerged buoyancy may be lowered considerably by boring holes in the stream-line portions of the superstructure. If this is not sufficient, molten lead may be poured into the cones, and weights may be welded onto the lower portion of the bow cone and the lower stabilizing fins at the stern.

From the tow ring a rope at least 100 feet long should be run to the towing craft, and the deeper one intends to descend, the longer should be this rope in order that the pull shall be as nearly horizontal as possible.

Care should be taken not to submerge too suddenly. From a surface speed of 30 miles, the craft will check to about 15 when submerged, and the shock of this transition should be spread over as much time as possible.

The air inside the boat will be sufficient for approximately half an hour’s stay under water. For safety’s sake it is well to have an oxygen tank as part of the equipment, and this can be attached just inside the bow cone within easy reach of the operator.