If you are thinking of making this, keep in mind that 21 new elements have been discovered since it was printed. You can find out more at http://www.webelements….. 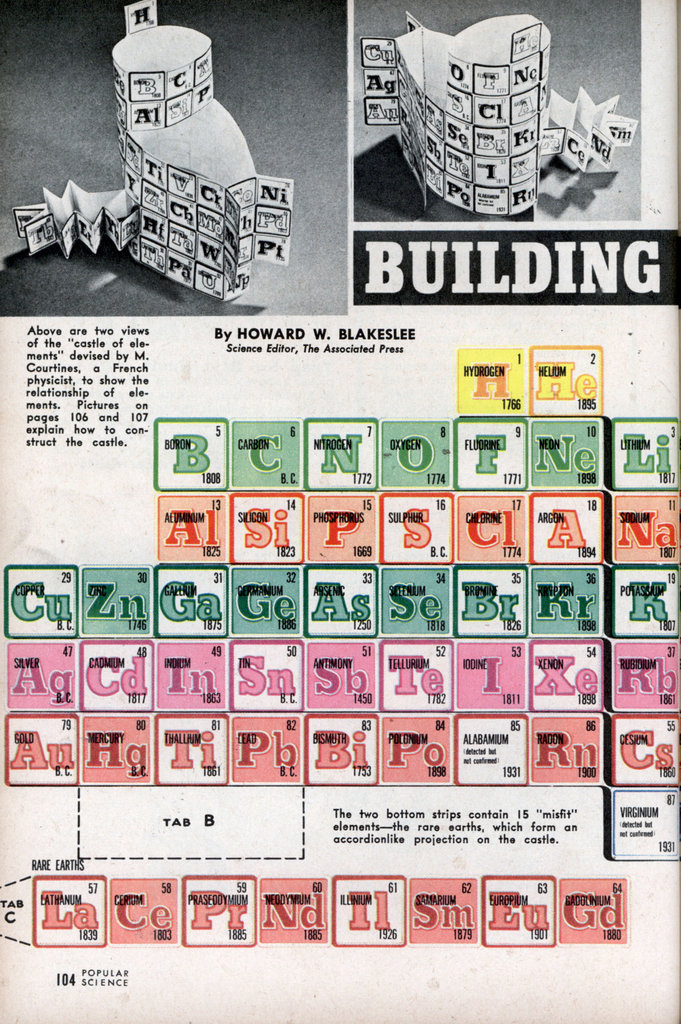 THE periodic table of the elementsâ€”the 96 metals, nonmetals and gases that form everything in the material universeâ€” is the blueprint of the atomic future.

This table states a very simple fact: Everything material is made of three kinds of particles; namely, neutrons, protons and electrons. The difference between any two elements, iron and oxygen, for example, is in the number of particles.

On a map, specific places are always at specific points. The periodic table is like that. It tells facts about the elements that never change.

Although the table does not show where to look for uranium, it indicates the likely mineral formations. It shows that the kind of chain reaction that makes uranium bombs cannot be achieved without uranium’s aid. It also gives the limits of the uranium reaction and guarantees that it will not explode the earth.

The periodic table points the way to some yet-unachieved human desires. One of these is atomic energy from less costly materials and suited to industrial uses. The table shows that uranium lies in an atom-splitting range. Already the periodic indicators point to another range where unknown atomic energies may be gained by a new process.

The table predicts metals, now nonexistent, that may be produced by transmutation. In fact, its guidance already has produced synthetic metals not known to exist anywhere else in creation.

The table describes the basic physical structure of everything, whether molecule, man, or star, with man at the midpoint in this trio. How can the three little particles on which the table is based tell so much? The answer is in their rhythmic organization into the units called atoms.

Every atom has two sections. One is a center, or nucleus, composed of a knot of neutrons and protons (except hydrogen, whose nucleus is a single proton). The other is a shell, or a series of shells, surrounding this center. There are never more than seven shells, and they are not material, merely zones in which electrons cir- culate in orbits around the nucleus. There are never more than 32 electrons in one zone. They travel hundreds of thousands of miles an hour in their orbits. All atoms are about the same size, the heavier ones merely being more concentrated.

This picture is not guesswork; it is drawn by X-rays and other tools, but it has taken nearly 200 years to fill it in. The first clues were found by using ordinary scales. The early chemists weighed elements and compounds with utmost care, as if realizing that they were dealing with something built of units too small to see. These dimly sensed particles seemed always to be units, never fractions of a unit. More than one chemist said that the compounds behaved like the octaves of a musical scale.

One of the first to interpret the story of the scales was Antoine L. Lavoisier, a French chemist. In 1774, he pointed out that the total weight of elements was never changed by chemical reactions.

Five years later another French chemist, Louis J. Proust, observed that the proportions of each element in a compound never changed, no matter how it was prepared.

In 1808, in England, the first explanation of the numbers puzzle was offered by John Dalton, son of a weaver. He said the unseen units must be atoms, the ultimate particles of matter conceived by a Greek philosopher, Democritus, 2,200 years before. Dalton argued that atoms had to exist to explain the rhythmic way in which a fixed amount of one element always combined with a definite amount of another.

But a different sort of rhythm finally disclosed the periodic table, in 1869, to Dimitri Mendeleyev, Russian chemist and teacher. The rhythm he saw was valence, which means the combining capacity of an atomâ€”its ability to hold or displace other atoms in a compoundâ€”measured in multiples of the hydrogen atom, which has the weight of one unit. More simply, valence is the affinity of one element for others.

The Rule of Eight

Mendeleyev arranged the elements by weight, in ascending steps starting with hydrogen, and an astonishing fact became apparent. A rule of eight was at work. Each eighth element, up the scale, had similar affinities. Lithium, for example, is number three in the table. Eight steps up is element 11, sulphur. It has the same valence as lithium. Up eight more steps is element 19, potassium, which again combines like lithium and sulphur. Mendeleyev found eight of these families, each with its own distinctive valence. He then wrote the periodic table classifying these families by weight. The weight differences were fairly regular, but there were gaps. Mendeleyev reasoned that the gaps represented missing elements, and boldly counted the empty spaces as if they existed. He predicted that elements would be found in three of them, and within 17 years all three predictions came true. Since then, all the missing elements but two have been found, and these two have been reported.

The periodic table has been much improved. Today it is known that there are exceptions to the rule of eight, and that as elements become heavier, the interval is likely to be greater. But Mendeleyev’s eight families are still there. The reason for the families is in their outer shells of electrons. These outer electrons do the amalgamating when one atom joins a different kind of atom to form a compound. They are the valence electrons; each family has a different number of them. Mendeleyev’s lithium family, the alkali group, has one. Group two, the alkaline earths, has two. And so on, up to eight.

There are other groupings based on electron behavior. One group, the rare earths, reverses ordinary atomic procedure. Usually an atom taking on an added electron places it outside. Not the rare earths; they put the new electron in an inside shell.

The periodicity of electrons is now perfect. Their numbers, in each atom, run without a break in sequence from one, for hydrogen, to 96, for the newly synthesized heaviest atom, curium.

The atomic weights rise in rhythmic progression. The building units are neutrons and protons, virtually equal in weight.

Electrons do not count, being almost weightless. The atom weights usually rise by two or three units for each step, although there are exceptions. Add one unit to an atom, and it is either transmuted to a different element or to an isotope of the same element. An isotope has the same chemical properties as the basic element, but a different weight.

This precise chemical similarity is now challenged, however, and the challenge carries vast possibilities. Thanks to the periodic rhythm of weights, scientists can make many isotopes and have already synthesized about 500. By the same periodic rhythm, they are making entirely new elements, all to date being heavy metals. With atomic ovens for transmutation chambers, there is no limit now in sight for this synthesis. The ovens have made two dozen new isotopes and some new elements. For the first time, elements have been synthesized in visible amounts.

The previously mentioned exceptions in the rhythm of atomic weights are caused partly by another rhythm, that of energy itself. Atomic units lose a slight fraction of their mass when they join up to form a new atom. This lost mass changes into energy, used in welding the new atom.

Where Future Energy May Lie

Conversely, a similar amount of energy is required to break the same atom, and it is by this breaking that atomic energy of the future may be gained. The energy rhythm shows itself in a wave that covers the periodic table from end to end. All the middleweight atoms require more energy to break than the light or heavy atoms at either end of the table. This wave is a smooth curve, its hump in the middle.

For this reason, scientists knew that the most likely place to get nuclear energies was at one end of the table or the other â€”and that was where they got the energy first: in uranium, element 92, then the heaviest known atom.

The energy rhythm tells still more. It says that all the heaviest elements should be radioactive, slowly decaying toward lead. Actually, everything heavier than element 83, bismuth, is radioactive.

Finally, the table shows that millions of years ago there existed on earth elements, heavier than any now known, that decayed into present elements. The periodic table indicates how man may synthesize some of these lost elements. While man advances toward new sources of energy, his atomic blueprint can also turn back the pages to the earth’s vanished past.