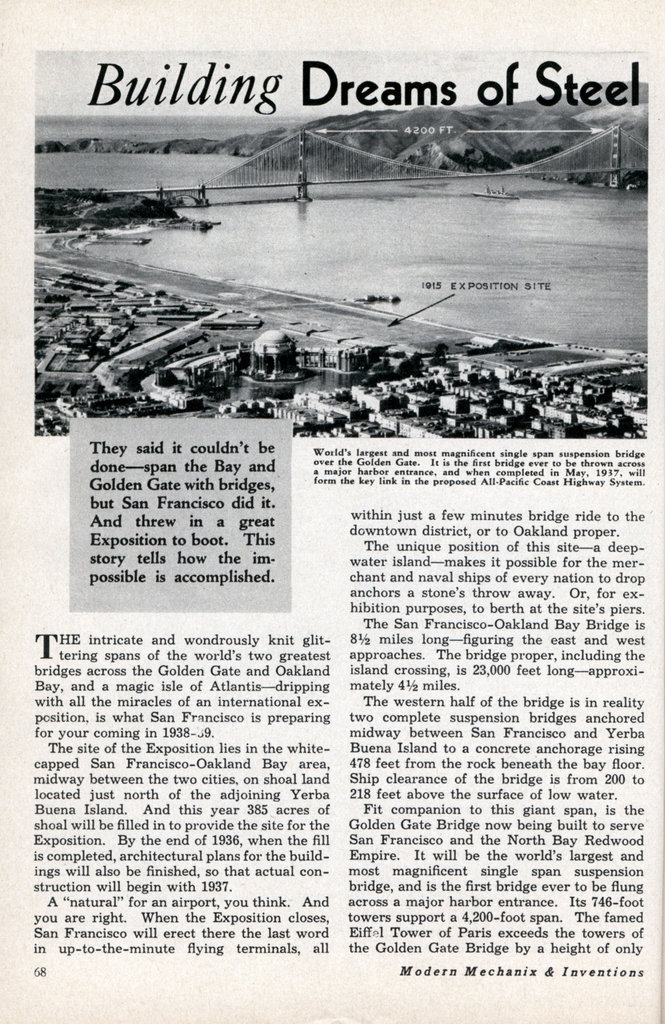 They said it couldn’t be doneâ€”span the Bay and Golden Gate with bridges, but San Francisco did it And threw in a great Exposition to boot. This story tells how the impossible is accomplished.

THE intricate and wondrously knit glittering spans of the world’s two greatest bridges across the Golden Gate and Oakland Bay, and a magic isle of Atlantisâ€”dripping with all the miracles of an international exposition, is what San Francisco is preparing for your coming in 1938-39.

The site of the Exposition lies in the white-capped San Francisco-Oakland Bay area, midway between the two cities, on shoal land located just north of the adjoining Yerba Buena Island. And this year 385 acres of shoal will be filled in to provide the site for the Exposition. By the end of 1936, when the fill is completed, architectural plans for the buildings will also be finished, so that actual construction will begin with 1937.

A “natural” for an airport, you think. And you are right. When the Exposition closes, San Francisco will erect there the last word in up-to-the-minute flying terminals, all within just a few minutes bridge ride to the downtown district, or to Oakland proper.

The unique position of this siteâ€”a deep-water islandâ€”makes it possible for the merchant and naval ships of every nation to drop anchors a stone’s throw away. Or, for exhibition purposes, to berth at the site’s piers.

The San Francisco-Oakland Bay Bridge is 8-1/2 miles longâ€”figuring the east and west approaches. The bridge proper, including the island crossing, is 23,000 feet longâ€”approximately 4-1/2 miles.

The western half of the bridge is in reality two complete suspension bridges anchored midway between San Francisco and Yerba Buena Island to a concrete anchorage rising 478 feet from the rock beneath the bay floor. Ship clearance of the bridge is from 200 to 218 feet above the surface of low water.

Fit companion to this giant span, is the Golden Gate Bridge now being built to serve San Francisco and the North Bay Redwood Empire. It will be the world’s largest and most magnificent single span suspension bridge, and is the first bridge ever to be flung across a major harbor entrance. Its 746-foot towers support a 4,200-foot span. The famed Eiffel Tower of Paris exceeds the towers of the Golden Gate Bridge by a height of only 239 feet. Or, to get nearer home for comparisons, the bridge towers are 191 feet taller than the Washington Monument. Thus, then are two mammoth bridges, where one alone might serve. But California always does things in a great big way.

The Oakland commuter today rides on 20-mile-an-hour trolleys to the ferry moles, then spends 20 more minutes ferrying to San Francisco, after which he climbs aboard another trolley to ride uptown to business. Or he comes in on the Sausalito Ferry from the North Bay Redwood Empire, losing even more valuable time.

But under special safety control from a point in Emeryville, the Oakland commuter will soon scoot in subway-type trains at 60 miles an hour to a central San Francisco terminal loop, close to his work, thereby cutting his hours of commutation travel more than half.

The San Francisco-Oakland Bay Bridge riggers are engaged in erecting the longest bridge arms ever attempted by cantilevering â€”literally pushing steel out into thin air.

The two arms (see illustration) are now a little more than 400 feet long, which means they are rapidly reaching the danger point.

If nothing goes wrong the connection will be made in a little over a month, but right now the bridge men have their fingers crossed. On top of this comes another problemâ€”that of stretching out thousands of tons of steel into space so that the “sag” due to gravity will be equalized. You and I think these great arms are being built parallel to the water, but we are wrong. They are tilted so that the outward ends of the bridge are about four feet higher than the level at the starting piers. In other words, the “sag” has been so calculated that the enormous weight of the free-floating steel bends it downward, and thus the two bridge sections will eventually join without a detectable difference in plane.

What could be more wonderful than to commemorate the completion of these two great bridges with an International Exposition?

For the Exposition will be international in scope. Its theme will be modern developments in transportation and communication as symbolized by the bridges, by the transoceanic air service and the progress of radio.