BUILDING IS MODELED AS BIRTHDAY CAKE (May, 1929)

I remember this building from when I lived in Minneapolis. It was built by Wilber Foshay, a utility magnate who was later convicted for running a pyramid scheme. Check out the Wikipedia entry for an interesting story about its dedication celebration. Apparently Foshay hired John Philip Sousa compose a march for the occasion but it was only played that one time because his check to Sousa bounced. It wasn’t until some investors in Minnesota paid his bill that it was heard again.

It seems like every time I read about Sousa it has something to with copyright or music piracy. 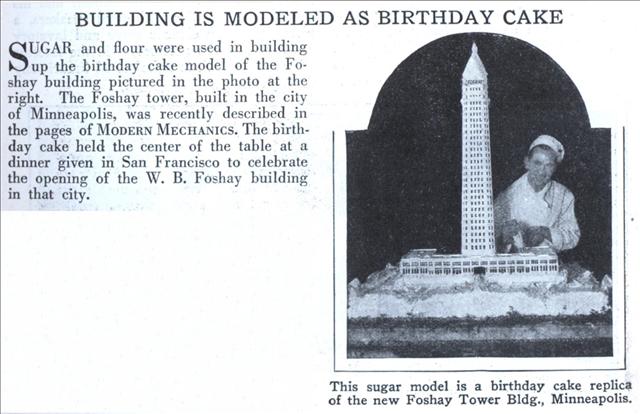 BUILDING IS MODELED AS BIRTHDAY CAKE

SUGAR and flour were used in building up the birthday cake model of the Foshay building pictured in the photo at the right. The Foshay tower, built in the city of Minneapolis, was recently described in the pages of Modern Mechanics. The birthday cake held the center of the table at a dinner given in San Francisco to celebrate the opening of the W. B. Foshay building in that city.