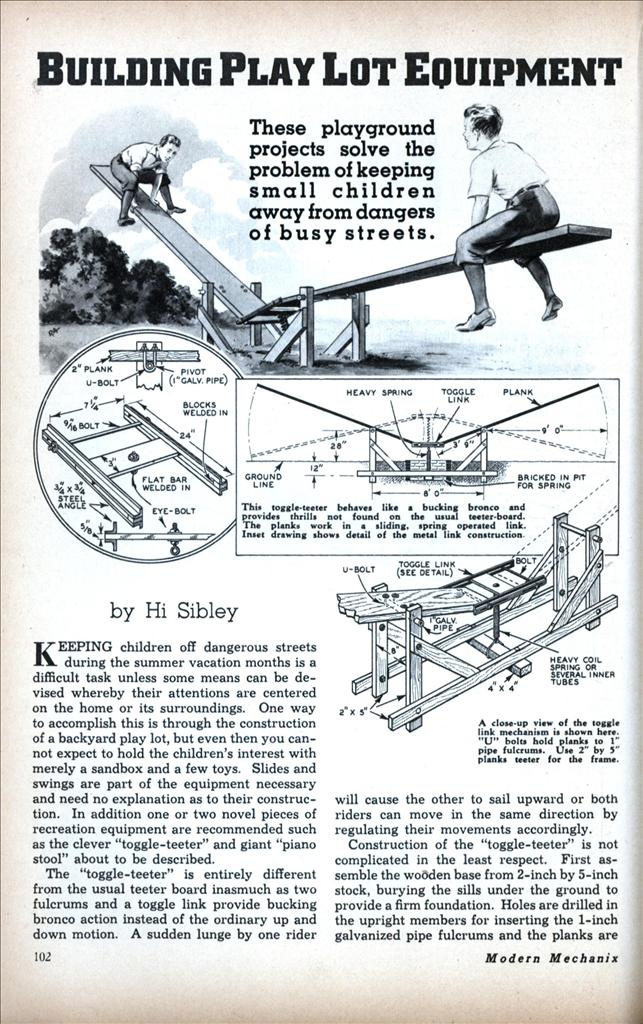 These playground projects solve the problem of keeping small children away from dangers of busy streets.

KEEPING children off dangerous streets during the summer vacation months is a difficult task unless some means can be devised whereby their attentions are centered on the home or its surroundings. One way to accomplish this is through the construction of a backyard play lot, but even then you cannot expect to hold the children’s interest with merely a sandbox and a few toys. Slides and swings are part of the equipment necessary and need no explanation as to their construction. In addition one or two novel pieces of recreation equipment are recommended such as the clever “toggle-teeter” and giant “piano stool” about to be described.

The “toggle-teeter” is entirely different from the usual teeter board inasmuch as two fulcrums and a toggle link provide bucking bronco action instead of the ordinary up and down motion. A sudden lunge by one rider will cause the other to sail upward or both riders can move in the same direction by regulating their movements accordingly.

Construction of the “toggle-teeter” is not complicated in the least respect. First assemble the wooden base from 2-inch by 5-inch stock, burying the sills under the ground to provide a firm foundation. Holes are drilled in the upright members for inserting the 1-inch galvanized pipe fulcrums and the planks are then clamped in position with “U” bolts. The planks each measure 12 feet, 9 inches in length and 7 inches in width. The plank stock is 2 inches thick with a hole large enough to pass the 9/16″ link bolt drilled in one end of each plank. The “U” bolts are inserted at a point 3 feet, 9 inches from the ends through which the link bolts will pass.

Make the toggle link from angle iron to the size and shape indicated in the link detail diagram. Spacer blocks welded in each end of the angle iron runners permit the long 9/16-inch bolts to slide back and forth freely in the link so as to provide the unique teeter action. A heavy steel plate welded in the center of the angle iron runners forms an anchor for the heavy coil spring providing the teeter’s momentum. The spring is drawn rigid and anchored to a 4-inch by 4-inch cross-piece under the base. If a spring of sufficient tension is not available inner tubing can be substituted with equal results.

A brick lined well directly under the center of the teeter assembly permits spring repairs or replacing of inner tubing when necessary. To protect it from the weather and add to its appearance the teeter should be enameled or painted in bright colors.

Most all small children are fascinated by revolving stools, whether in front of a piano or in a drug store, and like to climb aboard and spin around on them. A giant “piano stool” for the play lot is easy to make and will furnish the tiny tots with plenty of harmless thrills.

The top of the stool is a 3-foot plywood disc, % inch in diameter, mounted on a steel shaft which rides in two bronze bushings. The weight is carried by a heavy-duty ball thrust-bearing which can be picked up at any auto wrecking yard. The base on which the top revolves is a simple standard built from 2-inch by 4-inch timbers grooved down the center and bolted together so as to hold the bushings rigid. Four brackets are cut from 1-inch stock and fastened to the standard and plywood base, completing the tiny merry-go-round. Sand down the edge of the disc so that no rough snags are present, then finish the stool in bright enamels.

During the past few years bicycle riding has proved to be one of the most popular sports among the older children and the increasing number of bicycles about the home premises led to many being broken by automobiles accidentally running over them when carelessly left on driveways by their riders. A “bike” garage is one way to protect the bicycles from accidental breakage and at the same time protect them from the elements.

An individual bicycle shelter is neither difficult to make nor expensive. Consisting merely of a plywood box, open at one end and slotted at the top, upon which is erected a light framework to support a gayly colored awning. While no flooring is provided in the box one can easily be made if desired. Shelves on the inside of the box provide ample storage space for spare tires and tools and other stray articles. Increasing the width of the box permits an additional bicycle, scooter or tricycle to be accommodated.

Protect the “bike” garage from rain by painting it with two coats of good paint or enamel. The ends of the plywood are first shellaced to prevent water seaping in and opening the laminations.

A wading pool is an easily built piece of equipment that will keep small children amused for. hours during the hot summer days. The wading tank is constructed from a good grade of lumber and calked in the same manner as a boat.

First make the bottom of the tank by laying four 3/4 by 9-inch boards on three 2 by 4-inch skids. Bevel the boards before assembling so that a vee groove is formed for calking the joints with candle wicking soaked in marine glue. Fasten down the boards to the skids with countersunk brass or galvanized iron screws, so that they will not cut tiny feet.

Next erect the sides of the tank using three-sided cleats along the joints. The cleats should have candle wicking and marine glue inserted under them before screwing down to the floor of the tank. Four boards, each 9 by 3/4 inches are attached around the top of the tank to form seats for the young bathers. The seat boards are 4 feet 2 inches in length and rounded off at the corners as shown in the perspective plans.

Complete the tank by installing the sprinkler unit. Make this from four lengths of iron pipe connected to form a cross and bent so as to provide a support, at the same time, for the canopy. A hose coupling is provided at the end of one of the pipes and the others plugged up. Small holes drilled in the pipes provide the novel shower effect.