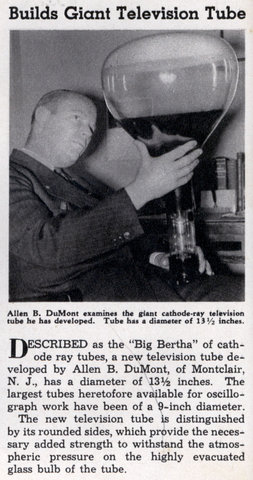 DESCRIBED as the “Big Bertha” of cathode ray tubes, a new television tube developed by Allen B. DuMont, of Montclair, N. J., has a diameter of 13-1/2 inches. The largest tubes heretofore available for oscillograph work have been of a 9-inch diameter. The new television tube is distinguished by its rounded sides, which provide the necessary added strength to withstand the atmospheric pressure on the highly evacuated glass bulb of the tube.