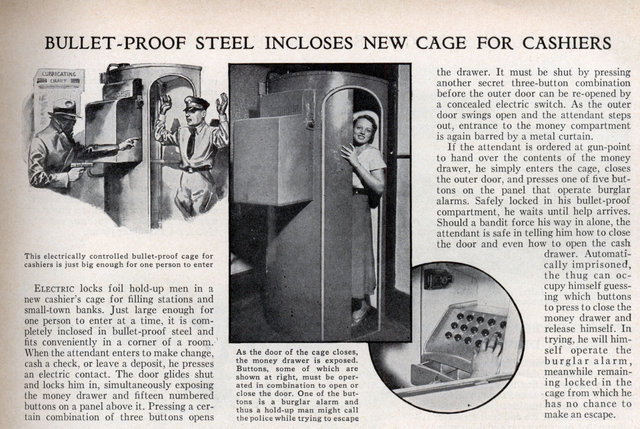 Electric locks foil hold-up men in a new cashier’s cage for filling stations and small-town banks. Just large enough for one person to enter at a time, it is completely inclosed in bullet-proof steel and fits conveniently in a corner of a room. When the attendant enters to make change, cash a check, or leave a deposit, he presses an electric contact. The door glides shut and locks him in, simultaneously exposing the money drawer and fifteen numbered buttons on a panel above it. Pressing a certain combination of three buttons opens the drawer. It must be shut by pressing another secret three-button combination before the outer door can be re-opened by a concealed electric switch. As the outer door swings open and the attendant steps out, entrance to the money compartment is again barred by a metal curtain.

If the attendant is ordered at gun-point to hand over the contents of the money drawer, he simply enters the cage, closes the outer door, and presses one of five buttons on the panel that operate burglar alarms. Safely locked in his bullet-proof compartment, he waits until help arrives. Should a bandit force his way in alone, the attendant is safe in telling him how to close the door and even how to open the cash drawer. Automatically imprisoned, the thug can occupy himself guessing which buttons to press to close the money drawer and release himself. In trying, he will himself operate the burglar alarm, meanwhile remaining locked in the cage from which he has no chance to make an escape.