Popular Mechanics
Issue: May, 1924
Posted in: Crime and Police, Scary
7 Comments on BULLET-PROOF VEST RESISTS FIRE OF THREE PISTOLS (May, 1924)

Doesn’t this still bruise the hell out of you? Who were these “young women” who let people shoot at them? 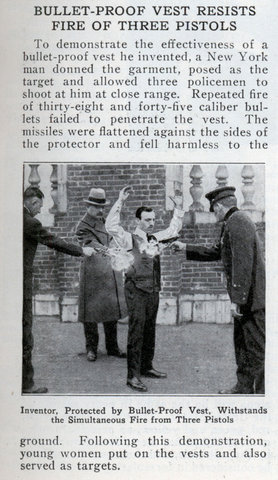 To demonstrate the effectiveness of a bullet-proof vest he invented, a New York man donned the garment, posed as the target and allowed three policemen to shoot at him at close range. Repeated fire of thirty-eight and forty-five caliber bullets failed to penetrate the vest. The missiles were flattened against the sides of the protector and fell harmless to the ground. Following this demonstration, young women put on the vests and also served as targets.