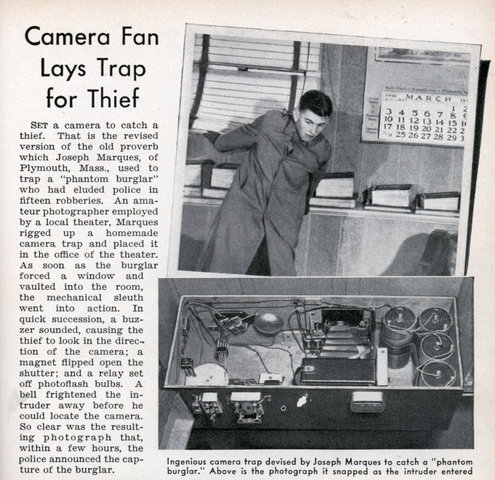 Set a camera to catch a thief. That is the revised version of the old proverb which Joseph Marques, of Plymouth, Mass., used to trap a “phantom burglar” who had eluded police in fifteen robberies. An amateur photographer employed by a local theater, Marques rigged up a homemade camera trap and placed it in the office of the theater. As soon as the burglar forced a window and vaulted into the room, the mechanical sleuth went into action. In quick succession, a buzzer sounded, causing the thief to look in the direc^ tion of the camera; a magnet flipped open the shutter; and a relay set off photoflash bulbs. A bell frightened the intruder away before he could locate the camera. So clear was the resulting photograph that, within a few hours, the police announced the capture of the burglar.