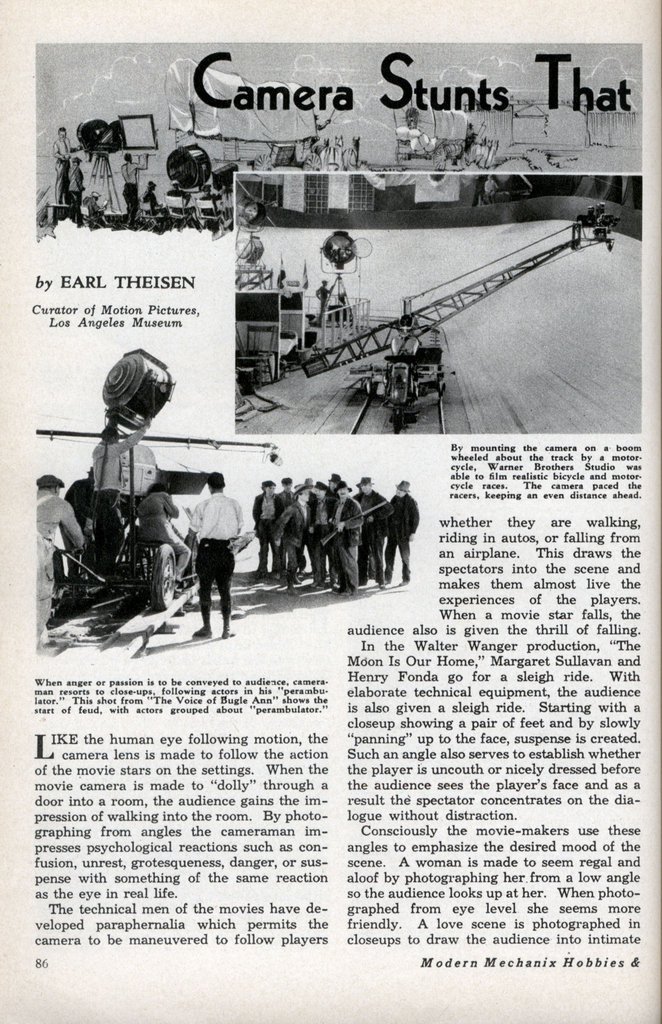 LIKE the human eye following motion, the camera lens is made to follow the action of the movie stars on the settings. When the movie camera is made to “dolly” through a door into a room, the audience gains the impression of walking into the room. By photographing from angles the cameraman impresses psychological reactions such as confusion, unrest, grotesqueness, danger, or suspense with something of the same reaction as the eye in real life.

The technical men of the movies have developed paraphernalia which permits the camera to be maneuvered to follow players whether they are walking, riding in autos, or falling from an airplane. This draws the spectators into the scene and makes them almost live the experiences of the players. When a movie star falls, the audience also is given the thrill of falling. In the Walter Wanger production, “The Moon Is Our Home,” Margaret Sullavan and Henry Fonda go for a sleigh ride. With elaborate technical equipment, the audience is also given a sleigh ride. Starting with a closeup showing a pair of feet and by slowly “panning” up to the face, suspense is created. Such an angle also serves to establish whether the player is uncouth or nicely dressed before the audience sees the player’s face and as a result the spectator concentrates on the dialogue without distraction.

In “The Moon Is Our Home,” Miss Sullavan is portrayed as a temperamental, though lovable, young movie star. First she is shown in a closeup on the floor which also takes the audience to the floor. Then the camera eye seems to back up and follow her in a longer shot as she “bounces” up in a tantrum and throws herself on a couch. In the second angle the spectators are looking down on her and the reaction, which of course is reinforced by the narration and dialogue, is one of unfriendliness. The fact that she is first shown friendly followed by a longer shot in a tantrum surrounded by sumptuous props convinces the audience that she is spoiled though not a bad sort of person.

The scene is filmed in one long continuous sequence without “cuts” so as not to interrupt the thought flow. The mechanical equipment used to get this sort of “shot” is called a “boom” by which the camera, cameraman and crew, and director are maneuvered to any position to follow the action of the players. The “boom,” made of steel and weighing ten or twelve tons, has a long crane arm at the end of which is a platform with seats and turret for the camera. Like a steam shovel, the camera may be maneuvered to any desired angle from the floor to twenty feet aloft.

One such “boom” can hoist the camera and crew forty-five feet high for filming shots where the players are climbing stairs or where “pan” shots up the sides of buildings are needed.

With a reaction that is kindred to the one when persons look down from heights in real life, the camera creates suspense and unreality when photographing downward. Shooting a scene from the floor up, or from an unnatural angle as when the camera is tipped, creates an impression of grotesque-ness. This effect of tipping the camera and using unnatural angles was used in the picture “Big Brown Eyes” in order to excite the audience and to create an emotional effect By using short scenes of different players “shot” from assorted angles, which flashed on the screen with a jarring effect called “montage,” George Clemens, the cameraman, conveyed the effect of breathlessness and excitement. “Montage” is used to increase the tension and speed the tempo.

Almost invariably “long shots” are used to introduce a film by showing where the story is laid. The camera is “panned” up close and the action and the dialogue of the players unfolds the plot. If the setting were in a tenement district the “long shot” would establish that fact and “set” the audience for the ensuing development of the story; whereas if the impersonal long shot were not used, but instead the star was shown literally “dumped” into a shoddy scene the reaction would be one of shock or sympathy depending on the characterization. If the player is a lovable character, the general reaction is one of sympathy when he is suddenly shown in a shoddy setting. The effect is enhanced by using a softer focus, or where the shabbi-ness of the scene is to be emphasized the details are focussed in what is known as “wire-sharp.” By shooting from such angles to associate certain props with the player various dramatic thoughts are introduced.

The “perambulator” shots in which the camera follows the players about are perhaps the most widely used. The perambulator is a small rubber-tired truck arrangement with a platform a few inches from the floor. On the steel platform is a motor driven turret adjustable to any angle to six or eight feet. Seats which accommodate the director and cameraman are provided and the whole device is pushed about by assistants. With the perambulator it is possible, for example, to fellow the players as they walk in the garden and sit down on a bench, all the while keeping them in a closeup just as if the audience also were taking the walk.

Where the floor or ground of the setting is uneven tracks of wood or steel are laid for the perambulator which weighs about 600 pounds. Jars of unevenness in the filming as the camera moved would make the audience conscious of the movement, thus destroying the “closeness” of the audience to the action. In a desert sequence of the picture “Palm Springs,” Leon Shamroy, the cameraman, laid

300 feet of track so the perambulator could smoothly follow the action. In another scene in this picture, because it was impossible to follow horses in a straightaway, horses and riders moved in a circle around the camera which “panned” to keep them in a closeup. When the film is seen on the screen the horses seem to travel in a straight line parallel to the camera.

In boat or streetcar scenes a platform on wheels which runs on tracks is made for the camera so that the conveyance and camera move together.

In most instances where the stars seem to be riding in autos, airplanes, or other conveyances, “process photography” is used, so closer or smoother scenes may be had and so the players won’t need to leave the studio sound stages. For example, in the recent airplane scenes where closeups are shown, the airplanes were suspended by invisible wires from the roof of the sound stage and then behind the plane was placed a projection screen on which was projected a movie of the desirable background previously taken from the air. The camera “shot” both the actors in the plane and the movie on the screen with the illusion that the plane was actually flying. The effect of movement is gained by the relative action of the background movie.

When the actors are shown in closeups on roof tops “high parallels” or platforms support the camera and crew.

Like the difference in music between noise and tone, in the movies there is a difference in motion conveyed by the movement of the camera. This psychological effect of movement may be called “cinematics.” Jarring or sudden changing of angles rather than a smooth transition, agreeable lines for an agreeable effect, or a pleasant distribution of props instead of a confusing one, all stimulate the emotional effect of the film just as rhythm affects music. The angle at which a scene is photographed is largely responsible for the dramatic movement and pictorial aesthetic value. By photographing from different angles the cameraman punctuates the mood.