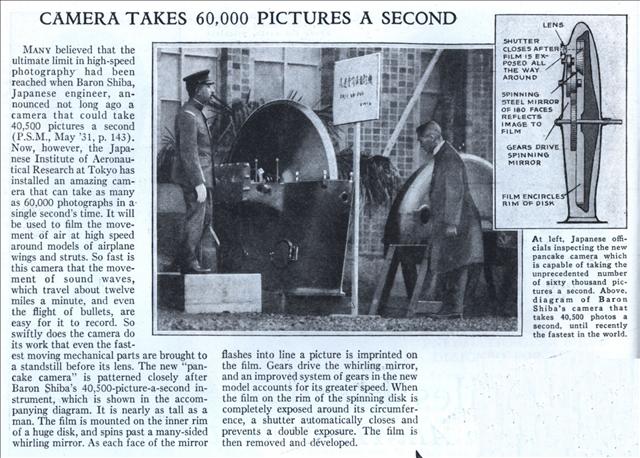 Many believed that the ultimate limit in high-speed photography had been reached when Baron Shiba, Japanese engineer, announced not long ago a camera that could take 40,500 pictures a second (P.S.M., May ’31, p. 143). Now, however, the Japanese Institute of Aeronautical Research at Tokyo has installed an amazing camera that can take as many as 60,000 photographs in a single second’s time. It will be used to film the movement of air at high speed around models of airplane wings and struts. So fast is this camera that the movement of sound waves, which travel about twelve miles a minute, and even the flight of bullets, are easy for it to record. So swiftly does the camera do its work that even the fastest moving mechanical parts are brought to a standstill before its lens. The new “pancake camera” is patterned closely after Baron Shiba’s 40,500-picture-a-second instrument, which is shown in the accompanying diagram. It is nearly as tall as a man. The film is mounted on the inner rim of a huge disk, and spins past a many-sided whirling mirror. As each face of the mirror flashes into line a picture is imprinted on the film. Gears drive the whirling mirror, and an improved system of gears in the new model accounts for its greater speed. When the film on the rim of the spinning disk is completely exposed around its circumference, a shutter automatically closes and prevents a double exposure. The film is then removed and developed.